When Glorette Picard is found dead in an alley, those who knew her struggle to come to terms with her death and discover the killer, all the while finding out how intertwined her life and death was with the dark history of her city, Rio Seco.

NPR stories about Between Heaven and Here 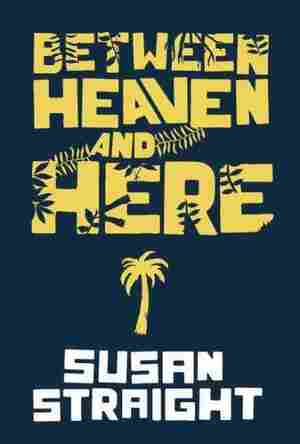 December 5, 2012 • NPR's Karen Grigsby Bates profiles novelist Susan Straight, who is putting her hometown of Riverside, Calif., on the literary map. Straight herself is white, but she weaves the black, working-class voices of Riverside into her work.

Excerpt: Between Heaven And Here

"Why you waste your money here?" she asked Sisia. The smell of the chemicals at the nail salon went through Glorette's eyes and into her brain. Passed right through the tears and the eyeball. Through the iris, she thought.

"Not a waste," Lynn Win said, moving around Sisia's hand like a hummingbird checking flowers. Like the hummingbird that came to the hibiscus in front of The Lamplighter Motel. Mrs. Tajinder Patel's hibiscus. "Only to you," Lynn Win said.

"Please." Glorette walked into the doorway to breathe and looked at the cars roaming past the strip mall. Every strip mall in Rio Seco, in California, in the world, probably, was like this. Nail salon, video store, doughnut shop, liquor, and Launderland and taqueria. All the smells hovering in their own doorways, like the owners did in the early morning and late at night, waiting.

Like she and Sisia hovered. Sundown first, Launderland in winter when it was cold in the alley, taqueria when the cops cruised by. All the standing and waiting between jobs. They were just jobs. Like clean the counter at the taqueria. Take out the trash. Uncrate the liquor. Wash the sheets. All up and down the street. Lean against the chainlink fence, against the bus stop but you couldn't sit on the bench, shove your shoulder into the cinderblock wall outside Launderland and even sleep for a minute, if the fog settled in like a quilt, like the opposite of an electric blanket, and cooled off the night.

Not now. Hot as hell til past midnight.

The nail polish vapors stung her eyes. Why you couldn't get high off these fumes? So convenient. 7-Eleven was a convenience store. Easy. She could sit here and close her eyes and Lynn Win would paint her like a statue and the vapors would rise up into her mouth and nose and make the inside of her forehead turn to snow. She would pay Lynn Win. Instead of paying for the rock to turn into fumes.

The plant to a powder to a chunk — a clover burr in your hand. And then it turned red and glowed, like a rat's eye in the palm tree when you looked up just as headlights caught the pupils. Did rats have pupils?

Then you breathed in. And behind your eyes, it was like someone took a white-out pen and erased everything. Your whole head turned into a milkshake. Sweet and grainy and sliding down the back of your skull.

Look at all these nail salons. She turned the pages of the advertisements in Vietnamese, the flyer on the coffee table. Massage pedicure chairs. Swirling water. The women with perfect eyebrows and lips and hair. Every other one name Nguyen.

Linh Nguyen. Lynn Win told Glorette she changed her name to make it easier for Americans to write on checks. "Win like money I get."

Glorette breathed again at the open salon door. "Sisia. Please. Tell me you ever heard a man say, 'Girl, I love those nails. That color's perfect with your clothes. The decals are fresh.'"

"Shut up, Glorette. You just cheap."

Lynn Win glanced up at her and frowned, her perfect Vietnamese face sheened with makeup, her eyes encircled by a wash of pale green, her lips pink as watermelon Jell-o. Against her neck, on the left side, was a scar. A healed gash that must have gaped, against tight neck skin.

No one had loose neck skin until forty. She must be about thirty-five, Glorette thought. Just like us.

Sisia had a scar on her neck, too, a keloid caterpillar, shiny as satin. Curling iron. Sixteen. They'd been getting ready for some high school dance. Back when Sisia still hot-combed her hair and then curled it back like Farrah Fawcett and Jayne Kennedy.

What did the DJ play at that dance? Cameo? She'd have to ask Chess when she saw him next time. Bar-Kays? "Your Love Is Like the Holy Ghost."

The hot air at the door mixed with the cold AC and nail polish fog.

No scars. She had never done anything with her hair other than wash it, comb in some Luster Pink or coconut oil, and let it hang loose in long black ripples. Back then. Now she wore it in a high twisted bun every night, unless a man told her to unpin it. Put all that hair right here. Hurry up.

This new woman cruising Palm in the brown van had poked her finger into the bun a few nights ago and then pulled. "Man, I know that shit ain't real," the woman had said, her voice New York like rappers on a video, her words all pushed up to the front of her lips. People from New York kept their words there, just at their teeth, not deep in their throats like Louisiana people. Like her mother and father.

Then the new woman had said, "I-on't-even-care you think you the shit around here. Just cause you light. Cause you got all that hair. Anybody get hair. Bald man get hair if he want to. You need to move your ass off this block. Cause I'm parked here."

She couldn't have been more than twenty, twenty-two. Short, thickthighed in her miniskirt, her hair in marcelled waves close to her forehead. Her words moved behind her lips and her lips moved like a camel's, while her eyes stayed still.

"Sound like she said she some pork," Sisia said, hands on her hips.

Glorette just shrugged and looked back over her shoulder at the woman near her van. That's where she worked the men. She had a CD player in there, and some silk sheets, she said. And her man stood in the doorway of the liquor store for a long time, watching Chess and Reynaldo and the others who were just biding their time.

"I ain't no crack ho," the girl called, and Sisia laughed.

"This ain't the nineties." The girl shot them the finger.

"And I ain't Donna Summer."

Glorette watched Sisia move her head on her neck like a turtle and stalk away, and she followed.