When the hijacking of a commercial jet over the Atlantic Ocean is thwarted, iconoclastic New York Police detective Jeremy Fisk — believing that this is more than a simple open-and-shut case of an attempted terrorist act — and his partner Krina Gersten match wits with opponents who are smarter and more agile than any they have ever faced.

NPR stories about The Intercept 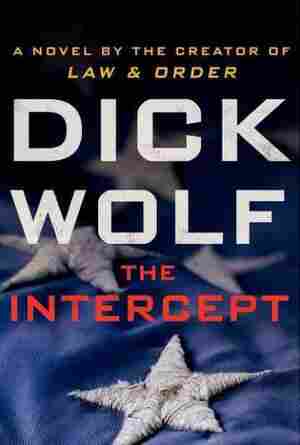 December 26, 2012 • The Law & Order creator's detective fiction debut is set in New York after the killing of Osama bin Laden. Although The Intercept borrows stylistically from Wolf's television background, he says novel writing allows him "to tell bigger stories on a bigger canvas."

Bassam Shah had driven through a day and two nights from Denver, stopping only for gas, eating fried pies, drinking Red Bull, and urinating into a plastic milk jug between gas station fill­-ups.

At dawn, in the chaos of merging lanes on the New Jersey side of the George Washington Bridge, orange traffic cones squeezed the cars to the right. Port Authority Police cars blocked the available lanes, routing all visitors to the city to a checkpoint just beyond the tollbooths. Commuter congestion into New York City was building at that early hour, though still not at its heaviest.

Two men in blue Windbreakers and baseball hats waved flash­lights up ahead, peering into a car's rolled­ down windows. They wore wires in their ears.

Shah saw no dogs. For that, he was relieved. He was ten cars back from the search point.

He watched the driver, a man traveling alone like him, get out to open his trunk. The searchers — now he saw the words port au­thority police on the backs of their jackets — shined their lights inside. They lifted the mat off the spare tire, conferred ...

Shah had to risk it. The decision was not a difficult one. If he fled, they would stop him and search him intimately and rejoice at dick wolf their success. Instead, he made himself small, exactly as he had been trained to do, settling into the persona of a grateful immigrant.

His story — he was driving into New York to check on his fam­ily's coffee cart — had the benefit of being the truth. It was verifiable. Truth by admission was imperative in a situation such as this one.

He eased the Ford Taurus forward, warm vent air breathing on him, soothing him. It was a muggy early autumn morning. He counted down as each driver was quizzed, each car scrutinized.

When his time came, he lowered his window and faced his inter­rogators.

"Where are you going?" asked the younger of the two black cops, shining his light in Shah's face.

"To Queens," Shah answered. He felt his confidence ebb as the words left him. Something felt wrong here. But to be this close and fail was impossible. He had felt certain the police were watching him in Colorado. But his cross­-country drive had been uneventful. He had to push past his self­-consciousness.

"You are coming from where?" the cop asked.

All true. No lies.

The cop nodded. Truth or lies, it did not seem to matter much to him. "Step out of the car, please."

Of course they would make him get out. Shah was an Afghan, twenty­-four years old, with caramel skin. His neck beard, hair, and eyebrows were all reddish brown. Physically, Shah fit every little box on their desperately simplistic checklist of profiling character­istics. The embodiment of what many Americans considered a dan­gerous man.

He clicked open his seat belt obediently, attempted a smile, and emerged before the great bridge in the warm air over the Hudson River.

The other policeman leaned inside the open car door, scouring the front seats with his flashlight as though it were a laser irradiating the floorboards and upholstery in search of clues.

"Mind unzipping that?" the cop said, stabbing his light beam at the Nike gym bag on the backseat.

Shah could have refused. He knew his constitutional rights under U.S. law; indeed, most every Afghan in the States knew these laws by heart. These men had no warrants, but they could "ask" him to accompany them somewhere else for more searching. All they needed was a pretense. Such was the thin thread upon which Shah's freedom now hung.

He pulled out the bag, feeling the heat of the high­ candle power flashlight beam upon his tan hands. He opened it, removing a long head wrap, bunching it in his hands. He pulled out two robes thick with a few days' body odor. He pulled out a half­-burned candle and sticks of incense.

In other words, he had exactly what these men expected an Afghan to have.

They peered further inside, touching nothing with their blue­ gloved hands. Shah's laptop case was on the seat next to the bag; he showed it to them, and they were satisfied. They asked him to open the trunk and he complied. They discovered nothing there except the spare tire, a basic tool kit, and some grime.

And then it was over. They nodded to the driver's seat as a ges­ture that they were done and looked to the next vehicle. Shah de­ferred to them without making eye contact, got into the rental car, buckled up, and drove away.

All along the bridge, spangles of light glistened off the morning dew that coated the thick steel cables. Below, the running lights of barges on the Hudson River dimmed as though in awe of the dawn­ing sun.

He felt great exhilaration at having passed the checkpoint, which was meant to discourage interlopers, but in fact seemed to him now like a threshold.

He was inside now. And it had been easy.

At the same time, Shah's anger began to rise anew. He cursed the deference the bridge trolls forced him to adopt. He was a man who valued his dignity. So he took in the beauty and magnificence of the view with a sneer.

As the city passed across his windshield, Shah's confidence re­turned, knowing that the detonators were securely fish­-lined into the passenger­side air­ conditioning vent.