A Black Woman's Life and Liberation in Heavy Metal

Title
What Are You Doing Here?
Subtitle
A Black Woman's Life and Liberation in Heavy Metal
Author
Laina Dawes

A Canadian music critic and heavy metal fan describes her experiences at rock shows, where she is often the only person of color in attendance and discusses her headbanging heroes with other black punk, metal and hard rock fans.

NPR stories about What Are You Doing Here? 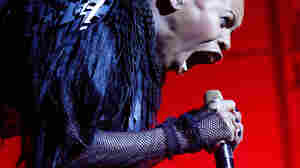 The singer Skin of Skunk Anansie performs at Brixton Academy in London last month. She wrote the foreword to Laina Dawes' What Are You Doing Here?: A Black Woman's Life and Liberation in Heavy Metal. Simone Joyner/Redferns via Getty Images hide caption

January 4, 2013 • Writer Laina Dawes has loved heavy metal ever since she got her first Kiss album at age 8. But the metal community hasn't always loved her back, as she explains in her book What Are You Doing Here?

Excerpt: What Are You Doing Here?

Chapter 4. So You Think You're White?

In my late teens I went to a visit a friend who had left our hometown to attend university. I met her boyfriend, who was very popular on campus and basically a know-it-all. Steve was white, tall, and gorgeous. Despite coming from a very small town where there were few people of color, he seemed fascinated with black culture and hip-hop, and he had a penchant for black women.

My friend introduced us, and as we got to know each other, he asked me about the music I liked. When I listed some alternative, punk, and metal bands, he seemed disappointed. "Where is your family from?" he asked. I explained that I was born in Toronto but adopted into a white family that lived in the same town where my friend and I grew up. "Oh. So that explains it," he said. "You're really white." "Excuse me? Do I look white to you?"

To him, I was white because my family was white, and that explained my taste in music. I responded that neither my siblings nor my parents listened to the same music as I did. Despite the lack of melanin in their skin and the number of classical musicians in my father's family, their skin color — and mine — had nothing to do with our musical tastes.

What bothered me was the presumption that I was purposefully distancing myself from my blackness, and that growing up in a predominantly white, rural environment, I had somehow lost my "black pass" along the way. That was not the first time I had been told that my musical preferences and my transracial adoptee background made me more white than black, and it wasn't even the most insulting of the several occasions. Truth be told, I was probably better versed in black culture than his black girlfriend. I was used to having my blackness questioned. I found out who I was on my own. I knew that I had a choice: Be proud of who I was, or be swallowed by self-hate. I refused to let anyone get the better of me, and chose the former.

Despite my militant sense of self, some of the most hurtful comments I have experienced have come from boyfriends, coworkers, friends, and family members who felt more comfortable with conformity than with individuality. Black communities are bound together by sets of expectation, whether we live surrounded by black folks or not. It's hard to repeal silent codes of conduct that rule out behavior that our families and even strangers warn us about exhibiting in public.

During the 1990s grunge era, when tattoos and piercing came into fashion and even celebrities dressed in secondhand lumberjack jackets and ripped blue jeans, that prevailing fashion was not okay for everyone. I got dirty looks from black strangers for dressing in grunge chic, peppered with sneers of "dyke" and "who do you think you are?" Hell, even Marc Jacobs designed a grunge-inspired clothing line. But as a black girl who dressed the part, I was made to feel like an embarrassment to my race.

Technically, at least, not much stands in the way these days of black girls getting their hands on any music they like. All web searches are created equal, and the same goes for MP3s and digital downloads of entire albums, allowing for discovery of the widest variety of music. Teens today don't even need access to their family stereo, as was the case long ago. Thanks to portable music players and wireless laptops, parents have less control over what their children are listening to.

Yet the resistance continues on a few levels. More than ever, I'm finding black kids who never knew a time when hip-hop didn't exist, and never even considered listening to anything other than what they have been told is a suitable soundtrack for black people. Hip-hop is regarded either as providing a realistic narrative of urban life, or projecting the fantasy life of a singer, a producer, or a rapper.

A black metalhead can be perceived not only as an affront to the past and present struggles black people have endured, but as a personal insult to those closest to them. "Some people, especially older people, feel that you are indifferent to being black because are not listening to or respecting, quote unquote, 'our' music," says Sameerah Blue. "They think you're indifferent to your culture, you're indifferent to being a black person. They look at it as more than a series of songs, and more about the bigger picture."

Every black person in North America is somewhat aware of prevailing societal assumptions, and must struggle to rise above them. Sharing certain commonalities — like dialect, dress, dating, and music preferences — signifies to other blacks that you show pride in who you are as a black person. For anyone who chooses not to adopt those cultural signifiers for whatever reason, the choice is seen as a rejection, even an insult. The status quo has questions ready for this: Do you think you are better than me? Why don't you want to be like us?

In the 1903 essay "Of Our Spiritual Strivings," from The Souls of Black Folk, W. E. B. Du Bois wrote about the polarization between blacks and whites at that time. He identified the danger of people trying to change their identities to conform to how others perceive them, abandoning what they know to be their true selves. He described this process as "a loss that leads to self-doubt, depression, and isolation." Perceptions of black people already led to sweeping generalizations about the entire population, limiting creative and professional opportunities and hindering them from developing their individual identities. Why impose limits from within?

Though still an important issue, altering one's behavior to conform to a set of expectations and adopting a proper dialect in public are not as necessary as they were in the 1960s to ward off police harassment, workplace discrimination, or physical harm. Most likely, the parents of today's teens grew up in the post–civil rights era, with less stringent rules about how to present themselves in public in order to avoid trouble. Yet there is a sense of silent dread of someone outside black communities observing one black person acting out in a way that would negatively shape ideas about the black population as a whole.

Many of the women in this book discussing their lives in the metal, hardcore, and punk scenes felt the threat of losing their black cultural identity. They worried about being perceived as wanting to distance themselves from their culture or race. Believe it or not, blacks and nonblacks both commonly assume that black people get into heavier musical genres to shed their blackness — that we do not like ourselves and, worse, that we do not like others who look like us. Nothing could be further from the truth.

From What Are You Doing Here?: A Black Woman's Life and Liberation in Heavy Metal by Laina Dawes. Copyright 2012 by Laina Dawes. Excerpted with permission of Bazillion Points.