Amar'e has been focusing so much on basketball that he is unable to help his dad at work. Meanwhile, older players are teasing him on the court. When an eye injury forces him to take time off from the sport, he discovers an opportunity to bond with his father. Illustrated by Tim Jessell. 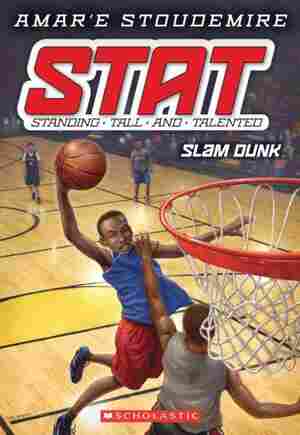 January 12, 2013 • New York Knicks captain Amar'e "STAT" Stoudemire is a six-time All-Star, an education activist and the author of three books for middle-schoolers. In his latest release, an injury helps an 11-year-old STAT learn lessons both on and off the court.

There was no need to split up into teams — they'd already done that before I arrived in Dad's hunk of junk. Coach just stuck me with the guys that were down a player and got things started. Jammer was on my team, but Khalid was on the other side. I looked around at the others, and it really sunk in how big they were. It's not that they were that much taller than me. I was pretty tall — not just tall for my age, but tall for a human. I was already taller than most of my teachers.

But these guys were starting to fill out and add real muscle. I felt like a sixth grader wandering into an eighth grade gym class, which is actually what I was kind of doing. Except instead of phys-ed, these were the best ballers their age. Before I could think anything more, I had the basketball in my hands. The first practice game was underway, and my team had won the tip. The guy D'ing me was named Wayne. He wasn't on me all that tight, so I dribbled it a few times as we headed up the court.

At least the ball hadn't grown any. It felt familiar in my hand, and I started to settle down. The ball was the same size, the court was the same size, and the basket was definitely the same size. And I was good at this. I may not have been as big or as old as most of these guys, but I hadn't just wandered in here off the highway. I was invited to this team, same as them.

A guard from the other team tried to sneak up behind me for the steal. I executed a quick crossover and left him swatting at air. But that reminded me: I wasn't the guy who was supposed to be bringing the ball all the way up the court. I was usually a power forward, but I was basically a swing on this team. That's like a mix of small forward and shooting guard.

I looked for our point guard, a kid named Daniel. We made eye contact. He flicked his eyes to the left. It was a tiny move, but I caught it. He was telling me which way he was going. He burst into the open with impressive speed as I launched a pass, leading him just enough.

He plucked the ball from the air and started dribbling. He got down low so that no one could steal it. But the main thing was the way he dribbled. It was a point guard dribble, like Khalid's: totally comfortable, never looking down, like he was born with a basketball in his hand. I knew our offense was in good hands, so I sprinted over to get position near the hoop.

By the time I did, the possession was already over. Daniel found Jammer cutting to the hoop. Anyone who was wondering where he got that nickname just found out. He rose up like a rocket and threw down a rim-rattling, one-handed jam.

"Come on, Braylon, put a body on that little dude," a low voice rumbled.

In what world was Jammer a 'little dude,' I thought, as I turned to see who'd said it.

"My bad, Monster," said the guy who was supposed to be defending Jammer.

In Monster's world, I realized, everyone was a little dude. A lot of the kids were starting to fill out, but this one straight up looked like a man already. And not a nice man, either. Not only did he have muscles, his muscles had muscles.

He saw me sizing him up and shot me a nasty look. It wasn't mean as much as dismissive, like I was nothing. I ignored him and headed the other way on defense. I don't know if he planned it or not, but after a few quick switches on D, I found myself guarding Monster. It felt like standing in traffic.

We were still up near the top of the key, pretty far from the basket. He turned and started backing me down anyway.

Oof! He bumped into me. I tried to shuffle my feet, lean in, not give too much ground.

OOF! He bumped into me again, harder this time. I reached out and swatted at the ball. His dribble was high and off to the side, and I thought I might be able to knock the ball free. I didn't.

OOF! I looked over at Coach Dunn. He didn't even have a whistle, much less any urge to use it. I'm not sure if Monster could've backed me all the way in to the basket before I got a hand on the ball or had to climb on his back to get a foul. I'm glad I didn't have to find out. Jammer saw what was going on and jumped in to double- team him.

With two pairs of hands swatting at the ball, Monster had to give it up. When he did, our defense reset. Our center, Tevin, hadn't missed any meals himself. He switched back onto Monster. Jammer went back to guarding Braylon, and I switched back onto Wayne. And tried to catch my breath.

We were all getting a little worn down by the heat, and I switched onto a guy whose dribble was high and lazy to begin with. I went for the steal, slapping out with my hand as I darted forward.

I felt the slap of leather against my palm. When I looked up, the only thing between me and the basket at the other end was the ball, bouncing just ahead of me. I was off and running before anyone else knew what was happening. I had such a clear path to the basket that the only person who ran hard after me was the guy whose pocket I'd picked.

I reached top speed by midcourt. By the time I got to the foul line I was thinking about what I wanted to do with the ball: lay it up off the backboard or maybe finger-roll it straight into the hoop. But the one thing I really wanted to do, I couldn't.

Believe me, I'd tried to dunk the ball. I tried it almost every practice. Most of the time, it was just like this, streaking down the court at top speed. If wishing hard made you jump higher, I'd be jamming it by now. But wishing hard just made it hurt more when you doinked it off the rim. And that's what I did when I tried to dunk, unless I lost control on the way up. I was close, but you know how many points you get for close? Zero.

I reached the hoop and laid it up and in.

The players behind me erupted into a chorus of hoots and hollers and laughs. They were waiting for the dunk, too. I turned in time to see the guy I'd stolen the ball from imitating my layup. He raised his front knee high and extended his right hand into the air, palm up. He exaggerated it and put a goofy, tongue-out look on his face.

He'd turned the ball over, but somehow I was the one burning with embarrassment. As I headed back on defense, I heard them all around me. They were talking about what they would've done if they'd had the ball: dunk it two-handed or throw it down with one.

Right then, Khalid took off at top speed with the ball and everyone had to take off with him. Khalid was on the other team, but I honestly think he did that for me, just to shut everyone up. The last thing I heard as I put my head down and started running was: "Nice layup, Pee-wee."

From the low rumble of the voice, I knew it was Monster. But I didn't look at him. I didn't want him to see how much it was bothering me. I was as tall as a lot of these guys, and I definitely worked just as hard: Why couldn't I dunk yet? And why did they all have to know?