Simon Rich's collection of stories explores love in its varied forms: from God and his long-term girlfriend to a girl and her imaginary goat. (Originally published as The Last Girlfriend on Earth). 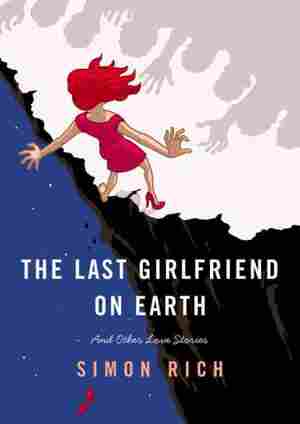 January 15, 2013 • Everyone has relationship problems, even God — at least, according to humorist Simon Rich. His funny, surreal new collection, The Last Girlfriend on Earth: And Other Love Stories, explores dating and relationships, but also magic talking goats and rocket ships.

Excerpt: The Last Girlfriend on Earth

I born in factory. They put me in wrapper. They seal me in box. Three of us in box.

In early days, they move us around. From factory to ware­house. From warehouse to truck. From truck to store.

One day in store, boy human sees us on shelf. He grabs us, hides us under shirt. He rushes outside.

He goes to house, runs into bedroom, locks door. He tears open box and takes me out. He puts me in wallet.

This is story of my life inside wallet.

In middle of wallet, there live dollars. I am less close to them, because they are always coming and going. But they are mostly nice. I meet many Ones and Fives, some Tens, a few Twenties. One time, I meet Hundred. He stay for long time. Came from birthday card, he said. Birthday card from an old person.

When I first get to wallet, I am "new guy." But time passes. I stay for so long, I soon become veteran. When I first meet Jamba Juice, he has just two stamps. Next thing I know, he has five stamps — then six, then seven. When he gets ten stamps he is gone. One day, Learner Permit disappears. In his place, there is new guy, Driver License. I become worried. Things are changing very fast.

Soon after, I am taken out of wallet. It is night. I am scared. I do not know what is happening. Then I see girl human. She is one from photograph. She looks same in real life, except now she wears no shirt. She is smiling, but when she sees me, she becomes angry. There is arguing. I go back inside wallet.

A few days later, picture of girl human is gone.

MetroCard is from New York City and he never lets you for­get it. He has real "attitude." He is yellow and black with Cirque du Soleil advertisement on back.

That night, MetroCard tells me many strange things about myself. At first I do not believe what he says. But he insists all is true. When I start to panic, he laughs. He says, What did you think you were for? I am too embarrassed to admit truth, which is that I thought I was balloon.

It is around this time that we move. For more than two years, we had lived inside Velcro Batman. It is nice, comfy. One day, though, without warning, we are inside stiff brown leather. I am very upset — especially when I see that so many friends are gone.

Only survivors are MetroCard, Driver License, Student ID, myself, and a creepy new lady named Visa.

I am angry. What was wrong with Velcro Batman? It had many pockets and was warm. I miss my friends and I am lonely.

At this point, I am in "panic mode." What is "Film Forum"? Who is "Jordan Hirschfeld"?

Jordan Hirschfeld is same guy as Jordi Hirschfeld, Metro­Card explains. He is just trying to "change his image." I am confused. What is wrong with old image? That night, I poke my head out of wallet and look around pocket. It is dark, but I can see we have new neighbor. He says his name is Cigarettes Gauloises. He is very polite, but I get "weird vibe" from him.

It is about this time that I meet strip of notebook paper. On him is written rachelfeingold@nyu.edu.

I have never been more frightened in my life.

That Saturday, five crisp Twenties show up. I assume they will stay long time, like most Twenties. But two hours later, they are gone, replaced by receipt La Cucina.

MetroCard looks at receipt La Cucina and laughs. She better put out after that, he says. I am confused and worried.

Later on, I am minding my own business, when Jordi (sorry, "Jordan") shoves his finger into me. I am terrified. What was that, I ask. MetroCard grins. He is checking to make sure you're there, he says. For later.

My friends try to calm me down. One of the dollars, a One, tells me about the time he met Vending Machine Pepsi. He was stuffed in and out, in and out, so many times. He almost died. I know he is trying to make me feel better, but I am like, please stop talking about that.

Eventually, the moment comes. It is like other time. I am taken out of wallet and tossed on bed. It is very dark. I can make out shape of girl.

She picks me up and squints at me for a while. Then she turns on lamp.

I am confused. So is Jordan Hirschfeld.

"I think," she says, "that this might actually be expired."

There is long silence.

The girl reaches into her bag.

Part of me kind of wants to watch what happens next. But I am quickly covered in pile of clothes.

When I wake up next day, Jordan is dangling me over trash can. I look down into pit. Inside are Cigarettes Gauloises and Film Forum Schedule. They are talking "philosophy." I sigh. I do not really want to move in with them, but what can I do? I figure this is "end of the line" for me.

Suddenly, though, Jordan carries me away — to other side of room. I am placed inside shoe box under his bed.

At first, I am afraid, because it is dark, but as vision adjusts I see I am not alone. There is strip of notebook paper rachelfeingold@nyu.edu. There is receipt La Cucina, on which is now written, "first date."

When I arrive, I am "new guy." But as time passes, I become veteran. I welcome many new friends: Birthday card Rachel. Happy Valentine's Day Rachel. And many, many Post­it Notes Rachel. I love you, Jordi. Rachel. Good morning, Jordi! Rachel. Everything in here is Rachel.

I do not know how things are in wallet these days. But I am glad to be in shoe box. I feel as if I have "made it." I am happy. I am warm. I am safe.