Seth Weinstein is on his way to his destination wedding in Florida. He has survived an airport prank by his groomsmen, and he thinks it's going to be smooth sailing from now on. Little does he know what's in store: Russian gangsters, angry strippers, a pimp as big as the Death Star, a desperate Haitian refugee and her two children on the run from some very bad men, and an 11-foot albino Burmese python named Blossom. 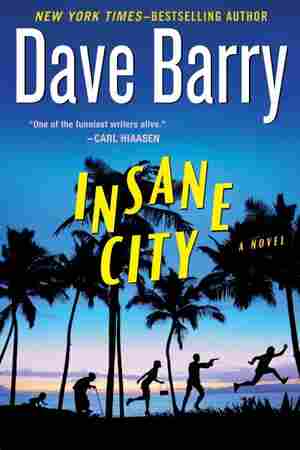 January 26, 2013 • In Dave Barry's latest novel, a bachelor dinner goes off the rails, entangling the groom to be with a colorful cast of characters — everyone from Russian mobsters to Haitian refugees to the fourth-place finisher in the Miss Hot Amateur Bod contest. Oh, and an albino Burmese python.

The rehearsal dinner was held in a private banquet room in the hotel's upscale Italian restaurant. On hand, besides the wedding party, were several of Tina's relatives, as well as Wendell and Greta Corliss, who were included as part of Mike Clark's full-court press on Wendell. The diners sat at one long table, with the Clarks and Corlisses at the end farthest from Seth's parents.

The dinner, which was paid for by the Clarks, was first class. The wine was both expensive and plentiful; as it flowed, the lingering tension of the rehearsal receded from the room. Seth and Tina sat at the center of the table, the two of them feeling closer than they had since they'd arrived in Miami.

The food came in courses, each more delicious than the last. Finally, when everyone was stuffed, it was time for the serving of the Groom's Cake. The Groom's Cake is allegedly an old Southern wedding tradition that nobody ever heard of until about five years ago when the wedding industry, always on the lookout for ways to make weddings more expensive, started hyping it. The idea is to have a special cake just for the groom, reflecting some special thing about him. Tina had commissioned a high- end New York cake designer to produce a cake shaped like a football, sporting the logo of the New York Giants and an amazingly lifelike portrait, in frosting, of Eli Manning. This cake was to be a surprise, presented to Seth by Tina at the end of the dinner. For now, it was hidden under a silver dome on a cart near the end of the table.

Also at that end of the table were Rose and Sid. They had been fairly well-behaved for most of the meal, but now Sid, declaring that his back was bothering him, had started pestering Rose for his medication, by which he meant one of the brownies that Rose's sister Sarah sent them from California. Rose was inclined to let Sid have one; she was thinking she wouldn't mind having a brownie herself.

Rose and Sid had both become quite fond of these brownies. Sarah baked them herself using high- grade medical marijuana, which she added in far larger quantities than the standard recipe called for on the theory that if some medicine is good for you, then more medicine must be better for you. These were potent brownies. Both Sid and Rose had found that no matter what was ailing them, they felt a lot better after eating one. Sometimes they completely forgot what had been ailing them in the first place. Once Rose had gone to the kitchen to get Sid a glass of water and had become fascinated by the water running out of the kitchen faucet. She wound up staring at the glittering cascade for more than an hour, barely moving. Sid, sitting in the living room, had not minded; he was engrossed in listening to the subtle and fascinating interplay of droning sounds made by the vacuum cleaner, which Rose had left running.

As the rehearsal dinner approached the dessert course, Rose decided it was time for her and Sid to take their medicine. She opened her massive purse and took out the plastic box filled with brownies. She set it on the serving cart next to her and began rummaging through her purse, looking for her reading glasses so she could unwrap the brownies.

"I have to go to the bathroom," said Sid.

Rose was about to give her automatic response to Sid, which was that no he didn't have to go to the bathroom, when it occurred to her that maybe he did, as it had been some time since his last trip. She decided she had to go, too. So she closed her purse, stood, and told Sid to come on. The two of them toddled slowly from the room.

On their way out, they passed a waiter coming in. The waiter's name was Miguel; he had been assigned the task of unveiling and serving the Groom's Cake when given the signal by Tina. He positioned himself by the serving cart in the corner and noticed the plastic box sitting next to the silver dome. This did not look right to Miguel. He opened the box and saw that it was filled with brownies individually wrapped in plastic. He assumed that these, like the cake, had been provided by the wedding party; he also assumed that they were meant to be part of the dessert offering and somebody had failed to unwrap them.

Miguel was a man with initiative. Using his body to shield the cart from the rest of the room, he lifted the dome and set it aside, exposing the football cake, which lay in the center of a silver platter. Working quickly, Miguel unwrapped the brownies and positioned them artfully around the cake, making a nice display. Miguel was pleased with his work and his quick thinking. He stuffed the wrappings into the box and tucked it out of sight on the cart's lower shelf. Then he replaced the dome and turned just in time to see Tina signaling him that she was ready to begin.

Tina tapped her water glass with a teaspoon, bringing the table to silence. She rose and made a short, graceful speech, thanking the wedding party for being there. She then signaled Miguel, who rolled the cart to the middle of the table and, with a flourish, lifted the dome. Everyone Oohed at the Groom's Cake; Seth stood and kissed Tina.

Miguel sliced and served the cake, putting a brownie on each plate next to the cake slice. Everyone agreed the cake — Seth's favorite, orange sponge cake with chocolate frosting — was delicious. They also raved about the brownies, especially Wendell Corliss, who considered himself a serious chocolate connoisseur. He declared he had never tasted brownies quite like these. Miguel served him a second one, which he ate. He then asked Mike if he planned to eat his brownie, which was untouched; Mike, who did not like chocolate, said sure, and Wendell wolfed that one down.

The brownies were all consumed; the room was now abuzz with conversation and laughter. More wine arrived, and a selection of liqueurs. Miguel wheeled the dessert cart out. He passed Rose and Sid, reentering the room after the long, slow toddle back from the restrooms. Upon reaching her seat, Rose said, "Where's my brownies?"

Seth's head whipped around. "They're not in your purse?" he said.

Seth lowered his voice. "You didn't order brownies to go with the cake?"

"No. I think the hotel gave us those."

"Actually, I think they were my mom's."

"Oh! Well, that was very nice of her. I didn't eat one, but people seem to really like them."