Poems from the Hanoi Hilton

NPR stories about Taps on the Walls 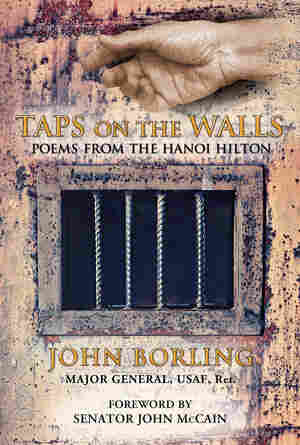 February 12, 2013 • As a prisoner of war in the "Hanoi Hilton," Air Force fighter pilot John Borling spent years composing and memorizing poetry that he tapped to fellow prisoners, like the future Sen. John McCain, using a special code.

Excerpt: Taps On The Walls

Taps on the Walls is a story about the power of the unwritten word. It is a redemptive story—how poetry helped save me during six and a half years as a POW in North Vietnamese prison camps.

My wife would not know if I was alive for years. Somehow, she "felt me" and carried on while all others doubted. My nine-month-old daughter would grow and dream of a father walking her to school one day. I had same dream. She would be seven and a half before our dreams came true. Happy endings would come hard.

For many years, my fellow pilots and I were held alone or in semi-isolation. The enemy wanted us weak, despondent, and totally cut off. Our challenge was to keep the faith, carry on, and stay true to one another. For that, we had to communicate.

Communication among prisoners in different cells was forbidden and severely punished. The enemy called us war criminals and threatened trial and execution. In reality, they were too cruel to kill us and preferred prolonged privation, pain, and humiliation. We struggled with multiple illnesses, untreated wounds, toothaches, horrific heat and surprising cold, lack of food and water, a bucket (often overflowing) for a toilet, and a board with a straw mat for a bed. Thank God for a mosquito net, which they took away in the isolated punishment cells.

So, despite the threat and the reality of pain, we tapped on the walls. The tap code became our lifeline, our means of passing along information and words of encouragement to one another.

The essence of the human condition is the ability to create. Jail me, hurt me, hate me, but the mind and spirit are weapons. No books, no writing materials, nothing—just the mind. Find a way. One of the ways for me was to mentally create poetry. Create poetry and keep it memorized — lots of poetry. It was a way to fight back and provide legacy for my wife and daughter should I not survive. I tapped those poems through the walls and others helped carry that legacy for years.

Forty years ago, I came home and my poems came with me. Intensely private, we kept them that way until pressed to finally publish because the messages have relevance to today and tomorrow. Life lessons and calls to renewal as well as dealing with dragon questing and demon killing are part of the mix. So too, an expressed and inescapable desperation. But, most of us beat the dealer long ago.

The poems remain pieces of my soul. I hope they become pieces of yours.

Another fledgling day departs the hills.

It takes the air as thermaled falcons fly,

And who attends this noble soaring birth,

May marvel from their vantage point on earth,

Yet miss so much, not of the sky's domain.

But I'm not of the earth. At altitude,

I greet the infant day with engine song,

And rare abandon urging me along.

To first-light flight, the one judged best of all.

Excerpt from a Christmas Letter*

And how I've sought that special thought

With meaning just for you.

The memories shared, how dreams have fared,

The things that we will do.

But how to tell, what feelings well,

What message to impart?

So beats my constant heart.

*A Christmas letter of the mind, as there was no mail for many years.

The scepter raised and silent challenge made,

It's now, the victor absent from the field,

Hard pallet draws me, huddled down upon,

Another muddled day has eddied on

To join the addled streams of tousled time.

So armored, sally forth at dawn, consigned

To stand alone, and parry best I can

For time's an old and boring enemy.