The City of Devi

The City of Devi

As Mumbai is evacuated in the wake of a nuclear threat, statistician Sarita resolves to reunite with her missing physicist husband. Journeying through the surreal landscape of a dangerous near-abandoned city, Sarita meets an incarnation of the patron goddess Devi Ma.

NPR stories about The City of Devi 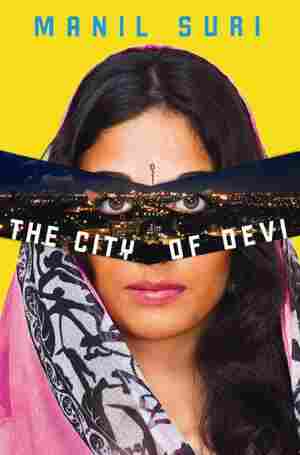 'City Of Devi' Sets A Love Triangle In Pre-Apocalyptic Mumbai

January 29, 2013 • As India and Pakistan inch closer to nuclear war, statistician Sarita teams up with Jaz, who is gay and nominally Muslim, to find her missing husband. Author Manil Suri says he pushed the envelope with his latest novel, the third in a series roughly based on the Hindu trinity.

'City Of Devi' Sets A Love Triangle In Pre-Apocalyptic Mumbai

Excerpt: The City of Devi

Four days before the bomb that is supposed to obliterate Bombay and kill us all, I stand in the ruins of Crawford Market, haggling with the lone remaining fruit seller over the price of the pomegranate in my hand.

"Is five hundred rupees not an outrageous price already? Why won't you sell it to me for five hundred?"

"Look at what's happening around you, memsahib. Do you think the orchards are overflowing with pomegranates? Do you think the lorries are driving into Mumbai every day and filling the markets with fruit? I'm only asking for a thousand because it's you, memsahib, but even three times that wouldn't be too much for this last piece. Which really was the best one in the pile to begin with."

I look at the sign for Crawford Market behind me, still smoldering from last night's air raid (or has it simply been another terrorist bomb?). All around are shops gutted in the fire. Remains of baskets lie scattered on the ground, pieces of fruit too charred for the scavengers to steal rest at my feet. I notice a tangerine that still has its characteristic knob at the top — it has been roasted to a black, perfectly whole crisp. Down the corridor, only one other stall stands intact — a spice merchant who has also somehow escaped the attack. He is using a stick to try and rouse the carcass of a dog that has died in front of his store.

The fruitwalla has a point. Supply and demand, he has me where he wants. This much I know: I must have the pomegranate before I begin my quest — some instinct deep inside insists it's my best shot. But what's tied into the folds of the silk dupatta around my neck is a few hundred less than the fruitwalla wants.

"Bhaiyya, listen," I try once more. "They're dropping the atom bomb this week. Atom bomb, you understand, not some firecracker that's demolished the market around you. On Bombay. Mumbai. Whatever you call it, the city's going to be finished. What would you do even if you did manage to squeeze out the extra money from someone? Take it to heaven with you? And what if nobody else came to your store? — most of the city has fled, you know. Is this what you want to happen to your fruit?" I nudge the tangerine with my foot, and it crumbles into ash.

But the fruitwalla is adamant, he won't sell for less. "It's all up to Devi ma's grace," he says. "She's the city's patron goddess, after all. Now that she's appeared in our midst, perhaps she'll save us, who knows? But even if she doesn't, even if she only lets me hold the money for ten minutes, at least I'll have it for that much time. At least I'll die with an offering for her in my hand."

Suddenly, the futility of what I am trying to do overwhelms me — how ridiculous to put such hopes in a pomegranate! I look at the smoke billowing out of the buildings in the distance and smell the soot that hangs everywhere. The garbage collecting for days, the stench of bodies rotting in the air. Ever since I started my vigil for Karun eighteen days ago, I've kept close to my building complex, sheltered from the mayhem. Trying not to obsess over where he might be now, why he left. With the internet dying out, together with phones, radio and television, even electricity, my only news about the outside has been through tidbits from our lone remaining watchman. Seeing the devastation all around today fills me with disbelief — the city, as I knew and loved it, is gone. Somewhere towards Metro, a gun fires three times—looters, probably, executed by the police. Or perhaps by vigilantes, the police force, according to our watchman, having also fled. I wonder what would happen if I bolted—wrapped the pomegranate in my dupatta and leapt over the rubble that used to be the entrance. Would the fruitwalla run after me? Would the vigilantes fire at me as well? Surely their code of conduct must frown upon the gunning down of women?

Perhaps the fruitwalla sees the calculation on my face, because he takes the pomegranate from my hand. He eyes me carefully, and I see him appraising the mangalsutra I wear. Has it been two years already since our marriage when Karun tied it around my neck?

I run the black beads of the necklace through my fingers, I feel the gold pendant. What difference does it make if I die with or without it? — at least this way I will feel I have a chance. I take off the mangalsutra and hand it to the fruitwalla. He drops the red and heavy orb, that is to give me Karun, back into my palm.

"Five hundred more, memsahib," he cries after me, remembering that I must have at least that much money. I do not turn around.

Now that I've accomplished this goal, I'm overwhelmed by the enormity of what remains. This morning when I informed the watchman that I, too, was leaving "for a while" like most of the other residents already had, the sole imperative in my mind was to find Karun, or risk everything trying. I couldn't bear to waste another day waiting for him, not with so little time left before the promised end. Except I didn't pause to formulate a strategy — I have no game plan on how to get to him. The last time we spoke, before the phones all jammed, he called from the conference center in Bandra, several miles north. Perhaps I can take a bus, I think to myself, before remembering the roads are bereft of traffic: anything with wheels and petrol driven off in the scramble to evacuate. Even the police station near the market lies deserted, stripped of all its jeeps. My only far-fetched hope is there might still be a stray train. I decide to head towards Metro Cinema and the railway station beyond.

The art deco "Metro" sign beckons as resplendently as ever from the edge of the building, but the adjoining wall and roof have been blown off. Banks of rubble-covered seats rise from the ruins like a multiplex of just-excavated coliseums. In the lobby of the theater, arranged faceup next to each other, lie three bodies with neat bullet holes in their foreheads. They are surrounded by a TV set, a car stereo, and several cell phones, with a sign above their heads that reads, "Thief does not pay." Some passer-by has deposited flowers at their feet. Why steal a TV when there hasn't been a broadcast for so long? I think of myself laid out next to them, the pomegranate positioned as a warning above my head.

I walk along the side of the building, past the broken windows and empty frames for coming attractions. An old poster of Superdevi lies among the glass shards, showing the girl goddess flying triumphantly over the city's skyscrapers. I remember the throngs when the film opened on all six screens, the advance booking lines stretching around the block. How innocuous everything seemed when it was released. Who would have ever thought a movie could lead us this far?

Karun and I went some weeks after its release — it was the first movie we saw together. Sitting by his side, I sensed his shyness thicken in the dark until it hung like a scrim between us. Would he reach through it for my hand? I wondered, did he share the attraction I felt? Would we ever be like a Bollywood couple, so joyously in love that we sang in gardens, danced around parks?

Before I can lose myself in such thoughts, the air raid siren goes off.