A Memoir of Marriage (and Other Affairs)

Writing as both betrayer and betrayed, Wendy Plump explores the infidelities of her marriage. 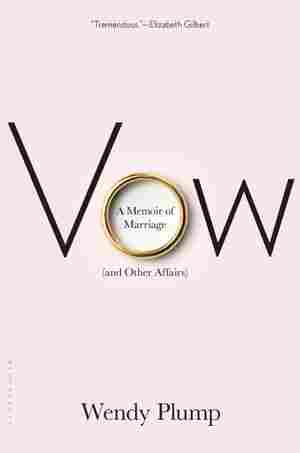 February 14, 2013 • By the time Wendy Plump learned that her husband had a longtime mistress and an 8-month-old son, their union already bore the scars of adultery — both his and hers. Plump's marital post-mortem, Vow, is a frank, intelligent inquiry into the thrills and anguish of infidelity.

When my friend said Bill was having an affair, everything made immediate sense. I did not doubt it. I knew I would feel like hell later on. But right at that moment, clarity, even of something terrible, was an odd but certain kind of rest.

The news did in fact go downhill from there.

At what point in my life did the concept of Finding Out take a continual turn for the worse? It used to be that Finding Out was a kind of gift. It's how you grew up, learned, started to pick your way along the more ragged edges of your experiences. When I was younger, I found out all manner of useful and happy things. I found out that my parents loved me. That my grandfather was a masterful storyteller. That dogs spun around three times before lying down.

I found out that the little box my parents brought home from New York City when I was ten held a kitten. That horses could in fact drink from a hose. That I could boss my little sister around, but just until she grew taller than me. That you could in fact sit in a tree during a thunderstorm and not get struck by lightning.

I found out there was fun to be had with the opposite sex in basements and in laundry rooms. That sex was strange and astonishingly good. That men actually do want to make you happy. I found out that Bill wanted to marry me. That honeymoons were precious. And that no matter how incompetent I felt as a mother, my infant sons preferred me to all others.

Somewhere along the way, though, Finding Out became a massive drag. Maybe this is what it is to be an adult, moving along the arc of your life's luck and misfortune and accumulating its downers. Now we Find Out about cancer, about infidelity, about a child's sickness, about a school shooting, about a neighbor diagnosed with leukemia, about an insurrection that leads to a war that leads to young soldiers dying. These were present when we were younger, but not so searingly. They were not about us. They happened in Scotland or Da Nang or Wisconsin. But as we age, the odds increase that we are standing on ground zero.

I imagine Bill would say the same thing, for he experienced shock and betrayal at my hands, too. How did he Find Out about me for the first time? I told him.

I had three affairs before I had children, early in my marriage— with Tommy, who came into my life through a girlfriend; then with Steven, whom I met on a marina dock in South Carolina; then with Terry, a local hunter who taught me how to practice archery. Each affair knocked into the next, like dominoes, and for a little while took down everything and everyone in the vicinity. Bill was anguished over the discoveries of them. And since they came one on the heels of another, I'm not sure how he slogged through it. He did not ever wish to discuss anything with me in great detail. He recovered without the trickle of dialogue. But he recovered. He stayed in the marriage, is my point.

In time, however, Bill would trump that history. He betrayed me with several women. But while those earlier discoveries were hard to bear, they weren't devastating to our marriage. Each time I found out about him, I wanted our marriage to survive and continue. I learned after each one to live with the realities of his affairs and then just went on. I would not have ended it under the earlier circumstances.

Finally, though, Bill had one of those affairs that shock the whole pond and change all the life forms in it. So that nothing could thrive there afterward. I know this to be true because we had experienced so many scenarios of adultery already. We were a full-horizon couple. We had a 360- degree view of infidelity. We knew it from every angle.

Now that I look back, I can see how much of my life's energy has gone toward infidelity, from both Bill's side and from my own, almost as if I were on a mission. To give in to it, to get past it, to understand it, to force its influence from our marriage. I am dismayed that this is one of the guiding patterns of my life. In the way that the ancient Silk Road is marked out across the planet from space— though you cannot see it from the ground— adultery has carved its own passage through my life, made most visible these days through perspective and distance. It looks like a blast corridor.

Mine is not a strict cautionary tale. It is one tale. Or one version of a tale. There are more versions, more stories, of infidelity out there than there are married people, since you tell the same story many times and change it according to mood and audience, editing for effect, both magnifying and playing down the details. It also reflects the experiences of just two adults, and one of them more than the other. It is a very specific story. I am not an expert in the subject apart from what happened with us. There are millions of different unions, and they all have their own DNA. This is ours, the story of our marriage and all the hopeful and misguided behaviors we brought to it. So while it reflects just one couple's union, it enters the stream of all marriages, weighting the whole institution with its lessons.

I can lay claim to this general truth, though: Of all the things there are to do on the planet, my husband and I picked one hell of a pastime. If we had it to do over again, I imagine the very same things would happen once more. Had we been able to change ourselves early enough to make a lasting difference, we probably would have done that already.