NPR stories about Looking for the Gulf Motel 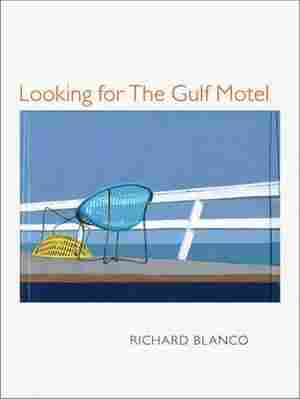 April 25, 2014 • Blanco, who read his poem "One Today" at Obama's second inauguration, is the first immigrant, Latino and openly gay poet chosen to read at an inauguration. 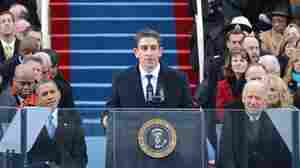 February 18, 2013 • Blanco, who read his poem "One Today" at Obama's second inauguration, is the first immigrant, Latino and openly gay poet chosen to read at an inauguration.

Excerpt: Looking For The Gulf Motel

The Name I Wanted:

Not Ricardo but Richard, because I felt

in tights reciting lines from Othello, because

I wanted to be as handsome as Richard Gere

in a white tuxedo, because I had a pinky ring

because I knew I could be just as wholesome

as Richie Cunningham, just as American

as my father's favorite president, Nixon.

Richard—not Ricardo, not my nicknames:

the color of dry tobacco when I was born,

or El Gallegito—the Little Galician, because

born in Spain, not a hundred percent Cuban.

Not Rico, the name Lupe wrote on my desk

in ruffled sleeves dancing conga at the Copa,

Copa Cabana all of eighth grade. And definitely

Richard—descendant of British royals, not

the shepherds of my mother's family, not

the plantain farmers on my father's side.

Richard—name of German composers, not

the swish of machetes, rapping of bongos.

Richard—more elegant than my grandfather

in his polyester suit, Chiclets in his pocket,

more refined than my grandmother gnawing

defender of my own country, protector

of my wishes, conqueror of mirrors, sovereign

of my imagination—a name for my name.

what the hell, Mark loves his native snow

and I don't mind it, really. I love icicles,

even though I still decorate the house

with seashells and starfish. Sometimes

I want to raise chickens and pigs, wonder

if I could grow even a small mango tree

in my three-season porch. But mostly,

I'm happy with hemlocks and birches

towering over the house, their shadows

even in the summer. Sometimes I miss

the melody of Spanish, a little, and I play

Sometimes I miss the taste of white rice

with picadillo—so I cook, but it's never

as good as my mother's. I don't miss her

or the smell of her Cuban bread as much

as I should. Most days I wonder why, but

dressed in his ski clothes, or I spy him

planting petunias in the spring, his face

smudged with this earth, or barbequing

in the summer when he asks me if I want

a hamberg or a cheezeberg as he calls them—

I understand why the mountains here

are enough, white with snow or green

with palms, mountains are mountains,

but love is thicker than any country.

Looking for The Gulf Motel

The Gulf Motel with mermaid lampposts

and ship's wheel in the lobby should still be

rising out of the sand like a cake decoration.

My brother and I should still be pretending

we don't know our parents, embarrassing us

as they roll the luggage cart past the front desk

loaded with our scruffy suitcases, two-dozen

with enough mangos to last the entire week,

our espresso pot, the pressure cooker—and

a pork roast reeking garlic through the lobby.

All because we can't afford to eat out, not even

on vacation, only two hours from our home

in Miami, but far enough away to be thrilled

by whiter sands on the west coast of Florida,

where I should still be for the first time watching

the sun set instead of rise over the ocean.

My mother should still be in the kitchenette

of The Gulf Motel, her daisy sandals from Kmart

squeaking across the linoleum, still gorgeous

in her teal swimsuit and amber earrings

of onion powder and dollops of tomato sauce.

My father should still be in a terrycloth jacket

in the sunset at The Gulf Motel, watching us

grow into men who will be proud of him.

My brother and I should still be playing Parcheesi,

my father should still be alive, slow dancing

with my mother on the sliding-glass balcony

of The Gulf Motel. No music, only the waves

keeping time, a song only their minds hear

ten-thousand nights back to their life in Cuba.

My mother's face should still be resting against

his bare chest like the moon resting on the sea,

the stars should still be turning around them.

My brother should still be thirteen, sneaking

from sand. I should still be eight years old

dazzled by seashells and how many seconds

I hold my breath underwater—but I'm not.

I am thirty-eight, driving up Collier Boulevard,

looking for The Gulf Motel, for everything

that should still be, but isn't. I want to blame

the condos, their shadows for ruining the beach

and my past, I want to chase the snowbirds away

with their tacky mansions and yachts, I want

to turn the golf courses back into mangroves,

I want to find The Gulf Motel exactly as it was

and pretend for a moment, nothing lost is lost.