This debut novel, inspired by the life and mysterious fate of George Mallory, traces the experiences of his wife, Ruth. In 1924 she maintains a hopeful vigil in war-ravaged England during Mallory's fateful third expedition to reach the summit of Mount Everest.

NPR stories about Above All Things 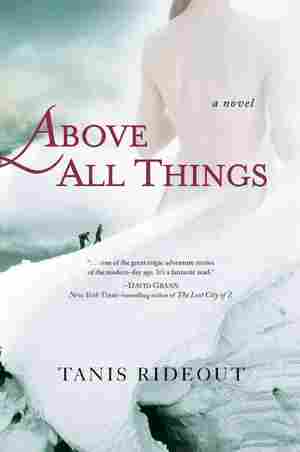 February 15, 2013 • George Mallory, famed mountaineer, perished in his attempt to be the first man to summit Mount Everest. Tanis Rideout's debut novel combines the tale of that famous climb with the lesser-known story of George's wife, Ruth.

Excerpt: Above All Things

Tell me the story of Everest," she said, a fervent smile sweeping across her face, creasing the corners of her eyes. "Tell me about this mountain that's stealing you away from me."

George and Ruth sat on the drawing room floor, laughing and tipsy, dinner growing cold on the table in the next room. Ruth was cross-legged opposite him, her gray skirt pulled tight across her knees. She picked up the single sheet of thick ivory paper from her lap and reread the invitation from the newly formed Mount Everest Committee again. "My husband, the world-famous explorer." Ruth held up her glass of wine and he reached out with his own, the crystal ringing in the lamplit room. She was fairly bursting with happiness.

"I like the sound of that," George said, and let himself imagine what it would be like to have people thinking about him, talking about him. The opportunities that success on Everest would bring. "I might be able to leave teaching, maybe even write full time. We could travel," he said. "Have our own adventures."

Handing him the invitation, Ruth rose unsteadily to her feet and gulped at her wine. He scanned the words again — hope that you'll join the Everest reconnaissance, pursuit of the final Pole, for the honour of King and Country — as she crossed the room to the bookcase. Stretching up on her bare feet, she reached for the atlas on the top shelf before turning to pad back to him. "Show me," she said, sitting back down beside him. Her hair had come loose from where it had been pinned up and haloed her in the dim light. She pushed it off her brow with the back of her hand.

He laid out The Times Atlas of the World on the floor, on the blue Turkish rug with its woven colors of water and sky, ice and snow. When he found the proper map, George took Ruth's hand and with her finger drew a line around Europe, the path of a ship past France, around capes and narrow islands and the ruins of the Greeks. Through the canal that split the desert in two and past the land of Lawrence's Arabs. Their hands described reckless adventure, sailing over longitudes and latitudes, past Here there be monsters and the arched backs of sea serpents painted on the blue of the Indian Ocean, and into the port of Bombay. George drew lines across the plains of India, around bazaars and villages, landscapes of tea and Hindu cows, into the curved spine of the Himalaya with its foothills and plateaus.

"It's blank," Ruth exclaimed when their hands reached the spot where Everest should be; there was only a series of names — no relief, no lines of ridges or elevations. Just words floating in an empty space, waiting to be claimed by him.

"No one has mapped her yet. That's what we're going to do, Ruth — reconnoiter her, bring back the shape of her." He stroked his fingers across the map, as if he could explore the range through the pages, feeling for the relief of peaks. "These are the highest mountains on earth." There was an awe in his voice that he wanted her to share. He recited names and caressed the page before moving from the map to navigate her skin beneath the folds of her skirt. "West to east — imagine them. Cho Uyo, Gyanchungkang, Everest, Makalu, Kangchenjunga." They were like spices on his tongue, on hers, tingling.

In a cloud of lavender soap and cloves for the toothache she had complained of earlier, Ruth pressed against him, promised curries for dinner. "You'll have to write me about everything. Every detail so it will be almost like I am with you." There was a thread unraveling at her collar, marking a line on her pale throat.

He took her hands again and traced the lines of her palms, like horizons. "She was named for George Everest. He was the surveyor general of India, but he died before he ever saw her. From malaria, after blindness, paralysis, and wild bouts of insanity. He was a bully apparently — drove his men mad. He set out to force some order on the world with his maps. He started at the bottom and swept his survey up the whole arc of India."

He whispered words like "trigonometrical" and "triangulation" against her throat, at the pulse below her ear. With the back of his fingers he skimmed the long declension of her throat, traced the line of her collarbone where it slipped beneath her blouse.

"Everest was measured from a horizon away." He traced the curvature of the earth along the concave of her stomach. Pushed her back onto the blue carpet, unearthed her.

"They crept from hill to hill, building towers and measuring the angle of peaks on the horizon. A fraction of a degree could make all the difference." He pressed on top of her, tilted her hips, and pulled her to him.

The atlas ripped under her, the paper stuck to her wet skin.

After a few minutes, Ruth rolled onto her side, curved her body around his, and tucked her head under his chin. She could smell herself on him.

"There were three problems with the measurements. Corrections to be made, all by mathematics. The curvature of the earth, the refraction of the light through the thinner air and colder temperatures. And the weight of the mountain."

The air was cooling now on her naked skin. After a moment, Ruth began to shiver despite still being slick with sweat. She pulled herself up, sat facing him, hugged her knees to her chest. She couldn't believe how happy she felt, how proud, that George had been chosen. The scent of him rose off her skin. "The weight of the mountain?" she asked.

The light was thinning in the room, etching the two of them in dusk- blue lines. George stood, strode to the window, and gazed out toward the towers of Charterhouse while Ruth shrugged into the jacket he had thrown aside. He shut the window tight and came back, kneeled in front of her. He tugged at the lapels of his jacket, drawing it tight around her shoulders.

"It's so massive it affects the gravity around it. They used theodolites to survey her, but the pull of the mountain threw the measurements off. Can you imagine anything so powerful, Ruth? This mountain has a presence. Everest knew it when he planned to measure her — and he didn't even go near her, never even saw her." Closing her eyes, Ruth leaned against his shoulder and pictured the jagged skyline of the mountain.

She imagined his letters arriving from the Himalaya, herself curled up by the fire to read them. She thought about his returning home to her, victorious. Her face split into another smile, her cheeks aching from it. She couldn't help it. The happiness she felt for him swept through her. She tried not to think that being apart only seemed romantic when you were together.

He reached out again and Ruth stretched out her hand to meet his. She would take his hand, pull him to his feet, lead him up the stairs to their bedroom. But he brushed past her to touch the waiting emptiness of the map.

A little while longer, then, she thought. She would wait while he planned for and dreamed about the mountain, the future. "How do they know?" she asked again. "Maybe it isn't even the tallest."