The Soundtrack of My Life

The Soundtrack of My Life

Title
The Soundtrack of My Life
Author
Clive Davis

The Chief Creative Officer of Sony Music presents a candid assessment of his life and the past half-century of popular music from an insider's perspective, tracing the difficulties he faced as an orphaned teen, the controversies that challenged his ambitions and his work with a wide array of stars and personalities.

NPR stories about The Soundtrack of My Life 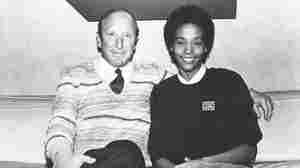 Clive Davis poses with Whitney Houston, then a rising star, shortly after Houston signed a contract with Arista Records in 1983. AP hide caption

Clive Davis: A Life With A 'Soundtrack'

February 22, 2013 • In the new memoir The Soundtrack of My Life, the legendary record producer and industry executive shares stories from his more than four-decade career.

Clive Davis: A Life With A 'Soundtrack'

Excerpt: The Soundtrack of My Life

Welcome to the Party

Perhaps my favorite time of the year is the period at the beginning of February leading up to my pre-Grammy party. For that entire time I'm holed up in the bungalow at the Beverly Hills Hotel that is my second home and, during this time, the Grammy Party War Room. My son Doug, who is a music industry lawyer, is at my side, and we're intermittently surrounded by other family members and party-planning strategists. We have the layout of the ballroom at the Beverly Hilton Hotel on a large easel in front of us, with the names of the guests at the ninety or more tables each appended by magnetic tiles. I move those tiles from table to table as new inspiration strikes and news about cancellations and new RSVPs comes in. Along with the people who have already responded, we have to deal with the hundreds angling for last-minute invitations. It's the hardest thing in the world to say no, but the ballroom is only so big. What I value most about the party is how eclectic the guest list is, so it's not necessarily a question of how important a person is but what he or she can add to the mix. Guests of the artists who are performing for free obviously need to be accommodated to as great a degree as possible, but other than that it's simply a question of creating an unforgettable night. If people see the same folks that they see at every other music event, we've failed.

My first Grammy party took place in 1976 as a way to honor Barry Manilow's nomination for Record of the Year for "Mandy," a milestone for Arista Records, the label I launched in 1974. For years now the party has taken place the evening before the Grammy Awards in Los Angeles, but that year it was a brunch on the day after the event. Th at year I experienced the anxiety that everyone throwing a party goes through:

Is anybody going to come? Happily, when Stevie Wonder walked into the room, I knew that we were onto something. Stevie, an artist whom I've always loved and, unfortunately, only occasionally worked with, would become a regular at the parties, often taking the stage during the finale and seeming as if he would never stop playing to say good night, because he was having such a great time. Back then, I had no idea that the party would grow into the event that it's become. It soon symbolized a celebration of music and the music industry, a night for once-in-a-lifetime performances capable of stirring a crowd that, for the most part, thinks they've seen it all. Watching the likes of Gwen Stefani and Donald Trump leap to their feet as Aretha Franklin, backed by Whitney Houston and Toni Braxton, tears into "Respect" is just one such unforgettable moment. That the event is not televised only makes it more private and personal for the attendees.

Each year I try to seat people at tables where they'll be with people they ordinarily wouldn't meet socially. A couple like Jane Fonda and the producer Richard Perry provides an excellent opportunity to inter-mingle musicians and actors. Someone like Al Gore wouldn't be seated among politicos, but artists and executives who admire his brand of activism. Someone like Paul McCartney might be placed alongside acclaimed young R&B or hip-hop artists. Every celebrity is also a fan, so I look for opportunities for people to meet their heroes, or perhaps to discover new heroes and learn a bit about the history that preceded them. It restores everyone's sense of why they got into show business, and especially music, in the first place. Suddenly they're as wide-eyed as the people waiting outside the hotel for autographs.

The Grammys are almost always in Los Angeles and the timing of the party takes advantage of the fact that, along with the many musi-cians who live there, many artists will be in town for the ceremony. As mentioned, no one gets paid to perform, so we totally rely on the desire of artists to play for their peers. It's important that the show keep moving so, with rare exceptions, every artist is limited to two songs. The opening spot is often reserved for a rock band, like Mumford & Sons recently, because once the show has started, it's harder to change the set and pop artists can more easily take the stage and perform with the house band. And regardless of genre, the musical director, Rickey Minor, ensures a level of quality that no one could match. Between sets, I like to speak to the crowd as if they're in my living room. I relate anecdotes from my own experiences with the performers and introduce various people in the audience, both to pay respect to industry titans like Quincy Jones, Mo Ostin, Berry Gordy, and the late Ahmet Erte-gun, or to let people know that a reclusive superstar like Prince or the legendary Sly Stone is on the scene. I love for younger artists to meet veteran Hall of Famers, who in turn are moved to hear from the new-comers how important an influence they've been.

When I was starting out in the music industry, I was impressed by the shows Bill Graham used to stage at his Fillmore venues in San Francisco and New York. He wasn't afraid to challenge people's tastes and expose them to styles of music they might never have otherwise heard. He went for the highest common denominator, not the lowest. I have tried to do that with the labels I've run, and at the party I ignore all considerations of demographics and genre distinctions. And through the years everyone has loved it! What a treat to see Lou Reed backed up by Slash or dueting with Rod Stewart, or to hear Pink, sitting on a stool at the front of the stage and accompanied only by a guitar, deliver a beautiful and haunting rendition of "Me and Bobby McGee." And sometimes it's just so exciting to see artists rock the hottest song of the moment, as when Busta Rhymes and Puffy Combs lit up the room by opening the show with "Pass the Courvoisier." I never announce the performers in advance of the party so that the audience gets genuinely excited by the introduction of each new act.