Ditch the Lectures, Save Tens of Thousands, and Learn More Than Your Peers Ever Will

Title
Hacking Your Education
Subtitle
Ditch the Lectures, Save Tens of Thousands, and Learn More Than Your Peers Ever Will
Author
Dale J. Stephens

NPR stories about Hacking Your Education 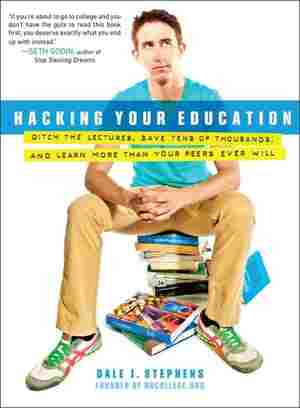 March 5, 2013 • Dale Stephens says many students would be better off ditching college and finding alternate ways to complete their educations. His new book, Hacking Your Education, explores that idea. "When you think about education as an investment, you have to think about what the return is going to be," he says.

I went to college because I assumed I needed a college degree to get a good job. When I realized that wasn't the case, I left. Thinking back on it now, I went to college because I wanted to do the things I believed only college graduates could do. Visions of handsome jobs, alumni networks, and all-night parties filled my teenage mind. What I realized is that the fantasy isn't the college degree. The fantasy is the path to success a college education is supposed to open. It turns out you can skip college entirely and learn more than your peers ever will. We shouldn't be asking, How can I get a college degree? Instead, we should ask, How can I get the things a degree promises? As I see it, there are three main reasons we go to university:

1. For the social experience

3. To learn for learning's sake.

The Social Experience of College

A few days before I left college, I was having dinner in the cafeteria with friends who were asking me questions about leaving school. "Where will you live?" they asked, and "How will you support yourself?" These were serious questions, and I gave serious answers until a voice piped up at the end of the table.

"What about the beer and the girls?" a guy from my English class asked. "Aren't you going to miss them?"

I couldn't help but laugh. Not because drinking and having sex weren't priorities for me — they were and continue to be — but rather because he thought those were activities exclusive to the university. In my case, I figured I'd find more opportunities for both in San Francisco than I would at college in Arkansas. And in my case, I was right — my social life and sex life are far better now than they ever were in college. There are a lot of things that we assume exist only at universities but that in fact exist in the real world too. It's also wrong to assume that the only place to make lifelong friends is in college or the only place to join interest- based communities is in college or the only place to build a professional network is in college.

HACKING YOUR EDUCATION will teach you to think about your social experiences in different ways. Instead of haphazardly stumbling down your dorm hallway, you'll learn how to create intentional communities based on common values. You can do this both by hosting events, like a dinner party, or by organizing social gatherings, say an outing to a bowling club. You can also tap into existing communities using tools like Meetup or local resources.

Going to College to Get a Job

School is the advertising agency which makes you

believe that you need the society as it is.

It's true that going to college for four years might get you a job. But that's hardly a guarantee today. A 2011 article in the New York Times, titled "Many with New College Degrees Find Job Market Humbling," covered graduates who can't find jobs, reporting that 22.4 percent of college grads under twenty-five are unemployed and another 22 per-cent are working jobs that don't require a college degree. The scene is no brighter for those with terminal degrees. In fall 2010, the Chronicle of Higher Education found that there were fifty-seven hundred janitors in the United States with PhDs. I'm sure these are talented people — it's sad to see their brilliance go unused.

When I started writing HACKING YOUR EDUCATION in 2011, the average student graduated $25,000 or so in debt. By 2012, it was up to $27,000 in debt. By the time you read this sentence, it will have increased another couple grand. Please, whatever you do, try not to take on student loans. Here's why:

1. When you graduate college with an average of $27,000 in debt, you're stuck in a narrow track, needing to find a job to pay off the debt. You are mortgaging away your freedom to innovate in exchange for a degree. Sure, there are people who owe much less than that but there are lots of people with lots more debt. It is a fucking terrible idea to start out your life with $27,000 hanging over your head.

2. Student loan debt is unforgivable in the case of bankruptcy. Yes, that's right. You can declare bankruptcy and not pay back your credit cards, and the bank can repossess your house, but you're stuck with loans until you're dead.

However, if you already have student loans, what is done is done. You have to live with reality, and you should start paying them off as quickly as possible. For a great perspective and ideas about how to go to school without going into debt, check out my friend Zac Bissonnette's book Debt-Free U. For inspiration and ideas for how to pay down your student debt, check out Joe Mihalic's blog No More Harvard Debt. He graduated from Harvard Business School with $90,000 in debt, and he paid it all off in seven months. Or, instead of taking on debt, consider going to a university in Finland, where all higher education is free, even for international students.

If you want to be a doctor, medical school is a wise choice — I don't recommend keeping cadavers in your garage. However, for nonlicensed professions, college may no longer be a good investment. Since 1980, college tuition has risen more than 350 percent adjusted for inflation. Yes, the College Board will point out that there is a wage premium for college graduates: Each year of college education leads to an 8 percent increase in overall lifetime earnings. This is true today, but will it be true in the future? In 2010, student loan debt outpaced credit card debt and topped $1 trillion at the end of 2011.

I Love to Learn, Therefore I Go to College

If college were teaching useful skills, 22.4 percent of college grads under age twenty-five wouldn't be unemployed. In their book Academically Adrift, Richard Arum, a sociologist at New York University, and Josipa Roska, a sociologist at the University of Virginia, demonstrated that undergraduate education is losing academic rigor. Thirty-six percent of students showed no improvement in critical thinking, complex reasoning, or writing (as measured by the Collegiate Learning Assessment) over four years of college. According to the labor economists Philip S. Babcock and Mindy S. Marks, the average student spent only about fourteen hours per week studying in 2010 — about half the amount a full-time college student studied in 1960.

If you really wanted to learn, why not join your local library? The books are free, and you could invite your friends over and start an interest-based discussion group. You could even invite someone who is an expert on the subject you're discussing to give a short talk. It would be almost like college, except free and in the real world.

The point is, if you want to learn in college, you're going to have to fight. The odds are against you: The professors are researching, the students are partying, and the administrators are building new state-of-the-art gyms every few months. None of these people has a direct incentive to help you learn. The professors want to publish papers to get tenure. The students want to get a degree in the easiest way possible. The administrators are waiting for your tuition checks. But you have to recall: Universities do not exist to train you for the real world; they exist to make money. If you want to learn the skills required to navigate the world — the hustle, networking, and creativity — you're going to have to hack your own education. This book will teach you how to go deeper than college and learn in a lifelong way.

The systems and institutions that we see around us — of school, college, and work — are being systematically dismantled. We've seen a rise in the popularity of homeschooling and unschooling in the last ten years — from 1.1 million in 2003 to 1.5 million in 2007 in America. The same is true of the breakdown of traditional work — freelancing is becoming more and more prevalent. But no one has told the story of what happens in between, when that sacred institu-tion we call the university ceases to exist.

When I give people advice about their education, I focus on the importance of being a hackademic. When you're a hackademic, you're less interested in someone's résumé and more interested in her passions. You understand that institutions are malleable, and you bend those institutions to shape your own education and career. Most important, as a hackademic you know that you don't need to ask your parents, your teachers, your friends, or society for permission to build your future.