Accessibility links
Sum It Up NPR coverage of Sum It Up: 1,098 Victories, a Couple of Irrelevant Losses, and a Life in Perspective by Pat Summitt and Sally Jenkins. News, author interviews, critics' picks and more.

1,098 Victories, a Couple of Irrelevant Losses, and a Life in Perspective

by Pat Summitt and Sally Jenkins

Title
Sum It Up
Subtitle
1,098 Victories, a Couple of Irrelevant Losses, and a Life in Perspective
Author
Pat Summitt and Sally Jenkins

The former head coach of the Tennessee Vols women's basketball team describes how her upbringing helped her to develop a balanced coaching style and recounts her battle with early-onset Alzheimer's disease.

NPR stories about Sum It Up 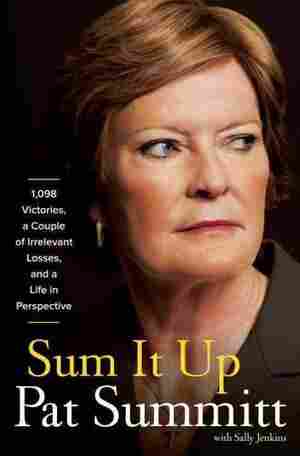 March 5, 2013 • Pat Summitt grew up on a rural farm and went on to a stellar career in basketball. As head coach of the Tennessee Lady Vols, she won more games than any other basketball coach in NCAA history. Her new memoir, Sum It Up, records her memories even as she is losing them to Alzheimer's.

Excerpt: Sum It Up

I made a raw impression at the age of eighteen. I was a frank, elbowy girl wearing a home-stitched skirt and cheap shoes, with a rampant mane of hair that ended in a flip. I arrived at UT-Martin carrying one small "soup case," which is how my sorority sisters claim that I said the word suitcase in my Tennessee hills accent.

The moment I stepped into Clement Hall, the women's dormitory, I felt backward. My only coloring came from fresh air; I'd never worn mascara or blush. All around me were women in bright cosmetics, their hair teased and sprayed. I'd heard that UT-Martin was a destination for rich girls from Memphis and these must be them, I figured. They seemed impossibly moneyed and made-up. There were prim girls in neat-buttoned cardigans, hip ones in bell-bottom trousers with sash belts, daring ones in miniskirts and knee-high boots that showed off their trim legs.

I shrank when I looked down. The hemline sewn by my mother fell below my knee, to midcalf.

Even the way the other girls spoke seemed well-heeled. They talked with gentle lilts and they didn't say "ain't," whereas I said "yonder," and "reckon," and "done went and gone," and I wondered how Daddy would manage back home in the fields all by "hisself " — judging by their manicured nails, they'd never had dirt on their palms.

Back home, "Trisha" could bale hay and drive a tractor, but at Martin she was inferior, and a figure of fun. I sought out Esther Stubblefield, whom I knew from playing against her in high school. Esther had grown up only twenty miles from me, but she was town reared one county over in Springfield, which had a brick courthouse and sidewalks, so I viewed her as the height of sophistication.

Esther greeted me warmly, but as she gave me the once-over, she realized how country and naive I was. She decided to toy with me.

"You should sign up for Russian," she advised me. "It's an easy A."

I had never been away from Henrietta before, except for one overnight trip with the 4-H Club. The Martin campus had fewer than five thousand students and sat in a moderate-sized town halfway between Nashville and Memphis, merely a two-hour drive from home. It was hardly cosmopolitan — but to me it felt as foreign as the other side of the globe, and I was scared to death of it. So scared that the very first weekend, I ran back to the farm. I found a ride to Henrietta and walked through the door of our farmhouse with my laundry under my arm.

My father said, "What are you doing here?"

I told him I just felt like coming back for a visit. But we both knew the truth: I was frightened.

"Look, I don't want you on the road every weekend," he said. "And the next time you come, don't bring your dirty clothes with you."

What he meant was, grow up. When I got a little tearful, he said, "I don't want to hear any more about that." So I went back to campus and set about trying somehow to fit in. Slowly, hesitantly, I tried to meet people. One afternoon, I saw a smartly dressed young woman who lived in Clement Hall struggling to lift a heavy old iron typewriter out of the trunk of her car. Now, here was something I knew how to do. I bounded down the stairs. "Hey, hon, let me help you with that," I said. I took the typewriter from her and hauled it up to her room and was rewarded with a bright lipstick smile and a thank-you.

But mostly I stayed on the margin, dreading any conversation that would betray my lack of social skills. I'd never thought about how I sounded before, but now when I heard myself I decided I'd just as soon not speak. I clamped my mouth firmly shut, and I hardly opened it, stayed so quiet that no one knew my correct name. Everyone just assumed that because I was enrolled as Patricia Sue Head, I went by "Pat," and I didn't have the voice to say that no one ever called me that; my name was "Trisha." But rather than speak up and hear the hick from Cheatham County come out, I let it go. So I became Pat. It sounded stronger, I decided.

I was so modest I even dressed in my dorm room closet. But I watched people — a lot. I studied the girls who tanned themselves on the roof of Clement Hall, lying on aluminum foil. They lathered up with baby oil and iodine, and put Sun-In on their hair, so they would glow at the socials. I mentally cataloged their shoes and their blouses.

Esther Stubblefield rescued me. She was the leader of Martin's basketball team, and she was also a campus social leader, a white-blond streak of energy with a crackling direct honesty, smart mouth, and wicked humor. She was as good-hearted as she was funny, and she felt responsible for helping me adjust to campus life, as both a teammate and an acquaintance from back home. We liked each other instantly, and she took me under her wing. She announced that she wanted to sponsor me for membership with the Chi Omega sorority, the house she belonged to. I looked at her like she was crazy. But Esther insisted. Pledging would help me meet people on campus and force me to get over my shyness, she said. The Chi Os weren't snobs, she assured me; they had a wide-ranging membership, some beauty queens, yes, but also academics and athletes.

So I did it. I put on a white dress, agonized over whether my white shoes were right for the season, and went to a social. Esther stayed by my side and walked me through it promising she would back me for membership. But as it turned out, she didn't have to, because unbeknownst to both of us, I had another sponsor. Esther was ready to make her plea on my behalf at the membership meeting, when the refined-looking young woman whose typewriter I had carried stood up. "I want to say something," she said. And she told the story of my hauling the heavy machine up the stairs.

"I don't know Pat personally," she said. "But I want that girl in my sorority."

So that's how I became a sorority girl — I muscled my way in.

Reprinted from Sum It Up Copyright 2013 by Pat Head Summitt. Written with Sally Jenkins. Published by Crown Archetype, a division of Random House, Inc.