The Puerto Rican singer, dancer, and actress looks back at her life and career, from her arrival in New York at age five to winning an Academy Award for her role in "West Side Story" to her struggles to avoid typecasting. 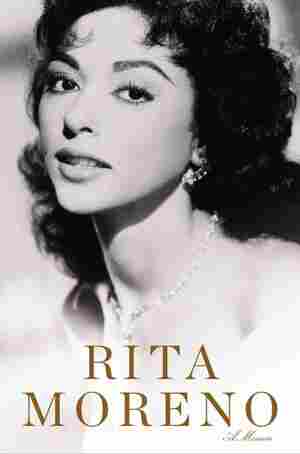 March 7, 2013 • Moreno made her mark in musicals like Singin' in the Rain and The King and I before winning an Oscar for her unforgettable turn as Anita in West Side Story. Her new memoir tells the story of how a girl born in Puerto Rico and raised in Harlem made it all the way to Hollywood.

I don't know what I am saying — I speak only Spanish, just off the boat from San Juan. I am five years old in a hospital ward and I know there is another Spanish kid here, because I can hear him a few beds away from me. The orderlies are yelling at him, and I parrot what they say — "Hey, boy."

Crying and feverish, I learn my first words in English from that boy: "Shut up."

I have always been a quick study. Fast learner. Anything to survive.

Start back there — New York, 1936. I am not yet named Rita Moreno. I am still Rosita. Rosita Dolores Alverio. I am five years old.

When we leave Puerto Rico, it is as if we are caught in a reverse Wizard of Oz scene. We go from brilliant Technicolor to grit-gray, black-and-white. The world that was lush and hot with life, sunshine, bright flowers, birds, and whistling frogs, turns to lifeless cold ash.

After my island, New York City seems a freezing hell. Later, people ask, "Why didn't you and your mother turn back?"

We couldn't afford return passage. Many of us spent all the money we had saved to sail to America to start a new life with new opportunities. Others had hopes to settle, make a fortune, and then later return to the island; meanwhile, they worked in New York to send money back to their families in Puerto Rico.

When you are five years old, what is money? What is "opportunity"? My mother and I arrived in winter, and I thought, This is crazy. What have we done? But my twenty-two-year-old pretty, full-lipped, full-hipped mother had enough of Juncos, Puerto Rico, her unfaithful husband, and her old life, which did not look like paradise to her. My mami, Rosa Maria Marcano Alverio, was looking for a new start, a new husband. She was seeking love and fortune, and she would walk toward it on her homemade sandals and in her hand-sewn dress, carrying her one suitcase and the rest in shopping bags. When you have almost nothing, you can travel light.

My mami was escaping something — at five, I didn't know what she would want to escape. But she did not want to live with Paco, my father, anymore — that much I knew — and I never saw her standing close to him or even alone in a room with him. She was in a hurry to get away from him — and is it my imagination, or do I see his arm reaching out, grabbing her to pull her back to him? And her twisting away and saying something to him, something sharp but scared too, like, "Keep away from me; don't you touch me ... "?

The first thing that happened when I came to America was that I got sick. Terribly sick — burning-up, shaking-cold, itching-like-crazy sick all over my body. What am I doing, five years old, alone, can't speak English in some awful ward in some bad New York hospital? No one can understand what I am saying, except the boy who teaches me the words "shut up."

What is the place? The hospital is named Misericordia, just to tell you right away how miserable it is ...

How'd I get here? I'm dying from terror almost, like the baby bird I once picked up that died in my hand. That little bird gazed up at me and gave me a look — a look I could never forget — and it was like the little bird was so scared, he just stopped breathing; his little eyes glazed. Maybe I am dying of fear too, before the sickness can get me. I don't even know what's wrong with me. Later, I would find out it was chicken pox, a common but, at that time, very serious childhood disease. But in the moment, I thought the same mysterious force that killed the bird was attacking me.

This could not happen in my worst nightmare. Only life can be this terrible. They come for me in the dead of night — masked men who grab me, wrap me in a sheet, tie me in all the way, and do not even let my head stick out. They twist the ends of the body sack, like a Tootsie Roll wrapper. Blind in that sack, I squirm and yell for my mother. And my mother screams and cries, like only a mother can scream, for them to let her go with her baby girl. "Don't take my baby. Let me go with her. Madre de Dios. Mother of God." My mami, Rosa Maria, she is just twenty-two years old. She runs down the five flights of stairs alongside the ambulance attendants; we hit every corner of every banister at every landing. Ouch, ouch, ouch.

"Mama! Mami! Mama!" But no one can go with me. I am crying from inside the sack and invent a desperate ploy: "I feel better. I'm not sick anymore. Let me out," I cry in Spanish.

They don't. Bagged, I am thrown in the back of the ambulance. Did they have to turn on that wailing noise? (I had never heard a siren before.) Oh, Madre de Dios, that makes it so much scarier. My heart is popping out of my chest. Maybe I am dead already, wrapped in the sheet like a corpse in a shroud? Blind in the bag, racing through the screaming city night to who knows where? The men are laughing and joking to each other in a language I don't understand, but you don't need to translate indifference. These guys don't care; so what if they've got a five-year-old girl in a sack crying for her mami? They don't care about me.

How can they not care? Everybody has always cared for me. I am la niña Rosita Dolores; my mami calls me Coookeee, Monkeee, Nonni, and covers me with kisses. My abuelo, Justino, he claps and smiles when I dance. "So pretty, so sweet ... " Everybody loves me, Rosita Dolores ... Only now — here in New York City, in the big America — they don't.