A writer's family life unravels when he begins editing an odd, unpublished biography: His ex-wife embarks on a dangerous geological expedition, his daughter travels on sexually charged trips and the writer himself descends into madness. Translated by Mike Mitchell.

NPR stories about Where Tigers Are at Home 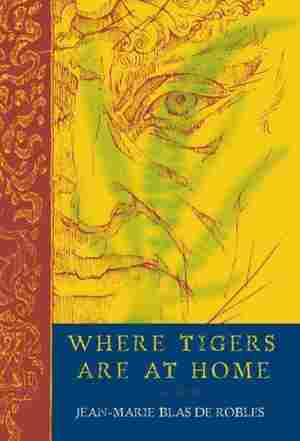 March 20, 2013 • Jean-Marie Blas de Robles' novel Where Tigers Are at Home won France's 2008 Prix Medicis. It's now out in English, and reviewer Alan Cheuse says it will appeal to readers who like the complexity of Umberto Eco, with "an adventure plot straight out of Michael Crichton."

Excerpt: Where Tigers Are At Home

When Paulino and Isaac came to relieve them around one in the morning there were hardly any fish in the basket: three swordfish for Roetgen and two for Joao, plus a hammerhead shark of about thirty pounds. There was still a heavy sea but the wind was slackening.

'The tide's turning,' Joao said to Paulino, 'They should start biting a bit more. Don't forget to take in the anchor cable bit by bit.'

He crawled over to the hatch and held the cover half open and Roetgen slipped inside. 'Go on, there's plenty of room,' he said, seeing Roetgen hesitate. Once he had disappeared, Joao followed him into the hold and pulled down the hatch behind him, taking care not to close it completely. During the few seconds in which he was shrouded in darkness, in that sea-tossed coffin, he had to keep a grip on himself not to go back up on deck.

Joao struck a match and lit a little piece of candle wedged in between two sacks of salt, then wriggled to get in a more comfortable position. 'Puxa!' he muttered, 'What filthy weather!'

Stretched out on their sides, either side of the centre-board case, they were closer to each other than they would ever be up in the open air. Joao's face looked as if it were carved from old wood, each of his wrinkles being a separate curve of the grain. The hold had a strong smell of fish and brine.

'From time to time, when the moon's in the wrong quarter. The problem is that the sharks don't like...'

'Like the others, but there's more meat on them. And then there's a bonus for the liver and the fins.'

'What do they do with them?'

'The liver goes to the laboratories. I don't really know but it seems it's good for medicines, creams... It's the Chinese who buy the fins. They're very partial to them from what people say. Are there some in your part of the world too?'

'Not as many as round here. And they're farther down, well away from the shore.'

'There's hardly any left. They've been overfished. It's the same with all the others, certain species have even disappeared entirely.'

'How is that possible?' Joao cried, suddenly frightened by that prospect.

'I tell you: too much industrial-scale fishing, pollution... it's a real disaster.'

Joao clicked his tongue several times to express his disapproval. 'God, it's not possible, things like that! Is it far away where you come from?'

'How should I know. Where you come from, I mean.'

Joao frowned. 'How many hours by bus would that be?' His serious expression made it clear that he had no idea where France was and couldn't imagine a distance until it was converted into the only yardsticks he was familiar with: days on foot for shorter distances, hours on the bus for longer ones. Caught unprepared, Roetgen gave him a journey time in hours by plane, but the lack of response told him it meant nothing to the fisherman. He therefore made a mental calculation of the distance the jangada could cover in a day and told Joao: two months sailing to the east, provided there was a constant favourable wind during the whole of the voyage.

'Two months!' Joao repeated, visibly impressed this time. He was silent for several minutes, thinking it over, before coming back to the subject: 'Where you live are there jaguars in the mata as well?'

'No, Joao. We have different animals, but it's a bit the same as with the fish, there aren't that many left.'

'Oh, right,' Joao said, disappointed at a land so lacking in the essentials. 'Not even caymans? And mango trees, at least you must have some mango trees?'

We've got high-speed trains, the Airbus and rockets, Joao, computers that can do calculations more quickly than our brains and contain complete encyclopaedias. We have an impressive literary and artistic past, the greatest perfume-makers, dress designers of genius who make such magnificent negligees if you lived three times over you still wouldn't have enough to pay for them. We have nuclear power stations which produce waste which will remain deadly for ten thousand years, perhaps more, we don't really know. Just imagine, Joao, ten thousand years! As if the first Homo sapiens had bequeathed us rubbish bins which were so contaminated they'd still poison everything around them to this day. We also have tremendous bombs, little marvels capable of wiping out your mango trees, your jaguars and your parrots for ever. Capable of putting an end to your race, Joao, to the whole of the human race! But, thank God, we have a very high opinion of ourselves.

Roetgen knew he would never be able to describe to him a reality which only stood out, he suddenly realised with a feeling of bitterness and deprivation, by its arrogance. Called on to justify Western civilisation, and himself with it, he failed to find a single feature likely to interest this man. A man for whom the natural riches of the earth, the warmth of the sun on it, the influence of the moon on this or that animal or plant, still had meaning and value; an intelligent, sensitive person, but living in a world where culture still retained its proper sense, like humus, a piece of land.

Feeling ashamed, humbled before Joao, like a guilty man facing the judge, he invented an environment that could match up to his. Combining the stories of his childhood with some memories of mediaeval history, he told of wolves attacking the villages on winter nights and howled, there in the dark hold, as they were supposed to across the snow in the valleys of the French countryside. Encouraged by the fisherman's continuing attention, he embroidered his story with their shining eyes, their monstrous fangs and even ended up telling the fable of the shepherd boy who cried wolf, at length, as if it were a true story.

'Not exactly,' Roetgen said, fascinated by a view of the world in which geography played such a minor role. 'I'll explain...'

It was no use, however. Neither the map of the world he drew on the floor, nor his attempts to simplify it brought the least sign of understanding on Joao's face. He had never travelled anywhere, apart from the three hours' walk to Aracati to see the jangada owner and, once when he was a child, a pilgrimage to the shrine at Canindé, to thank Saint Francis for having saved his mother from smallpox. Eight hours in a bus, of which his memory was confused but filled with wonder. Unable either to read or write and never having seen a television but for a few moments in the town, his knowledge derived from his own experiences and from the cantadores, who even came as far as the bars of Canoa to sing their laments. He could not imagine that the earth was round either, nor that men had gone to the moon, though he listened to these new facts with perfect politeness. Anything beyond his village, his work or what he had been able to see of Brazil for himself, was enveloped in a hazy mist in which things and places were associated by chance, in the jumble of names that happened to have stuck in his memory: Sao Paulo, New York, Paris... that is, the Otherworld; an world isolated from his concerns, a beyond with no fixed abode, a blurred virtual world which he assumed it was impossible to know.

From Where Tigers Are At Home, by Jean-Marie Blas de Robles, translated by Mike Mitchell. Copyright 2013. Reprinted by permission of Other Press.