Describes the federal government's failure to provide adequate resources for disabled veterans from Iraq and Afghanistan, examining the struggles they face, medical attention that they need, and efforts by families and non-profit groups to help them. 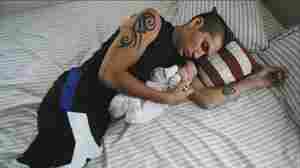 March 18, 2013 • On the 10-year anniversary of the U.S. invasion of Iraq, journalist Aaron Glantz talks about the challenges American service members face in accessing disability and other benefits. Glantz says there is a backlog of 900,000 claims and that the average waiting period is 273 days.

Twenty-seven-year-old Melissa Resta remembers when she ﬁrst met her husband. Growing up near Navy and Air Force bases in rural South Carolina, her father had always told her not to date cops or guys in the military.

Then Patrick Resta appeared at her door. "He showed up in full Army fatigues after going to drill," she recalled laughing. "It was a little awkward. I have to say that I giggled every time he put the beret on, but it was him that I loved."

Patrick had always loved the military. He'd signed up right after high school, but by the time he married Melissa he'd already ﬁnished his time on active duty and was in the Army Reserve. "I ﬁgured he's only in the Reserves so I'm not going to become an Army wife or any­thing," she told me, "but that deﬁnitely happened."

Patrick's aunt and uncle were killed in the World Trade Center on September 11, 2001, and about three weeks later Patrick was called to active duty as part of homeland security. A year later, the Bush ad­ministration started to advocate attacking Iraq. Patrick told me he "had questions from the start about some of the things that were being given as a rationale for the war," but considered it his patriotic duty to answer the call to service.

In the spring of 2004, the Army sent Patrick to Diyala Province, northeast of Baghdad near the Iranian border. One of the most dan­gerous places in Iraq, it's where al-Qaeda in Iraq leader Abu Musab al-Zarqawi was killed in 2006.

Patrick served as a combat medic. He went out on patrol and checked for roadside bombs. He says he saw Humvees blow up in his face, but added the worst casualties he saw were Iraqi civilians—who he was often forbidden to treat.

"We could not treat Iraqi civilians unless they were about to die and we had done it," he said, noting the medic's primary (and nearly al­ways exclusive) responsibility is to care for injured American soldiers. "When I would walk through these cities I had people bringing their children up to me who were ill and had to be treated, and we were threatened with being court-martialed if we took any medicine to treat these Iraqis in the city."

Patrick's experiences are hardly unique. In July 2004, a team of re­searchers from Walter Reed Medical Center published a report in the New England Journal of Medicine on the mental health of American troops before and after deployment. Ninety-ﬁve percent of those sur­veyed reported seeing dead bodies and remains, 95 percent had been shot at, and 89 percent had been ambushed or attacked. Another 69 percent had seen an injured woman or child and felt they could not provide assistance.

On November 13, 2004, two days before he left Iraq, Patrick posed for a photograph that for him has come to symbolize his wartime de­ployment. "I went on my last patrol to the city where I was based," he told me. "I was walking through a market. I wanted to take a photo

there because seeing the children probably had the most effect on me. So I handed the camera to a friend of mine."

Patrick said he didn't look at what the children were doing while the picture was being taken. He was too busy looking around, check­ing windows and rooftops to make sure no one was planning an attack.

When his friend handed the camera back after snapping the photo, Patrick saw something about the children he hadn't noticed. "One of them had his right arm extended in a kind of Hitler salute, and on the other side of me one of the children is holding up a local newspaper with the Abu Ghraib torture pictures on the front cover," he said. "That was the impression that I left Iraq with—that we've angered a lot of people and radicalized a whole generation of Iraqis to hate this country and hate Americans."

When Patrick returned home November 15, 2004, his wife Melissa quickly realized something was wrong. "That's when it was really bad," she said. "He was angry all the time and was drinking more than what I think someone normally should and at off hours. He wasn't sleeping. When I would lay down he wasn't there."

At ﬁrst, Melissa blamed circumstances for Patrick's anger and mood swings. While Patrick was in Iraq, Melissa graduated. Eager for work, the couple decided to move from South Carolina to Philadelphia, where they crammed into a family member's small apartment. Time passed and the anger contin­ued. Melissa began to worry.

"Why do I have to do this?" Patrick would shout. "Why don't you have a job? Why haven't you done this? Why won't you go away?"

Six weeks later, at Christmas time, Melissa confronted her hus­band. "He just wasn't interested in even spending any time with me," she said. "Christmas morning he got up and went off with his brother and I didn't even see him the rest of the day, I knew there was some­thing wrong there. So I ﬁnally said something. I asked him if he wanted to split up and he said he didn't care and then I realized some­thing's not right. He wouldn't say this to me."

So Melissa talked to other veterans in her community, and a few months later a Vietnam War veteran helped Patrick get an appoint­ment at the Department of Veterans Affairs, where he was diagnosed with post-traumatic stress disorder, an anxiety disease that can emerge after exposure to a terrifying event or ordeal in which grave physical harm occurred or was threatened. A person experiencing PTSD may lose touch with reality and believe that the traumatic incident is hap­pening all over again. By January 2008, over 120,000 Iraq and Afghan­istan war veterans had been diagnosed with a psychological illness by the VA's mental health services.

Studies show that between 15 and 50 percent of all post-9/11 vet­erans (between 320,000 and 800,000 people) suffer from PTSD. "It becomes a disorder when it causes dysfunction," explained Capt. Thomas Grieger, a doctor at the National Naval Medical Center in Bethesda, Maryland, and one of the military's leading researchers on traumatic stress, "to the extent that individuals change their activity patterns signiﬁcantly or it changes their relationships with their fam­ily, or their employers, coworkers, or friends. ... I've seen several soldiers and sailors who came back from combat, had serious symp­s– toms, chose not to report them and continued to have severe o– symptoms through another deployment. Oftentimes, individuals try

to manage it on their own, and regrettably it comes down to the use of alcohol."

Indeed, because many soldiers either don't realize their problems are linked to PTSD or don't want to admit to having a psychiatric ill­ness, family members are often best positioned to point vets toward help.

"I'd be concerned if they weren't sleeping well," Dr. Grieger told me. "I'd be concerned if they'd given up activities that they pre­viously enjoyed. Sometimes they call out in their sleep and wake up during nightmares. Often they have difficulty driving or ﬂying or being in other kinds of conﬁned spaces. Drinking too much over a long period of time would also be a red ﬂag." Also of concern, Grieger said, would be if veterans were unwilling to talk about their war ex­periences or showed discomfort at reminders of war, like civilian air­craft or Hummers.

Even veterans who go in for therapy or psychoactive medication never fully recover. VA doctors can help patients manage their symp­toms, but there's no cure for PTSD. After two years of therapy, Patrick Resta told me he's still "not the person I was before" experiencing combat in Iraq. "I was always laid back and relaxed, always cracking jokes and things like that," he said. "Now I'm anxious and tense. I have bouts of anger and pretty severe insomnia, some bad nightmares. It's pretty standard for the men and women who are over there. All the people I've talked to have pretty much the same symptoms."

Still, the group therapy sessions Patrick attends at the VA have been helpful. He's gone back to school and is working on an associates de­gree at a community college in Philadelphia. After that, he plans to transfer to Temple University to study nursing.