A Slap in the Face

A Slap in the Face

Why Insults Hurt - and Why They Shouldn't

by William B. Irvine

Title
A Slap in the Face
Subtitle
Why Insults Hurt - and Why They Shouldn't
Author
William B. Irvine

Insults are part of the fabric of daily life. But why do we insult each other? Why do insults cause us such pain? Most importantly, how can we overcome our inclination to insult others? William Irvine undertakes a wide-ranging investigation of insults, their history, the role they play in social relationships, and the science behind them.

NPR stories about A Slap in the Face 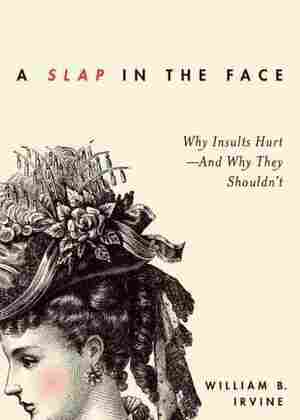 You're So Dumb, You Probably Think This Book Is About Getting Slapped

March 26, 2013 • "Your mother was a hamster, and your father smelt of elderberries!" Philosophy professor William Irvine's new book, A Slap in the Face, is a compendium of insults — and a scholarly look at why we're constantly compelled to one-up each other.

You're So Dumb, You Probably Think This Book Is About Getting Slapped

Excerpt: A Slap In The Face

In the 1920s, a group of writers, editors, critics, and actors were in the habit of meeting for lunch at the Algonquin Hotel in New York City. They sat at a round table in the hotel's restaurant and, preferably over martinis, swapped witticisms. Playwright Marc Connelly was a member of the Algonquin Round Table, as the group was known. One day he was sitting at lunch when another man came up behind him, rubbed his hands over Connelly's bald head, and said, "Marc, your head feels as smooth as my wife's ass." Connelly reached up, felt his own scalp, and without missing a beat replied, "So it does, so it does." This is a delightful example of repartee: an insulted person quickly turns the insult back on the insulter. This bit of repartee was sufficiently witty that we are still repeating it eight decades later.

In other cases, the consequences of an insult, rather than being humorous, are horrific. In 1996, for example, Ronald Shanabarger's girlfriend refused to cut short a cruise to come comfort him when his father died. He felt sufficiently insulted by this refusal that he apparently hatched a cold-blooded plan for revenge. He married the girlfriend, had a child by her, and allowed sufficient time for her to bond with the child—all so he could kill the child: he suffocated it with plastic wrap. Doing this, he thought, would make the woman understand how he felt when his father died and thereby make her appreciate the gravity of her failure to comfort him at that time.

Notice that in this case, what Shanabarger took to be insulting wasn't something his girlfriend said and wasn't even something she did; it was something she failed to do—namely, cut her cruise short. Notice, too, that the girlfriend might not have intended to hurt Shanabarger's feelings; to the contrary, she might simply have been thoughtless. We should not make the mistake, then, of thinking that only intentionally hurtful remarks can count as insults. Rather, if you find my behavior to be insulting, I have insulted you, perhaps without intending to do so.

Insults are ubiquitous. It may be uncommon for a boss or teacher to insult us by calling us a fool in public, but insults from friends and relatives are commonplace. They might tell us that the glare from our bald head is ruining the group photo they are trying to take. Or they might tell those present, as we are paying for their dinner, that such generosity on our part is astonishing and suggest that we must be experiencing the early symptoms of food poisoning. Curiously, friends and relatives say these things not because they want to offend us but because they like us and want us to like them in turn. Indeed, if we take offense at what they say, they will be surprised. "We were just teasing you," they will explain.

Another form of insult is simultaneously more subtle and sinister than this. Suppose I tell you that a mutual friend has told me that you are a pompous fool. The friend has clearly insulted you, albeit behind your back. But besides this insult, there might be a second and arguably more malicious insult. Consider, after all, my motives in telling you about the friend's comment. It could be that I did so for your own good: I wanted to let you know that you should not trust this "friend." It is also possible, though, that my motives in reporting the insult are anything but benevolent: I might have wanted to inflict the pain of an insult on you without myself being the author of that insult and therefore without laying myself open to retaliation on your part. Indeed, if I dislike you, hearing someone insult you behind your back is cause for celebration, inasmuch as it presents me with the insult-equivalent of a free lunch.

An examination of insults gives us valuable insight into the human condition. We are people who need to be among people. The problem is that once we are among them, we feel compelled to sort ourselves into social hierarchies. If we were wolves, we might accomplish this with a series of fights: whoever defeated all comers would be the leader of the pack, and whoever was defeated by all would be the last to eat—if any food was left. But we are not wolves; we are instead creatures who have evolved oversized brains, and we have used these
brains to develop language. As a result, we don't need to use our teeth or fists to sort ourselves into social hierarchies. We can instead use words, strung together to form insults. And so we do.

Turning our attention to the historical record, we find that as long as humans have possessed written language, we have used it to insult each other. Thus, in the Old Testament, we find individuals complaining to God about having been insulted: "I am a worm, not a man, abused by all men, scorned by the people. All who see me jeer at me, make mouths at me and wag their heads." We find advice on what to do when insulted: "A clever man slighted conceals his feelings." We find people insulting the Lord: "Remember, O Lord, the taunts of
the enemy, the scorn a savage nation pours on thy name." And we find Jeremiah reporting what the Lord told him regarding Israel: "Do you see what apostate Israel did? She went up to every hill-top and under every spreading tree, and there she played the whore." That an omnipotent and perfectly good being would feel the need to insult mere mortals says something about how tempting it is to use words to inflict pain.