Three Central Bankers and a World on Fire

In May 2010, the world's most powerful central bankers met in Basel, Switzerland: the European Central Bank's Jean-Claude Trichet, the Bank of England's Mervyn King and the Federal Reserve's Ben Bernanke. The Washington Post's Neil Irwin explores the role this meeting played in safeguarding the global economy.

NPR stories about The Alchemists 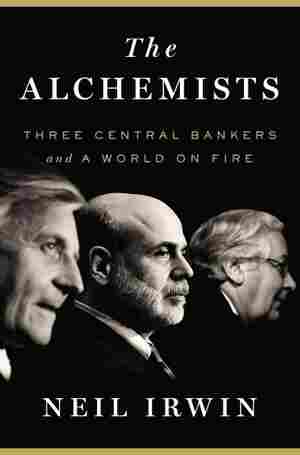 April 8, 2013 • In a new book, Washington Post economics writer Neil Irwin looks at an elite group of policymakers from around the world who manage the money supply, and explains how money can come from — and disappear into — thin air based on the decisions of these influential men and women.

On August 9, 2007, Jean-Claude Trichet awoke at his childhood home of Saint-Malo, on the coast of Brittany, ready for a day puttering about in his motorboat and enjoying the company of his grandchildren. It was time for his summer respite after a busy year as president of the European Central Bank. Mervyn King, the governor of the Bank of England, had also planned a leisurely Thursday: He would make his way from his flat in London's Notting Hill neighborhood to the Kennington Oval, on the city's south side, to watch the British national cricket team play India. Ben Bernanke, the chairman of the U.S. Federal Reserve, was alone among the three men who would guide the world through the convulsions of the half decade to come in having scheduled a regular workday. His security detail was to drive him from his Capitol Hill row house to the Treasury Department, where he had an early breakfast with Secretary Henry Paulson. Bernanke would eat oatmeal. For the three men, the day would not go quite as planned.

At about 7:30 a.m., Trichet's phone rang. Francesco Papadia, the head of the ECB's markets desk, was on the line from the central bank's headquarters in Frankfurt. "We have a problem," Papadia said. Gigantic French bank BNP Paribas had announced that it was suspending withdrawals from three investment funds it managed. The funds were invested heavily in U.S. home-mortgage-backed securities that had become nearly impossible to value. Customers' money would be locked up until the bank could figure out exactly how much the investments were worth. In itself, it was a tiny development: The three relatively obscure funds held only €1.6 billion in assets.

But the announcement confirmed the worst fears of bankers across Europe. They'd been worried for weeks about the losses they were facing on U.S. home loans. Supposedly ultrasecure mortgage bonds that had traded freely earlier in 2007 had by late July hardly been trading at all. As more and more people who'd taken out risky loans to buy a house in Tampa or Cleveland or Phoenix found themselves unable to pay them back, all the assumptions on which those loans had been made started to be called into question. Maybe all those AAA-rated securities weren't really AAA after all. Had the banks poured vast sums into bonds that weren't worth what they'd seemed to be? And if BNP Paribas couldn't figure out how much its own funds were worth, how could any other bank know its real exposure to mortgage-backed securities?

It's not for nothing that the word "credit" derives from the Latin creditus, "trusted." Banks use highly rated securities as almost the equivalent of cash— whenever they need more dollars or euros, they hand the bonds over to another bank as collateral. It's one of the basic ways they ensure they have exactly the amount of money they need to meet their obligations on any given day. But when it came to those mortgage-backed securities in early August 2007, that simple exchange suddenly became complicated. The problem wasn't just that the securities were worth less than they'd been before—after all, banks can deal with losses. It's that no one knew just how much less—and whether, if one bank had lent money to another down the street in exchange for mortgage-backed securities, it would ever get paid back.

Papadia and his staff spoke regularly with treasurers at twenty major European banks known as the money market contact group, and its members had been warning for days that, as one ECB official put it, an "infarction" was imminent. That Thursday morning, it hit: After the BNP Paribas announcement, with each bank out only for itself, the usual supply of cash was fast evaporating.

"Trust was shaken today," Deutsche Bank chief European economist Thomas Mayer told the New York Times. As one executive of a major global bank said later, "It was something none of us had experienced. It was as if your entire life you had turned the spigot and water came out. And now there was no water."

It's a more precise metaphor than it may seem, for liquidity is exactly what was disappearing in the banking system that day. No longer were euros, dollars, and pounds as easy to come by as water. History has taught again and again that when banks shut down and hoard their money, so too do the economies they serve. A banker who's unwilling to lend to other bankers is likely also to be unwilling to lend to the businesses and households that need money to build a factory or buy a house. If unchecked, the banking crisis in Europe could inflict untold damage on the world economy. Suddenly, the European habit of taking a lengthy late summer vacation had become very inconvenient.

Gather the Executive Board, Trichet instructed Papadia. He needed to talk to the six officials from across Europe who share the collective authority to deploy the resources of the central bank—including the ability to create euros from thin air. ECB staff in Frankfurt began calling around to various villas and retreats in Spain, Italy, and Greece to arrange an emergency conference call. Trichet normally used the walled medieval port town of Saint-Malo as a retreat from the world, a place where he could enjoy the water and read poetry and philosophy. But now it would become the nerve center from which he would manage the first phase of the first great financial crisis of the twenty-first century.

By 10 a.m., the full Executive Board was on the line. Trichet was emphatic: "There is only one thing we can do, which is to give liquidity." The ECB, he insisted, must flood the banking system with euros. He was proposing that the central bank fulfill its traditional role as "lender of last resort," stepping in when private banks were pulling back, and using a novel means to do so. The ECB would abandon its usual practice of pumping some fixed amount of money into the banking system and instead make an unlimited number of euros available to the banks that needed them. The technical term for what Trichet and the Executive Board did at 12:30 p.m. central European time is to offer a "fixed-rate tender with full allotment."

Translation: Come and get it, guys. We'll give you as many euros as you need at 4 percent. Some forty-nine banks took €95 billion.