Superman is more than a character — he's a cultural phenomenon, as demonstrated in this exploration of his 75 years of adventure, reinvention and influence.

75 Years Of Superman: The Man Of Steel's 'Unauthorized' Bio

April 24, 2013 • Since the debut of Superman in Action Comics in 1938, fans have been thrilled by the adventures of the Man of Steel. In his book Superman: The Unauthorized Biography, comic book geek Glen Weldon explores the evolution of the superhero in comics, radio and small and large screen.

75 Years Of Superman: The Man Of Steel's 'Unauthorized' Bio 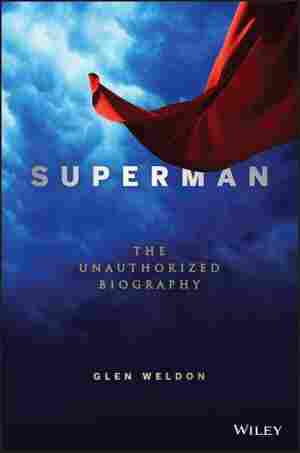 April 18, 2013 • NPR comics critic Glen Weldon has a new, comprehensive biography of the classic American hero: Superman. Reviewer Elizabeth Graham says Weldon's survey of the Man of Steel's many lives in Superman: The Unauthorized Biography is "reliable, witty and informative."

When you think about it, Lex Luthor's got a point: everything comes easy to Superman. That, in fact, is pretty much his whole shtick: entitled superiority.

We plod along the ground, he soars overheard. To ward off the ravages of age, we grunt with weights and sweat on treadmills; he tosses SUVs around like cardboard and will never lose his perfect eight-pack. We are plain, soft, unkempt things; he is impossibly handsome and lantern-jawed, with only a single S-shaped spit curl descending from his hairline like the tail of a lemur. (To readers of his very first adventures, back in the heyday of Brylcreem, an out-of-place lock of hair on a character's head must have signaled derring-do: "Here, then, is a man of action! Look! See how his coiffure cannot be contained by puny Earth pomade!")

And it's not like the guy invented himself, as Batman did, or came by his powers in a freak accident, as Spider-Man did. No, his amazing abilities are simply his birthright, coded into his genes like that weird blue-black hair of his.

Superman is every handsome, athletic, trust-fund kid who roars his convertible into the high school parking lot as the sweater around his neck flutters in the breeze. Why has a schmuck like that endured for seventy-five years?

This book sets out to find the answer to that question. Or rather, the answers. Because, of course, there are many, some more inherently worthy of exploration than others. Superman's status as a corporate-owned, heavily licensed nugget of intellectual property into which millions of marketing dollars have been sunk, for example, may be the most important reason he's still around, but it's the least interesting. Because after seventy-five years, Superman has become more than a function of cross-platform synergy and optimized revenue streams.

He endures because he long ago transcended the various media that deliver him to us; he has entered our planet's collective consciousness. This means that each of us holds, in our minds and hearts, our own unique idea of Superman. The precise idiomatic fuel mixture varies: to many, he's simply George Reeves; to others, he's Christopher Reeve or Bud Collyer or that humorless stiff who used to lecture Wendy and Marvin about our precious natural resources on old episodes of Super Friends. To someone like me, who grew up devouring Superman comics and posing all of my action figures in classic Superman flying pose (even, heretically, nonflyers like Batman and Spider-Man), Superman is pretty much how Curt Swan (his definitive artist in comics of the sixties and seventies) used to draw him: kind, caring, and wondrously, endearingly square.

As this book details, Superman's perceived status as a static fixture of popular culture, an unchanging icon of spandex-clad heroism, is an illusion. Examining the Man of Steel during the course of his seventy-five years reveals that everything about him exists in a state of perpetual flux. The particulars of his origin and his power-set have vacillated wildly. So, too, has his persona continually evolved: in his first few years of life, he was our hot-headed, protective big brother; he spent the forties and fifties assuming the role of our coolly distant father; he morphed in the sixties and seventies into our bemused, out-of-touch uncle; and he even became — mercifully briefly, in the benighted nineties — our mulleted, hillbilly cousin.

His rogues' gallery changed, as well. For the first few years of his life, Superman was the ballistic missile brought to the knife fight, as writer Jerry Siegel simply let his grinning Man of Steel hopelessly outmatch petty thugs, goons and yeggs. When that inevitably began to pall, Superman started facing off with pesky tricksters and mad scientists armed with deadly gadgets. Later, when the radio show introduced a mysterious substance that could actually kill the Man of Steel, the stakes rose considerably. Since then, the threats to his existence — and to the world and, in point of fact, to the cosmos itself — have only escalated exponentially.

Even the thing that is most immediately recognizable about the guy — his costume — isn 't immune to change. Hell, in 2011, he even lost the red underpants, if you can imagine.

Yet to nonfans, Superman exists primarily as a memory of childhood, and we tend to think of the things we loved at a young age as frozen in amber, preserved exactly as they were when we last spared them a thought. This is one reason that his publisher's decision to temporarily kill off the Man of Steel in 1992 — conceived as little more than a publicity stunt — touched off a surprising wave of collective nostalgia and reflexive outrage: it felt, to the many who actually thought DC would keep him dead, like a curiously personal attack on something good, innocent, and fondly (if dimly) remembered.

Superman changes as our culture changes. The only thing about him, in fact, that has remained untouched, inviolate, since Action Comics #1 hit the stands in April 1938 is his motivation. That motivation is at once the simplest of them all and the hardest to unpack: he is a hero. Specifically:

1. He puts the needs of others over those of himself.

These are his two most essential attributes, the elements that make a Superman story a Superman story. As we will see, even when all of the other, more recognizable pieces of Super-iconography are in place — the costume, the powers, the spit curl, and so on — if one or both of those two bedrock elements are missing, our mind rebels; we instinctively reject it. It's just not Superman.

The Man of Steel remains the most recognizable figure of the superhero genre, and the superhero genre continues to dominate the comics marketplace (and, lately, the box office as well). Yet this is an uncertain time. As more and more artists and writers look to tell a wider variety of stories, the comics medium is incrementally diversifying. This, combined with the rise of digital distribution, when comics fly through the ether to alight on iPads and smartphones, means that the monthly superhero comic book as we know it today is not long for this world. Meanwhile, film critics and audiences are showing increasingly advanced symptoms of spandex fatigue.

As we will see, though, Superman is bigger than the comics that birthed him, bigger even than the films and the television series that have infused him throughout our culture. He will endure in some form for another seventy-five years and another, because, unlike Spider-Man and Batman, he is not the hero with whom we identify; he is the hero in whom we believe. He is the first, the purest, the ideal. As long as character traits such as selflessness and perseverance manage to retain any cultural currency whatsoever, we will need a Superman to show us what they look like.