A Skeptic Pilgrim Walks the Way of Saint James

David Downie chronicles the pilgrimmage he took with his wife from Paris to the Pyrenees and ultimately to the sanctuary of Saint James, a journey on which they followed age-old trails through France rather than the commercialized Spanish route.

NPR stories about Paris to the Pyrenees 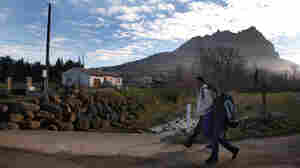 Tourists visit Bugarath, a small village in the foothills of the French Pyrenees, on Dec. 20, 2012. Patrick Aventurier/Getty Images hide caption

April 10, 2013 • Motivated not by God, but by nearly everything else, American author David Downie traveled hundreds of miles on foot across France. He writes about his trek in his new book, Paris to the Pyrenees.

Excerpt: Paris To The Pyrenees

We sealed our bargain in the shadow of the Tour Saint-Jacques, the flamboyant Gothic tower on the rue de Rivoli half a mile from where my wife Alison and I live in central Paris. The tower is all that remains of the celebrated medieval church and hostelry of Saint James the Greater from which pilgrims in their thousands for over a thousand years began walking south following the main European branch of The Way of Saint James — "The Way," for short — from Paris to the Pyrenees. That was where we were headed.

A few days before Easter, we strapped on our pedometers, booted up, and marched south from the tower through crowds of commuters and tourists. Crossing the Île de la Cité, we stopped for a moment of quiet reflection at Notre-Dame cathedral. Then we headed down rue Saint-Jacques, poking our heads into churches, former pilgrims' hostels, and the Paris residence of the abbots of Cluny — now Paris's museum of the Middle Ages where the enigmatic Lady and the Unicorn tapestries hang.

The French call The Way of Saint James le Chemin de Saint Jacques de Compostelle while the Spanish call it El Camino de San- tiago de Compostela. Either way, this pilgrims' highway was built on top of an ancient Roman road that linked northern Europe via Paris to the heartland of Gaul and then continued south to Spain.

Straight and true like most Roman roads, today's rue Saint- Jacques still mounts past the Pantheon, then follows the edge of the Reservoir de la Vanne to the sprawling Cité Universitaire campus. It changes names four times. Beyond the university greenbelt on the pot-holed rue Henri-Vincent, my talking pedometer informed us we had walked 3.26 miles and burned 234 calories. Soon after this, we reached the point where The Way of Saint James dead-ends. It's no longer Paris's glorious roadway to Spain, but rather an off-ramp from the Boulevard Périphérique beltway, a six-lane moat isolating Paris.

As we pondered the snarled cement colossus, it seemed unlikely many pilgrims would flock to the Tour Saint-Jacques again. Questers no longer set out from Paris, we realized, a city of 12 mil- lion ringed by industry, housing projects, expressways, freeways, and railways that are lethal to even the fleetest of foot. Today's pilgrims nod at the Saint-Jacques tower and visit Notre-Dame for a symbolic bend of the knee. They then board buses or trains to other points along "The Way" — smaller, more welcoming locales such as Chartres, Tours, and Poitiers, or Arles, Le Puy-en-Velay, and Vézelay. After a sleepless night of anxious excitement, that's exactly what we did, hopping on the first train to Vézelay the very next morning at dawn.

Across le Morvan from Vézelay to Autun

"Here before me now is my picture, my map, of a place and therefore of myself . . . much of its reality is based on my own shadows, my inventions."

pilgrim . . . from Latin peregrinus, a wanderer, a traveler in foreign parts, a foreigner . .

The storied medieval pilgrimage site of Vézelay stretched length- wise across a hogback Burgundian ridge like a patient on a psychiatrist's couch. At the head of the hill was the Romanesque repository of Mary Magdalene's relics. Our hotel stood near the former fairgrounds at the saint's feet. The simile seemed imperfect. I had heard much about the site's purported psycho-therapeutic powers, though no psychiatrist's couch I've seen is ringed by tall, crumbling walls, studded with belfries and surrounded by Pinot Noir vineyards and cow-flecked pastures.

As a seriously overweight freethinker with wrecked knees, a crazed individual proposing to walk 750 miles on pilgrimage routes, perhaps my vision of Vezélay was impaired by a skeptical outlook, and I was the one who needed a therapist.

A natty innkeeper and a sculpted wooden effigy of Saint James greeted us at the Hôtel du Lion d'Or. She wore a tailored winter- weight pants suit. Saint Jacques wore his signature upturned floppy hat. It looked startlingly like the khaki-colored cotton sunhat the unrepentant optimist Alison had bought at a sports emporium in Paris. A ski cap would've been more appropriate.

I hated to disappoint James or the solicitous hotel manager, but Compostela by whatever name wasn't our goal. The Spanish section of the trail—from Roncesvalles Abbey in the Pyrenees Mountains to Santiago—is mobbed by hundreds of thousands of pilgrims each year. Their main preoccupation is to find food and a place to sleep each night, as we'd seen with our own eyes. Our goal was different. We wanted to cross France, not Spain, following age-old hiking trails, and do so unmolested by cars and other pilgrims, making the pilgrimage our own maverick way.

The truth is we weren't really religious pilgrims. At least I wasn't, and I could only speak for myself. Outwardly, the irrepressible desire I felt to hike across France had little to do with spirituality, a profitable concept whose meaning has never been clear to me. After twenty years of living and working in France, I simply felt the need to make my own mental map of the country by walking across it step by measured step and thereby possess it physically, intimately, something I'd failed to do through a car's windshield. I also needed to reinvent myself from the bottom up, restore something I'd lost, discover things I'd never tried to find, make an inner as well as an outer journey, and ask the big questions again, the What's-it-all-about-Alfie ones I'd stopped asking once out of adolescence. Among those fundamentals was, did I want to stay alive, or did I prefer to explode like an over-inflated balloon?