A Natural History of Transformation

Michael Pollan explores the previously uncharted territory of his own kitchen. There, he discovers the enduring power of the four classical elements — fire, water, air and earth — to transform the stuff of nature into delicious things to eat and drink. 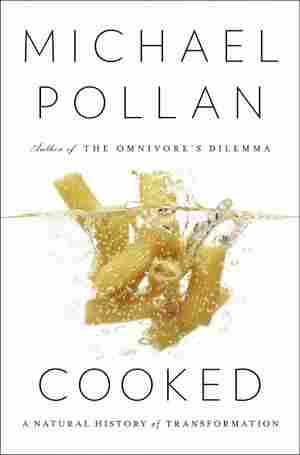 April 21, 2013 • In his latest book, the author of The Omnivore's Dilemma and In Defense of Food turns his attention to how we use the four classical elements to transform plants and animals into food, and argues that home cooking can remake the American food system.

At a certain point in the late middle of my life I made the unexpected but happy discovery that the answer to several of the questions that most occupied me was in fact one and the same.

Some of these questions were personal. For example, what was the single most important thing we could do as a family to improve our health and general well-being? And then what would be a good way to better connect to my teenage son? (As it turned out, this involved not only ordinary cooking but also the specialized form of it known as brewing.) Other questions were slightly more political in nature. For years I had been trying to determine (because I am often asked) what is the most important thing an ordinary person can do to help reform the American food system, to make it healthier and more sustainable? Another related question is, how can people living in a highly specialized consumer economy reduce their sense of dependence and achieve a greater degree of self-sufficiency? And then there were the more philosophical questions, the ones I've been chewing on since I first started writing books. How, in our everyday lives, can we acquire a deeper understanding of the natural world and our species' peculiar role in it? You can always go to the woods to confront such questions, but I discovered that even more interesting answers could be had simply by going to the kitchen.

I would not, as I said, ever have expected it. Cooking has always been a part of my life, but more like the furniture than an object of scrutiny, much less a passion. I counted myself lucky to have a parent—my mother—who loved to cook and almost every night made us a delicious meal. By the time I had a place of my own, I could find my way around a kitchen well enough, the result of nothing more purposeful than all those hours spent hanging around the kitchen while my mother fixed dinner. And though once I had my own place I cooked whenever I had the time, I seldom made time for cooking or gave it much consideration. My kitchen skills, such as they were, were pretty much frozen in place by the time I turned thirty. Truth be told, my most successful dishes leaned heavily on the cooking of others, as when I drizzled my incredible sage-butter sauce over store-bought ravioli. Every now and then I'd look at a cookbook or clip a recipe from the newspaper to add a new dish to my tiny repertoire, or I'd buy a new kitchen gadget, though most of these eventually ended up in a closet.

In retrospect, the mildness of my interest in cooking surprises me, since my interest in every other link of the food chain had been so keen. I've been a gardener since I was eight, growing mostly vegetables, and I've always enjoyed being on farms and writing about agriculture. I've also written a fair amount about the opposite end of the food chain—the eating end, I mean, and the implications of our eating for our health. But to the middle links of the food chain, where the stuff of nature gets transformed into the things we eat and drink, I hadn't really given much thought.

Until, that is, I began trying to unpack a curious paradox I had noticed while watching television, which was simply this: How is it that at the precise historical moment when Americans were abandoning the kitchen, handing over the preparation of most of our meals to the food industry, we began spending so much of our time thinking about food and watching other people cook it on television? The less cooking we were doing in our own lives, it seemed, the more that food and its vicarious preparation fascinated us.

Our culture seems to be of at least two minds on this subject. Survey research confirms we're cooking less and buying more prepared meals every year. The amount of time spent preparing meals in American households has fallen by half since the mid-sixties, when I was watching my mom fix dinner, to a scant twenty-seven minutes a day. (Americans spend less time cooking than people in any other nation, but the general downward trend is global.) And yet at the same time we're talking about cooking more—and watching cooking, and reading about cooking, and going to restaurants designed so that we can watch the work performed live. We live in an age when professional cooks are household names, some of them as famous as athletes or movie stars. The very same activity that many people regard as a form of drudgery has somehow been elevated to a popular spectator sport. When you consider that twenty-seven minutes is less time than it takes to watch a single episode of Top Chef or The Next Food Network Star, you realize that there are now millions of people who spend more time watching food being cooked on television than they spend actually cooking it themselves. I don't need to point out that the food you watch being cooked on television is not food you get to eat.

This is peculiar. After all, we're not watching shows or reading books about sewing or darning socks or changing the oil in our car, three other domestic chores that we have been only too happy to outsource—and then promptly drop from conscious awareness. But cooking somehow feels different. The work, or the process, retains an emotional or psychological power we can't quite shake, or don't want to. And in fact it was after a long bout of watching cooking programs on television that I began to wonder if this activity I had always taken for granted might be worth taking a little more seriously.

I developed a few theories to explain what I came to think of as the Cooking Paradox. The first and most obvious is that watching other people cook is not exactly a new behavior for us humans. Even when "everyone" still cooked, there were plenty of us who mainly watched: men for the most part, and children. Most of us have happy memories of watching our mothers in the kitchen, performing feats that sometimes looked very much like sorcery and typically resulted in something tasty to eat. In ancient Greece, the word for "cook," "butcher," and "priest" was the same—mageiros—and the word shares an etymological root with "magic." I would watch, rapt, when my mother conjured her most magical dishes, like the tightly wrapped packages of fried chicken Kiev that, when cut open with a sharp knife, liberated a pool of melted butter and an aromatic gust of herbs. But watching an everyday pan of eggs get scrambled was nearly as riveting a spectacle, as the slimy yellow goop suddenly leapt into the form of savory gold nuggets. Even the most ordinary dish follows a satisfying arc of transformation, magically becoming something more than the sum of its ordinary parts. And in almost every dish, you can find, besides the culinary ingredients, the ingredients of a story: a beginning, a middle, and an end.