The first woman to represent Texas in the United States Senate introduces some of the extraordinary women who have shaped the state of Texas and the nation, including Clara Driscoll, who fought to save and preserve The Alamo. 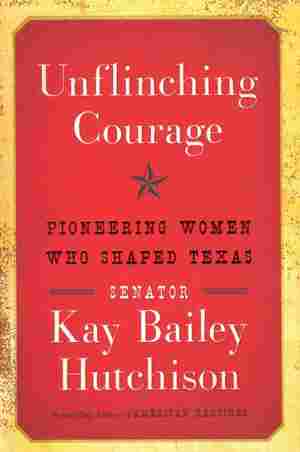 April 18, 2013 • Kay Bailey Hutchison was the first woman to represent Texas in the U.S. Senate. Her new book, Unflinching Courage, profiles some of the brave female pioneers who shaped her home state.

The Spirit of Texas has been cussed and discussed throughout its storied history. Texans are ruggedly independent, fiercely loyal, colorful, fun-loving, and entrepreneurial.

There could be a thousand different reasons given for the unique Texas persona, but I believe it boils down to two major features of our history. First, Texas, alone among the states, fought single-handedly for its independence. Like the Americans who rebelled against oppressive British rule, Texans rose up against the Mexican dictator Santa Anna. The building of a new republic in 1836 marked the beginning of an independent streak that has been passed through the generations. What began as a republic led to statehood in 1845.

The second way our ancestors evinced their Texas spirit was by conquering the harsh land. As the famous Texas historian T. R. Fehrenbach noted, "the Anglo frontier in Texas was not a frontier of traders, trappers and soldiers, as in most other states. It was a frontier of farming families, with women and small children, encroaching and colliding with a long-ranging, barbaric, war-making race." Though Indian wars were common in other states, in Texas they lasted for more than forty years, and the torture doled out by Comanche tribes in particular spared no one. In their attempts to run the settlers out of their hunting and grazing lands, the Indians not only attacked the men, they also made examples of the women, the children, and the elderly.

The nineteenth century put its stamp on the Texas mystique. The early half was dominated by the revolution and the second half by the settling of the unforgiving land.

Contributions by women to the building of the state were crucial to the resulting spirit. To call those pioneer women rugged and resilient would be an understatement. Many of them came from southern states and genteel backgrounds. They were educated and had grown up in comfortable surroundings. They entered an untamed frontier with virtually no comforts or amenities. They followed their husbands, who sought to make their own way mostly because of the cheap or free land. They lived in crude log cabins or even mud huts, had little furniture, and made the most of their utensils, clothes, and necessities. They were threatened by weather, revolution, and Indian raids, and a few even endured arduous trail drives, herding cattle to markets thousands of miles away.

But they stuck it out. They showed resilience and unflinching courage. These women were full partners, often giving birth to ten or twelve children, many of whom died young in a region where doctors were scarce. They used their educations in art, literature, and music to create a society from this rugged existence. Their positive attitude lent a lively character to the new Texas. It was common for the families to meet for "balls," where guests would bring food, amateur musicians would play, and all would dance the night away.