Accessibility links
Return of a King NPR coverage of Return of a King: The Battle for Afghanistan, 1839-42 by William Dalrymple. News, author interviews, critics' picks and more.

Title
Return of a King
Subtitle
The Battle for Afghanistan, 1839-42
Author
William Dalrymple

The author of City of Djinns examines the mid-19th-century Afghan war as a tragic result of neocolonial ambition, cultural collision and hubris, exploring such topics as the reestablishment of a puppet-leader Shah, the conflict's brutal human toll and the similarities between the war and present-day challenges.

NPR stories about Return of a King 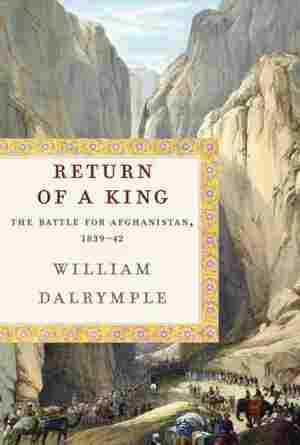 April 25, 2013 • In 1839, Great Britain and Russia were playing the world map like a chessboard — and for no reason other than geography, Afghanistan got caught in the middle. In Return of a King, historian William Dalrymple tells the story of Britain's calamitous invasion.

Excerpt: Return Of A King

The year 1809 opened auspiciously for Shah Shuja ul-Mulk. It was now March, the very beginning of that brief Afghan spring, and the pulse was slowly returning to the veins of the icy landscape long clotted with drifts of waist-high snow. Now the small, sweet-smelling Istalif irises were pushing their way through the frozen ground, the frosted rime on the trunks of the deodars was running to snowmelt, and the Ghilzai nomads were unlatching their fat-tailed sheep from the winter pens, breaking down their goat-hair tents and readying the flocks for the first of the spring migrations to the new grass of the high pastures. It was just then, at that moment of thaw and sap, that Shah Shuja received two pieces of good news—something of a rarity in his troubled reign.

The first concerned the recovery of some lost family property. The largest diamond in the world, the Koh-i-Nur, or Mountain of Light, had been missing for more than a decade, but such was the turbulence of the times that no attempt had been made to find it.

Shah Zaman, Shuja's elder brother and predecessor on the throne of Afghanistan, was said to have hidden the gem shortly before being captured and blinded by his enemies. A huge Indian ruby known as the Fakhraj, the family's other most precious gem, had also disappeared at the same time.

So Shah Shuja summoned his blind brother and questioned him on the whereabouts of their father's most famous jewels: was it really true that he knew where they were hidden? Shah Zaman revealed that nine years earlier he had hidden the Fakhraj under a rock in a stream near the Khyber Pass, shortly before being taken prisoner. Later, he had slipped the Koh-i-Nur into a crack in the wall of the fortress cell where he was first seized and bound. A court historian later recorded, "Shah Shuja immediately dispatched a few of his most trustworthy men to find these two gems and advised them that they should leave no stone unturned in their efforts. They found the Koh-i-Nur with a Shinwari sheikh who in his ignorance was using it as a paperweight for his official papers. As for the Fakhraj, they found it with a Talib, a student, who had uncovered it when he went to a stream to wash his clothes. They impounded both gems and brought them back in the king's service."

The second piece of news, about the arrival of an embassy from a previously hostile neighbour, was potentially of more practical use to the Shah. At the age of only twenty-four, Shuja was now in the seventh year of his reign. By temperament a reader and a thinker, more interested in poetry and scholarship than in warfare or campaigning, it was his fate to have inherited, while still an adolescent, the far-flung Durrani Empire. That empire, founded by his grandfather Ahmad Shah Abdali, had been built out of the collapse of three other Asian empires: the Uzbeks to the north, the Mughals to the south and to the west the Safavids of Persia. It had originally extended from Nishapur in modern Iran through Afghanistan, Baluchistan, the Punjab and Sindh to Kashmir and the threshold of Mughal Delhi. But now, only thirty years after his grandfather's death, the Durrani Empire was itself already well on its way to disintegration.

There was, in fact, nothing very surprising about this. Considering its very ancient history, Afghanistan—or Khurasan, as the Afghans have called the lands of this region for the two last -millennia—had had but a few hours of political or administrative unity. Far more often it had been "the places in between"—the fractured and disputed stretch of mountains, floodplains and deserts separating its more orderly neighbours. At other times its provinces formed the warring extremities of rival, clashing empires. Only very rarely did its parts happen to come together to attain any sort of coherent state in its own right.

Everything had always conspired against its rise: the geography and topography and especially the great stony skeleton of the Hindu Kush, the black rubble of its scalloped and riven slopes standing out against the ice-etched, snow-topped ranges which divided up the country like the bones of a massive rocky ribcage.

Then there were the different tribal, ethnic and linguistic fissures fragmenting Afghan society: the rivalry between the Tajiks, Uzbeks, Hazaras and the Durrani and Ghilzai Pashtuns; the schism between Sunni and Shia; the endemic factionalism within clans and tribes, and especially the blood feuds within closely related lineages. These blood feuds rolled malevolently down from generation to generation, symbols of the impotence of state-run systems of justice. In many places blood feuds became almost a national pastime—the Afghan equivalent of county cricket in the English shires—and the killings they engendered were often on a spectacular scale. Under the guise of reconciliation, one of Shah Shuja's chiefs invited some sixty of his feuding cousins "to dine with him," wrote one observer, "having previously laid bags of gunpowder under the apartment. During the meal, having gone out on some pretext, he blew them all up." A country like this could be governed only with skill, strategy and a full treasure chest.

So when at the beginning of 1809 messengers arrived from the Punjab bearing news of an East India Company Embassy heading north from Delhi seeking an urgent alliance with him, Shah Shuja had good reason to be pleased. In the past the Company had been a major problem for the Durranis, for its well-disciplined sepoy armies had made impossible the lucrative raids down onto the plains of Hindustan which for centuries had been a principal source of Afghan income. Now it seemed that the Company wished to woo the Afghans; the Shah's newswriters wrote to him that the Embassy had already crossed the Indus, en route to his winter capital of Peshawar. This not only offered some respite from the usual round of sieges, arrests and punitive expeditions, it potentially provided Shuja with a powerful ally—something he badly needed. There had never been a British Embassy to Afghanistan before, and the two peoples were almost unknown to each other, so the Embassy had the additional benefit of novelty. "We appointed servants of the royal court known for their refinement and good manners to go to meet them," wrote Shah Shuja in his memoirs, "and ordered them to take charge of hospitality, and to treat them judiciously, with caution and politeness."