Accessibility links
Sketches of Iran NPR coverage of Sketches of Iran: A Glimpse from the Front Lines of Human Rights by Omid Memarian. News, author interviews, critics' picks and more.

A Glimpse from the Front Lines of Human Rights

Editor Omid Memarian pairs political cartoons with essays for an unvarnished view of life inside Iran.

NPR stories about Sketches of Iran 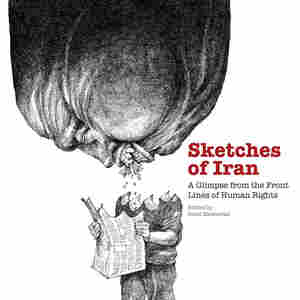 April 28, 2013 • Political cartoons have a long history in Iran and give voice to critics of the authoritarian regime. Lately cartoonists have been increasingly persecuted for their work. A recent book, Sketches of Iran, pairs 40 political essays with cartoons depicting life in Iran today.

Hamlet, in one of the most celebrated passages of the play named after him, praises actors as "abstract and brief chronicles of the time/After your death you were better have a bad epitaph than their ill report while you live." Had the melancholy Dane lived in our troubled times, he could have easily augmented his aphorism by suggesting that cartoonists, no less than actors, are the brief and bold chronicles of the age. With beguilingly simple lines, cartoonists tear asunder the fog of ideological delusion and the illusions of the propagandists' pomp.

The essay, they say, is a child of modernity. It affords an individual an opportunity to offer her or his succinct vision on a topic. And a cartoon is an aesthetic, sometimes abstract, rendition of an essay. It offers the artist's searing vision of an issue — an image bereft of the deluding detritus of unnecessary words or lines.

Ideas about the power of art and the necessity of democracy, and predictions about the inevitable fall of despots, even if they seem to have the iconic permanence of statutes, know no boundaries. They belong to no nation or religion. Like a germinating tree they grow, and the sheer power and dignity they afford every individual, regardless of race and gender, religion and ethnicity, is contagious. Despots see conspiracy where humans experience the fulfilling promise of self-assertive citizenship. Lincoln and his ideas about emancipation are as relevant to today's fight for Muslim dignity as they were to the struggle for the dignity of African-Americans one hundred fifty years ago.

The abstraction of a great cartoon is itself part of its democratic vision and consequence. It requires, invites, and encourages the active participation of the viewer to afford the simple lines meaning and import. The more the artist forces the art's "meaning" on the recipient, the less respectful the art is of the democratic responsibility and rights of citizens. And once docile subjects — whether passive readers of a text or a cartoon, or obedient servants of a dictator's dictates — become active citizens, once they take into their own hands the responsibility for their lives, and for the meaning of art, then the age of despots, of every hue, comes to an end. It matters little whether the despotism is of slavery in America, of religion in Iran, or of a military-intelligence complex in Syria.

All despots seem formidable and irremovable, till they fall, and artists and cartoonists play a critical role in expediting the process. Ever since Iran's Constitutional Revolution of 1905-1907, political cartoonists have played an indispensible role in Iran's century-long, still unfinished battle for democracy. Contemporary cartoonists like Ardeshir Mohasess, no less than the often-unknown cartoonists of political satire magazines Tofigh from the 1920s to the 1970s and Asghar Agha from the 1980s to today, are indeed the "abstract and brief chronicles of the time." They are fitting epitaphs for despots and refreshing reports about the inevitable dawn of democracy.