In a small-town North Carolina amusement park in 1973, college student Devin Jones comes to work as a carny and confronts the legacy of a vicious murder, the fate of a dying child, and the ways both will change his life forever. 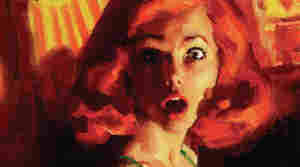 May 28, 2013 • "The more carny it got, the better I liked it," King says of his new thriller, Joyland. The book, set in a North Carolina amusement park in 1973, is part horror novel and part supernatural thriller. King talks with Fresh Air's Terry Gross about his career writing horror, and about what scares him now.

When I reached the palm-reading concession, Madame Fortuna planted herself in my path. Except that's not quite right, because she was only Fortuna between May fifteenth and Labor Day. During those sixteen weeks, she dressed in long skirts, gauzy, layered blouses, and shawls decorated with various cabalistic symbols. Gold hoops hung from her ears, so heavy they dragged the lobes down, and she talked in a thick Romany accent that made her sound like a character from a 1930s fright-flick, the kind featuring mist-shrouded castles and howling wolves.

During the rest of the year she was a widow from Brooklyn who collected Hummel figures and liked movies (especially the weepy-ass kind where some chick gets cancer and dies beautifully). Today she was smartly put together in a black pantsuit and low heels. A rose-pink scarf around her throat added a touch of color. As Fortuna, she sported masses of wild gray locks, but that was a wig, and still stored under its own glass dome in her little Heaven's Bay house. Her actual hair was a cropped cap of dyed black. The Love Story fan from Brooklyn and Fortuna the Seer only came together in one respect: both fancied themselves psychic.

"There is a shadow over you, young man," she announced.

I looked down and saw she was absolutely right. I was standing in the shadow of the Carolina Spin. We both were.

"Not that, stupidnik. Over your future. You will have a hunger."

I had a bad one already, but a Pup-A-Licious footlong would soon take care of it. "That's very interesting, Mrs ... um ... "

"Rosalind Gold," she said, holding out her hand. "But you can call me Rozzie. Everyone does. But during the season ... " She fell into character, which meant she sounded like Bela Lugosi with breasts. "Doorink the season, I am ... Fortuna!"

I shook with her. If she'd been in costume as well as in character, half a dozen gold bangles would have clattered on her wrist. "Very nice to meet you." And, trying on the same accent: "I am ... Devin!"

She wasn't amused. "An Irish name?"

"The Irish are full of sorrow, and many have the sight. I don't know if you do, but you will meet someone who does."

Actually, I was full of happiness ... along with that surpassing desire to put a Pup-A-Licious pup, preferably loaded with chili,

down my throat. This was feeling like an adventure. I told myself I'd probably feel less that way when I was swabbing out toilets at the end of a busy day, or cleaning puke from the seats of the Whirly Cups, but just then everything seemed perfect.

"Are you practicing your act?"

She drew herself up to her full height, which might have been five-two. "Is no act, my lad." She said ect for act. "Jews are the most psychically sensitive race on earth. This is a thing everyone knows." She dropped the accent. "Also, Joyland beats hanging out a palmistry shingle on Second Avenue. Sorrowful or not, I like you. You give off good vibrations."

"One of my very favorite Beach Boys songs."

"But you are on the edge of great sorrow." She paused, doing the old emphasis thing. "And, perhaps, danger."

"No," Rozzie said, and what came next stopped me dead. "She is in your past."

I walked around her in the direction of Pup-A-Licious, being careful not to touch her. She was a charlatan, I didn't have a single doubt about that, but touching her just then still seemed like a lousy idea.

No good. She walked with me. "In your future is a little girl and a little boy. The boy has a dog."

She ignored this latest attempt at levity. "The girl wears a red hat and carries a doll. One of these children has the sight. I don't know which. It is hidden from me."

I hardly heard that part of her spiel. I was thinking of the previous pronouncement, made in a flat Brooklyn accent: She is in your past.

Madame Fortuna got a lot of stuff wrong, I found out, but she did seem to have a genuine psychic touch, and on the day I interviewed for a summer at Joyland, she was hitting on all cylinders.