Coming of Age in an Inner-City Funeral Home

A darkly comic coming-of-age memoir of the author's teen experiences in an urban Baltimore funeral home describes how a beloved relative's death prompted a summer job that turned into a nine-year immersion in a business marked by regional gang violence, AIDS and other intimate tragedies.

NPR stories about Nine Years Under 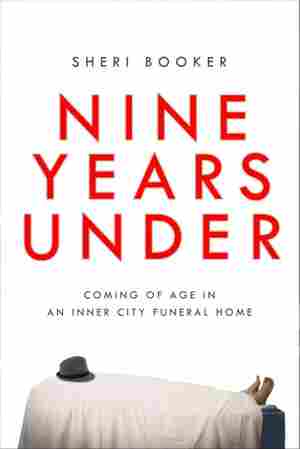 June 1, 2013 • A summer job in a Baltimore funeral home turned into a nine-year career and lifelong passion for Sheri Booker. Her coming-of-age memoir recalls tears and trade secrets of the mortuary business.

The custodian who controlled the thermostat for Baltimore's summer heat was a smug son of a bitch — relentlessly unleashing lethal doses of sweltering humidity and dampness into the inner-city air. There was no way to dilute the blazing mixture.

Fired up like an open rotisserie, it roasted the skins of innocent bystanders — gravediggers, policemen, and outdoor merchants — until they were a golden-brown delight. Those who could tolerate the unbearable heat were desperate for any sort of hydration — a fire hydrant, a frosted bottle of water from a street vendor — or for God to at least have enough mercy on the city to let it rain.

I had stopped petitioning the heavens for miracles four days before, when my aunt Mary's light went dark. My mother discovered her slumped figure just in time to see it gasping for its last taste of oxygen. We were now en route to see her remains for the first time since she was taken from me, and in just a few moments, I would be standing inside a building designed to transition corpses from lifeless organisms into living memories.

None of us should have been surprised, but eight wide eyes stared at Great-Great-Aunt Mary's unresponsive body that horrible night. My parents, my sister, and I hovered around the bed where she lay slouched in an eternal slumber, her eyes shut tight and her body completely still. My father knew CPR; he was a policeman. And my sister had been certified in CPR for the camp where she worked that summer. But no one moved. As I stood there, the plush carpet shifted like sand beneath my bare toes and the walls of the room felt like they were closing in on me.

My home had felt foreign for weeks. The hospice nurse stacked the shelves with medical equipment, a few weeks' supply of Depend adult diapers, morphine patches, bandages, and gauze. People were in and out all the time: nurses, visitors, and ministers back-to-back. If Aunt Mary had been in her right mind, she would have called it "signifying or meddling in her business," but she hadn't been coherent for a while.

We watched her shrivel and shrink as the cancer consumed most of her body. The hospice nurse warned me to savor every moment because time was running out. She gave me a purple double-pocketed folder with booklets about preparing for death and what to do when your loved one has a terminal illness, but I shoved it into a drawer after her shift was over and didn't look at it until weeks after the funeral when we were cleaning out Aunt Mary's room. Neither flowery folders with colorful brochures nor compassionate nurses can prepare you for the inevitable.

After weeks of hospice care and enough meds to tranquilize an army, Aunt Mary slipped through our fingers like twenty thousand dollars on a gambler's bad day. No little girl wants to stand by and witness her hero surrender. I wish someone had told me back then that hospice care was the beginning of the end. Then I wouldn't have blamed myself for not doing enough. I wouldn't have felt ignored by God.