Accessibility links
What Soldiers Do NPR coverage of What Soldiers Do: Sex and the American GI in World War II France by Mary Louise Roberts. News, author interviews, critics' picks and more.

Sex and the American GI in World War II France

NPR stories about What Soldiers Do 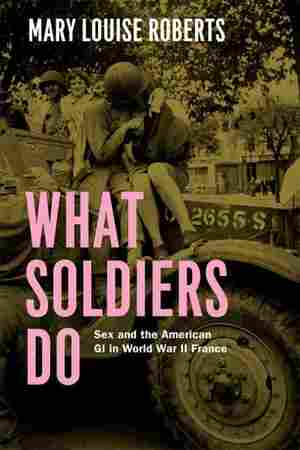 May 31, 2013 • Historian Mary Louise Roberts' new book explores the interactions between soldiers and French women after the U.S. liberated France. She found that American soldiers horrified some towns by having sex with prostitutes in public places, and 1944 saw a wave of rape accusations against GIs.

Excerpt: What Soldiers Do

In the wee hours of 6 June 1944, Angele Levrault, a sixty-year-old schoolmistress from Sainte-Mere-Eglise, awoke with a start. She rose from her bed and exited the back door to use her outhouse. She heard odd fluttering sounds. What she found in her backyard was stranger still: a man with a face streaked in war paint had landed in her garden and was trying to cut himself free from a parachute. Madame Levrault stood frozen in her nightgown. The man's eyes met hers. He raised his finger to his lips, signaling her to be silent, and then slipped away into the night. Although she did not know it at the time, Madame Levrault had just met Private Robert M. Murphy of the Eighty-Second Airborne Division, one of the first Americans to land in France on D-day. A few hours after their encounter in the garden, thousands of Murphy's countrymen would take their first step onto French land at Omaha and Utah Beach. Thousands of others would take their last step on that sand, if they took a step at all. Before the end of that day, 2,499 Americans would perish on the beaches of Normandy. They would reach the shores of France but die before they met even a single French person. Still others, of course, survived the beaches and fought their way across the north of France. Those soldiers are the subject of this book.

For good reason, the Normandy landings have become a sacred event in the American imagination. Historians, politicians, and filmmakers have celebrated the campaign as a great moment in the history of the Second World War. There is no doubt they are right. But the story, at least as it has been told by American historians, suffers by focusing too narrowly on military strategy. As the new military history has demonstrated, wars cannot be separated from the values and preoccupations of those peoples fighting them. It is also crucial, then, to widen our analytic lens in order to consider the encounter between the American soldier and the French civilian. That relationship began at dawn on the sixth of June in places like Angele Levrault's garden; it ended in Le Havre some two years later when the last GI got on a boat home.

A transatlantic approach alters our view of the American experience in Europe. By focusing on encounters between GIs and civilians, we can appreciate the full extent of the soldiers' precarious position in the ETO (European theater of operations). Not only were they warriors fighting for their lives, but also strangers in a strange land. An incident recounted by infantryman John Baxter evokes this sense of alienation. One morning, Baxter's unit drove by convoy through a small village. A French peasant stood and watched them pass through. "We stopped briefly at an intersection and one of our Arkansas soldiers, a man named Mathis, leaned out of the truck and addressed the old man. 'Hey, Mister!,' he barked, 'How far are we from Okalona, Arkansas?' It broke up the convoy." Mathis's joke rested not only on the French man's ignorance of Okalona but also on the idea of the GI as a tourist. It presented the American soldier as a lost traveler trying to find his way home. Unlike tourists to France, the Allies did not expect a warm greeting on Omaha Beach. A good thing, too, as the Germans decidedly did not give them one. But like travelers, they were deposited in an alien landscape, forced to navigate unknown streets, witness unfamiliar customs, and converse with people in a language they did not understand.

The full complexity of the American mission in Europe emerges only when we see the campaign in this way: as an encounter between two allies as well as two enemies. While France was a battlefield, it was also an unknown place, and as such, experienced by GIs in terms not unlike those of a tourist. Such cultural encounters have been overlooked by military historians reluctant to take their eyes off the battlefield. But for millions of GIs, the discovery that a very different world indeed lay beyond the Jersey shore — or San Francisco Bay, for that matter — was central to their war experience. For the GIs, the recognition of cultural difference was unavoidable, astonishing, and often life changing. "From the moment we hit the beaches," wrote infantryman Aramais Hovsepian to his brothers, "you could tell it was a different country. The air even smelled different!" "England was a little like home but France is really a foreign country," recorded Jan Giles in his diary. GI Orval Faubus titled his memoir of France A Faraway Land. With the awareness of difference came the excitement of being in a strange, distant place. Minutes after Charles E. Frohman's company arrived in Normandy, someone pointed out a French street sign. "Everything else was forgotten in a series of awed Oh's and Ah's," remembered Frohman, who was from Columbus, Ohio. "It was the first distinctly French thing we had ever seen. It looked like something out of a fairy tale book. It just didn't look real." Like many visitors to France, the GIs peered over maps, babbled in high school French, wondered why the second floor was called the first floor, and stared in utter bewilderment at bidets.

The recognition of cultural difference, with its lessons of tolerance and humility, became a legacy of the war for a generation of American men, and thus merits closer historical attention. Thinking about the GI as a tourist can also help to explain the arrogance he often felt toward the French. As soldiers, the Americans bore weapons and wielded enormous power. But as tourists, they were dependent on civilians for local knowledge of geography, language, and customs. In this way, they tacked back and forth between authority and dependence, command and vulnerability. Like many tourists, the GIs dealt with their helplessness by making large (and largely unfounded) generalizations about the French. When in their discomfort Americans succumbed to this reflex to categorize, they made sex the defining element of French civilization.