Accessibility links
The Call of Everest NPR coverage of The Call of Everest: The History, Science, and Future of the World's Tallest Peak by Conrad Anker and Thomas Hornbein. News, author interviews, critics' picks and more.

The Call of Everest

The Call of Everest

The History, Science, and Future of the World's Tallest Peak

by Conrad Anker and Thomas Hornbein

Title
The Call of Everest
Subtitle
The History, Science, and Future of the World's Tallest Peak
Author
Conrad Anker and Thomas Hornbein

Presents a historical survey of the world's tallest mountain, featuring accounts of famous climbs and tragedies, previously unpublished photographs, and scientific findings on the impact of climate change.

NPR stories about The Call of Everest 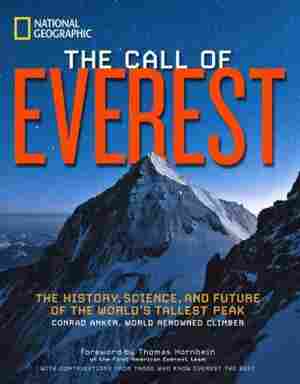 June 2, 2013 • Perhaps no active climber is more closely associated with Mount Everest these days than Conrad Anker, who's also made the preservation of the world's highest mountain one of his priorities. If you've been to Mt. Everest, join our Sunday Conversation and tell us about your experience.

Excerpt: The Call Of Everest 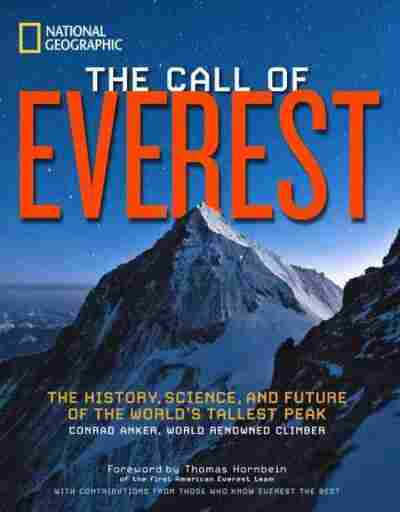 Chapter 1: The Meaning of Everest

On May 26, 2012, I look down from the summit of Mount Everest to three glaciers that have sculpted the mountain. For the past nine and a half hours I have been climbing the Southeast Ridge in near-perfect weather. At an elevation of 8,850 meters, there is no higher place on our planet. The world literally drops away below. To the east, the robust Kangshung Glacier pushes moraine into Tibet and in the process creates small glacial lakes. To the north, the Rongbuk Glacier is solid in appearance, yet I know that it is moving, ever so slowly. To the south and west, the Khumbu Glacier, cascading down the southern flank of the Himalaya, provides sustenance to the people of Nepal and India. The frozen snow on which I stand may eventually join the Ganges, slowly making its way to the Bay of Bengal and the Indian Ocean. Perhaps this water will be recycled and deposited once again in the Himalaya to begin the timeless cycle of regeneration.

Standing on the apex of our planet is humbling. I'm starved of oxygen, depleted of reserves, unable to eat, and bound by anxiety. This is a dangerous place. Yet the symbolism of standing on top of the world gives me a chance to experience time on a cosmic scale. During the half hour I spend on the summit, I reflect on the mountain — how it came to be, its significance to humanity, and my personal connection to Everest. For the third time I have the opportunity to stand at this unique spot on the planet.

Humans frame time within the span of our own existence and, to a lesser extent, the history of humanity. We anthropomorphize time, as if what happens to humans is the only relevant measure. We are exhorted to live in the here and now. Yet on the upper reaches of the highest mountain, we live on borrowed time. Dillydally too long and we will die. When we face adverse situations, time is immediate. This immediacy provides a prism through which we can view our planet. How do we fit into the grand scheme of life? Everest, with its timeless immensity, highlights how insignificant human existence is. Standing on the summit, looking up through the troposphere to the blue, purple infinity of space, on a mountain of rock millions of years old, thrust up into the sky by a thin crust of earth floating on a moving mantle and carved away by gravity, I contemplate my place in the universe. I feel insignificant. The mountains seem to have conquered us long before we set foot on them, and they will remain long after our brief existence. This indomitable force of the mountains gives us humans a blank canvas on which to paint the drive of discovery and, in the process, test the limits of human performance.

Chomolungma, as the denizens who live within the shadow of Everest have referred to it for millennia, has always been revered as a spiritual abode. The mountain gained recognition within the Western mind only in 1849, when its measurements were announced by the Great Trigonometrical Survey of India. More than a century after it was quantified as the tallest point on Earth, Tenzing Norgay and Ed Hillary climbed Everest on May 29, 1953. After eight expeditions that cost 13 human lives, the goal had been reached at last — Earth's third pole. This landmark of exploration signified the culmination of terrestrial exploration. We had crossed the seven seas centuries earlier, mapped the ranges and rivers in due time, and reached the axes of our planet at the turn of the 20th century. Now the last and ultimate landmark had been reached.

The first ascent of Everest came at a time when humanity needed relief from two world wars. It was a unifying and inspiring event, signifying the drive to reach our greatest potential. Tenzing Norgay, a Sherpa born in the shadow of the great mountain, reached the summit with Edmund Hillary, an enthusiastic beekeeper and mountaineer from New Zealand. That an Easterner and Westerner teamed up for this historic ascent signified a new era of cooperation and a transition away from colonial rule. Times were changing, and Everest was symbolic of this change.

Reprinted with permission from the book The Call of Everest: The History, Science, and Future of the World's Tallest Mountain by Conrad Anker. Copyright © 2013 by Conrad Anker. All rights reserved.