Accessibility links
One and Only NPR coverage of One and Only: The Freedom of Having an Only Child, and the Joy of Being One by Lauren Sandler. News, author interviews, critics' picks and more.

The Freedom of Having an Only Child, and the Joy of Being One

Title
One and Only
Subtitle
The Freedom of Having an Only Child, and the Joy of Being One
Author
Lauren Sandler

A prominent journalist, only child, and mother of an only child presents a case in support of one-child family life, offering perspectives on how single-child families can benefit the economy and environment while promoting child and parent autonomy.

NPR stories about One and Only 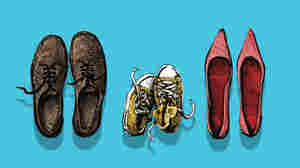 June 11, 2013 • In 1907, the first president of the American Psychological Association called only children "sickly, selfish, strange, and stupid." In her book One and Only, journalist Lauren Sandler, an only child and mother of one, takes on these stereotypes and explains the joys of raising just one.

Excerpt: One And Only

This is not a memoir, but to conform to what's expected of an only child, let me start with myself.

"It was all about me," she freely admits to me one night, in a way that simultaneously makes my chest swell with pride (feminism!) and my shoulders contract with a cringe (selfishness!).

"When you were three," she goes on, "I thought I was pregnant. I stayed up all night making a pros and cons list. By morning, it was clear to me I couldn't have another kid." She easily recites the "con" litany: she could continue her career uninterrupted, stay in the apartment she loved instead of trading urbanity for a suburban existence, maintain a certain level of independence, and worry less about money.

I interrupt her to ask about the "pro" list. I have no idea what she's going to say. She's never so much as suggested that there would be a competing list. Instead of replying, she continues, "I just would have had to be a totally different person with another kid. My life would have utterly changed. Luckily, it turned out I wasn't pregnant."

My father studies the label on his beer bottle. "Dad, what did you want?" I ask. My father looks up at me. "I so loved parenting; I always wanted the experience to be varied, to go on," he says quietly. A vocal strain belies his next words: "But you know me. I'm not a regretful person." He looks back down at his bottle. "What can I say," he says. "The years passed. It became the choice. Here we are." He grins at me. "Where we are isn't half bad, I might add. It just took me some time to get used to the idea."

It takes us all some time to get used to the idea. As only children, we have to get used to lacking something that the majority of people have for better or for worse. As parents who choose to stop at one, we have to get used to the nagging feeling that we are choosing for our own children something they can never undo. We're deciding not to know two kids splashing in the bubble bath, playing in the pile of raked leaves, whispering under the cover of darkness, teasing each other at the dinner table, holding hands at our funerals.

Everyone seems to think they know who we are, both singletons and parents of singletons. We are the selfish ones. I must be doubly so, as an only child myself, and the mother of one. Who else but an only child would have the sense of self-importance to write about being one, much less suggest that other people consider it for themselves? But after investigating the whole matter, let me offer this spoiler: I don't buy it.

Lonely. Selfish. Maladjusted. These are the words that Toni Falbo, the leading researcher in the small field of only child studies, uses to explain our image of only children. Falbo lists these characteristics so often, they tend to run together as a single word: lonelyselfishmaladjusted.

Why did this idea take hold? The academic basis of the miserable singleton specimen was the work of one man, who famously lectured, "Being an only child is a disease in itself." Granville Stanley Hall was a leader of the late-nineteenth-century child-study movement and had a national network of study groups called Hall Clubs that spread his teachings. Not a bad way to disseminate his 1896 study, "Of Peculiar and Exceptional Children," which described only children as permanent misfits. Never mind that Hall also openly fetishized his own agrarian, big-brood upbringing and disdained the smaller-family urbanity that was creeping into a rapidly industrializing country. Just consider that Hall — and every other fledgling psychologist — knew close to nothing about credible research practices.

Yet for decades, academics and advice columnists alike spread his conclusion that an only child could not develop the same capacity for adjustment as children with siblings.

Name a genre, and there's a list of characters to give the stereotype narrative heft and form: Tom Ripley, Veruca Salt, Eric Cartman. Even superheroes fit the stereotype, misfit loners incapable of truly connecting with citizens of the real world, suspicious in their overintelligence, often fighting against their privilege. But this troubled image projected onto the popular consciousness can be complicated by the real-life heroism of some singletons whose ability to connect with others was central to their own superpowers: you might not know it, but Mahatma Gandhi, Eleanor Roosevelt, and Walter Cronkite were only children too.

The majority of parents say they have second children for the sake of their first child, or at least that's what they've told Gallup pollsters for decades. But it's hard to imagine anything that can be reduced to a simple survey question, much less an issue that layers notions of family, happiness, responsibility, legacy — life and death itself, when you think about it. Still, we all know that there's truth in this response: first children tend to be a choice parents make to fulfill their own lives and a second child tends to be a choice parents make to fulfill the life of their existing child.

Some people believe that a family with one child isn't really a family, although I defy anyone to strictly define familial normalcy today. Kids are increasingly — and happily — raised by same-sex parents (in fact, recent studies suggest that lesbian mothers are the best parents of all). Divorce is as common as not. In vitro fertilization has pushed the possible age of conception into the midforties. Siblings are almost as likely stepbrothers and step- sisters as they are the children of their own biological parents.

Such developments in the way we define a family produce questions about how to define an only child. Statisticians tend to use the rule that if you spent your first seven years raised as the sole child in a household, you count as one. But I've met plenty of people who consider themselves onlies because they felt estranged from stepsiblings, and others who would never think of themselves as singletons, despite an age gap of a dozen-odd years, because of how close they are to a brother or sister.

Here are some things I want: I want to do meaningful work. I want to travel. I want to eat in restaurants and drink in bars. I want to go to movies and concerts. I want to read novels. I want to marinate in solitude. I want to have friendships that regularly sustain and exhilarate me. I want a romantic relationship that involves daily communication beyond interrogatives and imperatives — I want to be known. And I want to snuggle with my daughter for as long as she'll let me, being as present in her life as I can while giving her all the space she needs to discover life on her own terms. I want full participation: in the world, in my family, in my friendships, and in my own actualization.

There are plenty of parents who deeply want more than one child and are willing to make profound compromises to have the family they want. The last thing we need is another person telling women what they should or should not do with their fallopian tubes, their finances, and their futures. I'm not here to preach the Gospel of the Only Child.

And if it's not because I want to — I mean, really want to — have another child, there's a body of supposed knowledge I need to start questioning. For myself. For my daughter. And for the world I brought her into. Instead of making a choice to enlarge our families based on stereotypes or cultural pressure, we can instead make that most profound choice our most purely independent one. It might even feel like something people rarely associate with parenting: it might feel like freedom.