Cows Save the Planet

Cows Save the Planet

And Other Improbable Ways of Restoring Soil to Heal the Earth

Title
Cows Save the Planet
Subtitle
And Other Improbable Ways of Restoring Soil to Heal the Earth
Author
Judith D. Schwartz and Gretel Ehrlich

This book explains the role of soil in ecology and the economy, and reveals how treating soil in an environmentally sensitive way can bring about positive changes with respect to climate change, biodiversity loss, obesity, and other crises.

NPR stories about Cows Save the Planet 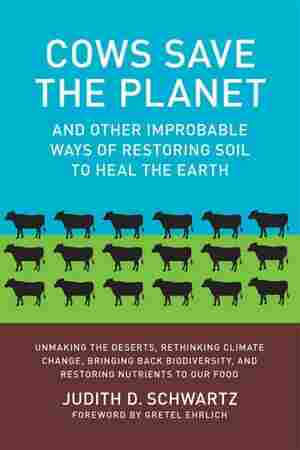 'Cows Save The Planet': Soil's Secrets For Saving The Earth

June 17, 2013 • Journalist Judith Schwartz believes that the key to addressing carbon issues and climate change lies beneath our feet. In her book Cows Save The Planet, she argues that proper management of soil could solve a long list of environmental problems.

'Cows Save The Planet': Soil's Secrets For Saving The Earth

Excerpt: Cows Save The Planet

Cows saving the planet? Why not? An idea that sounds preposterous begins to make sense if we stop to take a soil's-eye view of our current environmental predicament. To crouch down to ground level — literally or metaphorically — and see how human and animal activity enhances or does violence to that fine earthy layer that hugs our planet. To appreciate the imperceptible animal-vegetable-mineral dance that keeps us alive.

You see, that brown stuff we rush to wash off our hands (or, depending on our age, our knees) is the crux of most biological functions that sustain life. Soil is where food is created and where waste decays. It absorbs and holds water; or, if exhausted of organic matter, streams it away. It filters biological toxins and can store enough carbon to reduce carbon dioxide levels significantly and relatively quickly. It is home to more than 95 percent of all forms of terrestrial life. In any given place the quality of the soil greatly determines the nutritional value of food, how an area weathers drought or storms, and whether an ecosystem is teeming with life or the equivalent of a ghost town.

Where do those cows fit in? Cattle, like all grazing creatures, can, if appropriately managed, help build soil. When moved in large herds according to a planned schedule, livestock will nibble plants just enough to stimulate plant and root growth, trample the ground in a way that breaks apart caked earth to allow dormant seeds to germinate and water to seep in, and leave dung and urine to fertilize the soil with organic matter (aka carbon). The result is a wide variety of grasses and other deep-rooted plants and rich, aerated soil that acts like a great big sponge so as to minimize runoff and erosion. (Cows and their eruptive digestion habits have gotten a bad rap of late). The use of ungulates such as cattle in land restoration, a practice called Holistic Management, was developed and refined over the decades by Allan Savory, a farmer and rancher and former opposition leader to then-Rhodesia's white government. With cows or other grazers operating under Holistic Management across large areas of degrading land, this could mean a great deal of soil created or preserved.

If you're wondering why we want to build soil — isn't there enough dirt out there already? — consider this: Around the globe, we're losing topsoil somewhere between ten times (in the United States) and forty times (China and India) faster than we're generating it, some eighty-three billion tons of it a year. Soil is pounded off fields during a rainstorm; it runs down our rivers; its surfaces are over- and undergrazed; when left uncovered it loses its organic matter as carbon oxidizes and enters the atmosphere. Despite our collective societal indifference to soil, we've all got a large stake in its fortunes. In an oft-quoted and paraphrased line, "Man has only a thin layer of soil between himself and starvation." Up to now, we've been heedless with our soils. And we're paying the price.

Let me clarify right up front: If a few years ago someone told me I'd be writing about soil, much less be fascinated and excited by it, I'd have said they were crazy. Wait, I'll correct that — since I'd begun reporting on the New Economics and the juncture of economics and the environment, I'd grown accustomed to finding my thinking stretched in new and improbable directions. As a suburban-raised writer who can barely tend a houseplant, I'd rank as among the least likely of guides to this rich, brown mantle of our planet and its potential role in restoring our environment. But bear with me as I make the case that soil can be seen as the crucible for our many over-lapping environmental, economic, and social crises (excess atmospheric carbon dioxide, drought, floods, wildfires, food scarcity, desertification, and obesity/malnutrition). And that focusing on soil restoration will allow us to begin to chip away at these seemingly insurmountable problems.

In considering our environmental challenges, one wild card is the extent of nature's ability to heal itself. The awareness that restorative feedback mechanisms may be greater and more powerful than we appreciate gives me tremendous hope. A few years back I attended the annual E. F. Schumacher Lectures at what is now the Schumacher Center for a New Economics in Great Barrington, Massachusetts, not far from where I live. (Schumacher was the fellow who wrote the early-1970s book Small Is Beautiful, with the evocative but oft-ignored subtitle Economics as if People Mattered.) At the end of the day I was standing around among a group chatting with Alisa Gravitz, executive director of Green America, who'd given a talk called "Everyone Is an Activist." The speakers, including environmental stalwart Bill McKibben, had done a fabulous job of articulating just how dark the state of our environment was, and I think many of us were looking for some flicker of hope to carry home. Gravitz has an easygoing, upbeat style, so several of us were drawn to her.

One woman asked straight-out how to keep going in the face of constant bad news. Gravitz thought for a minute, then said that she grew up near Lake Erie, which in the 1960s was declared "dead." (Famously, in 1969 Cleveland's Cuyahoga River, a tributary to Lake Erie, burst into flames.) They were told that restoring the lake would take decades, Gravitz recalled, but very quickly signs of life appeared. With tightened pollution restrictions, including the Clean Water Act in 1972, the lake bounced back and by 1980 was a popular recreation destination. There are now large algal blooms and occasional fish die-offs. But Gravitz's point was that the lake most experts had given up on improved faster than anyone anticipated. "That's what I remember whenever I start to lose courage," she said. "We should never underestimate ecology's capacity to heal."

This made sense to me: We need to work with the natural inclination of all living things to strive toward health. We can start with one lake, one watershed, one devastated plateau, and create isles of reparation. Then, over time, fill in the gaps, jigsaw-puzzle-like. Every stretch of depleted or chemically saturated soil, every gulch and gully carved by erosion, is a wound on the landscape. We can heal those wounds by tending to the soil.