A Life Caring for Children

The pediatrician shares the life-shaping experiences that inspired his career, from the Texas childhood during which he routinely cared for younger cousins to his revolutionary observations of newborn behavior.

NPR stories about Learning to Listen 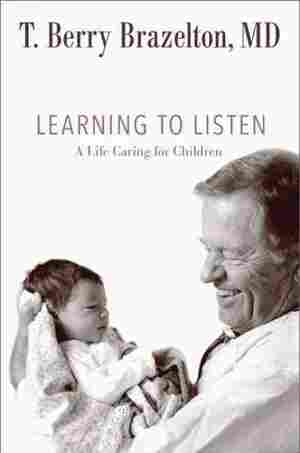 June 16, 2013 • Dr. T. Berry Brazelton has been studying babies for the better part of the last century. Now 95 years old, the renowned pediatrician is the author of more than 30 books on child development. He talks about his latest book, and how babies themselves can teach us how to be better parents.

Excerpt: Learning To Listen: A Life Caring For Children

My mother was a gallant and strong-minded woman. Gifted as a pianist, she was sent away to the conservatory in Cleveland and subsequently performed as a solo pianist with the Fort Worth symphony. At some point in her teens she was diagnosed with TB (as were so many in those days) and sent to a spa in Asheville, North Carolina, for the summer. One night while playing the piano, she was approached by my father, then a sprightly Princetonian. "Can you play any Gershwin?" Back then this was new and daring music. She played for him and their courtship began. Marriage was inevitable. My parents were married in Waco but traveled back to Asheville for their honeymoon. I'm told I was conceived at the Manor Hotel in Asheville. Though my father had wanted to settle in New York, having been offered the equivalent of a seat on the stock exchange, his father wanted him to return to Waco to help run the lumber business. In those days, sons and daughters were expected to accept their family's wishes. I am not sure that he ever fully recovered from his longing to be on the East Coast. My mother sensed his anguish at being brought back to Waco and did her best to support him. She gave up her piano for golf. They played together every day. Family meals were about the shots they should have made but didn't. They were both top seeded, so tournaments were the highlights of their lives. I've hated golf ever since and have never played it.

When I was born during the First World War, my father was away training on the East Coast. I was nine months old when he first saw me. I was told my mother was waiting in a long line at the station, dressed in her best new suit. I was in her arms, probably fingering her nose, her mouth, pulling on her earrings. A long line of uniformed and medaled men came off the train. My father would have come down the platform, half running, in his well-cut uniform with its captain's bars. He was handsome — not his face and his prominent nose but in the athletic way he carried himself. Apparently he rushed up, hugging both of us at once and took me abruptly out of my mother's arms. "Little Berry!" he shouted as he squeezed me in a big hug. As the story goes, I began to cry, louder and louder. What right did this absolute stranger have to take me from my mother's familiar and warm chest? What right did he have to yell at me and squeeze me? I'm told I wailed louder and louder, in the chaos of all these reuniting families. My father was no doubt stunned. "He doesn't like me!" he said to my mother as he handed me back.

The story rings true to me as I've grown to understand both the acute awareness of nine-month-old babies at the peak of stranger anxiety and the hypersensitivity of a new father as he tries to connect with his baby for the first time. Had my father known to wait until I reached out for him, our relationship might have been different from the first. Reflecting on this story later on sparked my interest in establishing a rapport with fathers-to-be during pregnancy and preparing them for times when their relationship with the baby may be strained, so that they can understand the baby's behavior and not feel hurt or resentful. In my practice, I've sought to capture fathers for their babies from the first.

The chance in later years to watch fathers who weren't present for the first several months of their child's life confirmed the importance of a father's early experiences with his baby. It isn't easy for a parent to catch up with the milestones of development; the stresses around a new baby — the diapering, the burping, the unresolved crying, the mistakes — all become positive steps in the family's growth. A father who has to suffer through these initial vicissitudes is setting down layers of attachment to his baby.

My father missed out on this early relationship and, perhaps as a result, always seemed pretty distant, even wary of me. I'm sure he loved me but I never really knew him. My mother fostered that distance with what I now see as unconscious "gatekeeping." In my work I've learned that everyone who cares deeply about a baby is in competition for that baby: parents with each other, grandparents who feel "if only they'd do it my way," caregiver and parent, parent and teacher, coach and parent. It's an inevitable reaction and part of attachment. Since my mother had been sole parent through my early infancy, she believed she knew me better. She probably corrected my father whenever he tried to take any responsibility for me, and, as a result, he may have given up early. I have learned that, by alerting adults who care about the same baby to this gate-keeping tendency, they are less at its mercy. Otherwise, they are bound to try to shut the other adult out. When I was older, I interpreted my father's tentativeness as disappointment. Now I am able to see it more clearly. He always professed pride in me but was distant. Remoteness may have been an incentive to me to make him proud, but it also fueled my ambitions. But we were never really friends. He actually seemed closer to my peers than to me.

Swimming and diving continued to be important to my father. He used to take me and my best friend, Jesse Milam, out to the Fish Pond country club's pool for diving lessons. He spent all of his time encouraging and praising Jesse. Yet when I'd try and even succeed in completing the same maneuvers, he was silent, without comment, as if he had expected me to learn from the teaching he gave my friend. Feeling that I couldn't please him, I became clumsier, and he would ignore me even more. To me, locker rooms smelled of sweat and danger. Perhaps the danger I felt was due to the competitive atmosphere. I dreaded going with him and have never been comfortable in clubs since. He wanted to show me off, but I must have made a poor showing. We slid right past each other in our clumsy efforts to connect as father and son. As an adult I missed out on the chance to get to know him better, for he died after my first year of medical school. Years later, when my youngest daughter asked me about her grandfather, I couldn't answer. I didn't know much about who he was as a person.

From the book Learning to Listen, by T. Berry Brazelton, MD. Reprinted by arrangement with Da Capo Press, a member of the Perseus Books Group. Copyright 2013.