When an Oxford graduate and rowing champion is pushed to his death from the top of a Harvard bell tower, troubled reporter Alexandra James investigates what she believes will be the story of a lifetime. She finds herself targeted by the CIA and a nuclear terrorist sleeper cell. 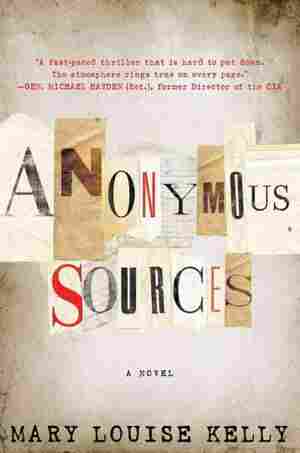 Spy Reporter Works Her 'Sources' To Write A Thriller

June 18, 2013 • Mary Louise Kelly used to cover national security for NPR, but lately she's turned her attention to fiction. Her new novel, Anonymous Sources, draws on Kelly's own reporting experiences, including things she couldn't say when she was a journalist.

Spy Reporter Works Her 'Sources' To Write A Thriller

Thomas Carlyle climbed the bell tower that night without quite planning to.

He'd arrived back in Cambridge two hours before, stiff and cranky after the long flight crammed in economy class. No one was home at the house on Brattle Street. Old pizza menus were gathering dust on the floor of the front hall, and nothing was in the fridge but a withered apple and several dozen cans of his mother's Diet Coke. So he'd dumped his bags and headed out. Fifteen minutes' walk to the local liquor store, and then — some old homing instinct kicking in here — another ten to Eliot House.

Eliot looked the same. Perhaps the most imposing of Harvard's dorms, it towered above the Charles River. Red brick, wide double doors, an overflowing bike rack out front. Students lounged outside the doors, smoking and giggling. Summer school must have started.

Thom caught the open door from one of them, nodded at the familiar-looking security guard, and turned right into the dining hall. It smelled of seafood — fish tacos, maybe — and frying onions. Dinner was in full swing.

Thom had eaten hundreds of dinners here, and fish tacos were among his favorites. But tonight he clutched his brown paper bag and headed straight for the far doors, through an archway, and toward the stairs marked H-ENTRY.

He took the stairs two or three at a time, up five flights. Then he cut down a hallway toward the door marked LEONARD BERNSTEIN '39, MUSIC ROOM AND TOWER.

He dug in his jeans pocket for the key. It turned. So the lock hadn't changed either. Two more flights, darker and narrower now. The linoleum was worn thin and stained.

When he reached the seventh floor, a small metal plaque informed him that Bernstein used to practice here in 1936. Yes, and it didn't look like they'd bothered to redecorate it since, Thom thought to himself. He smiled. He was in decent spirits, actually, considering the jet lag, and the girl. At the top, one last door. He jiggled the lock and it swung open.

The tower room was small. Dusty. Low ceilings. Surprising, really, given the grandeur of the Eliot tower and dome from the street. In the fading light Thom took in the grand piano hulking in the middle of the room. He'd always wondered how the hell they'd hauled it up here.

But the reason he'd come was for the windows. Two huge and perfectly circular windows, each maybe six feet across, one framing each end of the room. The right one was long since painted shut, if it had ever opened. But the left one bore two ancient-looking brass latches. Thom unhooked them and then remembered to kick at the bottom panes, where the paint always stuck a bit. And there it was. The whole window spun open on creaky hinges. He wedged his paper bag into the crack to keep the breeze from slamming it shut again, then hooked a leg over, lowered himself onto the sill, and peered down across the steep slate roof.

Senior year, he and his roommate, Joe, sometimes crawled right out across the roof, inching along until they could straddle the dormer windows. They would knock back a few beers and watch the girls crossing the courtyard, their laughter and teasing voices floating up from far below.

Now he looked down at the Charles River, curving toward Boston and glowing golden at this hour. On the far bank rose the dome of Harvard Business School. Thom's destiny, the way things were going. He shook the thought from his head and cracked open one of the bottles he'd purchased, walking here through Harvard Square. A thick, syrupy oatmeal stout. Not exactly the thing for this summer weather. But studying in England this past year, he'd lost his taste for the watery American lager that had been the staple of his weekends here in Eliot House.

Thom took another sip and watched the boats gliding along the Charles. Lord knew how many hours he himself had logged on this river. By the time he made varsity crew, the boathouse had felt more central to his college experience than any library, and the blisters across his hands had hardened like tiny stones. A sculler flitted past, then an eight-man crew. Was that Boston University? But why would they be practicing so late, and on summer break at that?

He squinted and craned forward, trying to make out what colors were painted on the oars. It was at that moment that hands reached from the shadows behind him. The blow landed at the bottom of his skull. A crack of wood against bone. There was a moment of perfect silence, before Thom swung his strong arms, clawing behind him. But the foot was already on his back. One kick, but hard enough to launch him off the sill and onto the roof ten feet down.

He crashed into the pointed tip of a dormer window and rolled, grabbing for a gutter, a ledge, anything. There was nothing, and he fell, wide-eyed, into the gathering twilight below.