Clarke, a 19th-century English naturalist, roams the pampas in search of that most elusive and rare animal: the Legibrerian hare, whose defining quality seems to be its ability to fly. The Hare offers reflections on love, Victorian-era colonialism, and the many ambiguities of language.

NPR stories about The Hare 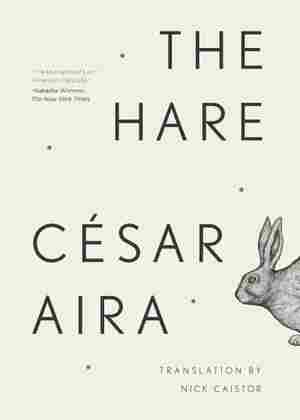 'The Hare' Leads A Merry Chase

June 26, 2013 • A British naturalist roams the pampas in search of a mythical rabbit that flies. But Cesare Aira's absurd, hilarious The Hare is no Argentine cowboy story. It's more like an episode of Star Trek — crossed with Lawrence of Arabia.

1: The Restorer of the Laws

Bathed in sweat, eyes rolling, the Restorer of the Laws leapt from his bed and stood swaying for a moment on the cold tiles, flapping his arms like a duck. He was barefoot and in his nightshirt. Two pristine white sheets, twisted and knotted by his contortions during the nightmare, were the only covering on the brass bed with leather thongs, itself the only piece of furniture in the small bedroom where he took his siestas. He picked up one of the sheets and mopped his soaking face and neck. His heart was still pounding from the memory of the horror, but the mists of his befuddled sleep were gradually lifting. He took one step, and then another, pressing his feet flat on the floor to enjoy its comforting coolness. He went over to the window and pushed back the curtain with his fingertip. The courtyard was deserted: palm trees, the sun beating down, silence. He walked back over to the cot but did not lie down again; after a moment's thought, he sat on the floor with his legs out in front of him, his back straight. The chill of the tiles on his bare buttocks gave him a brief shock of pleasure. He lifted his knees to begin his abdominal exercises. He put his hands behind his head to make them harder work. At first he struggled a little, but soon the movement became automatic, rapid, gravity-defying, so that he had time to think. He did a hundred at a stretch, automatically counting them off in tens, while his mind raced. He reconstructed the nightmare in all its details, as though this were a self-imposed punishment. The sense of well-being produced by his physical exertions helped dissipate the terror of his memories. Or more exactly, rather than dissipating it, the gymnastics made it manageable, like another number he was counting off. He was not unaware of the general meaning of those phantoms which visited him at siesta time. They were the one, the two, the three, the four, the five, the six, the seven, the eight, the nine, the ten. How mistaken those illiterate scribblers were if they thought it was the shadow of his crimes that was being cast into his sleeping consciousness. That would be counting backward: ten, nine, eight, seven, six, five, four, three, two, one. The fact was, it was the complete opposite; and if his enemies made this kind of mistake, it was precisely because by definition opposition was the point from which everything was seen backward: what obsessed him were the crimes he had not committed, a feeling of remorse at not having reached the end of his count. One, two, three, four, five, six, seven, eight, nine, ten. He had been too soft, too conventional. They said he was a monster, but what he regretted was the fact that somewhere along the way he had missed the opportunity of truly becoming one. He was sorry he could not be his own opposition, so that he could build up a picture of himself from both sides, like a neatly executed piece of embroidery. One, two, three, four ... it was his imagination that had failed him, and without imagination there could never be true cruelty. Five, six, seven, eight ... his dreams were the reverse image of the cryptic accusations published against him in those Liberal rags, first El Crap, then Muera Rosas (what imbecilic names!). The world turned upside down. Nothing but literature. The key to his dreams was barely more than regret at life passing by. What he lacked was true inventive genius, poetic agility. Nine ... he recognized the fact and was sorry for it, in this somewhat brutally frank exchange he was having with himself. But where, where, where on earth could he discover the talent necessary to change the wild reversals of the Montevideo hacks into reality, into life, into something authentically Argentine? Ten. A hundred.

While the other man was writing out a page, Rosas downed half a liter of gin with cold water. A small glass per line, which seemed to him by no means excessive. It enthralled him to watch someone write. He considered it one of the few spectacles with an intrinsic worth, which demanded nothing of the spectator. Nothing, that is, beyond a little patience, which was a quality he possessed in abundance: so much indeed that he sometimes thought he had little room for anything else. He felt that the time taken for his oral intentions to be transformed into a properly constructed and well-written page of writing was brief in the extreme. That was why he was so insistent on its neatness. It might seem that nothing was happening, but he saw nothing less than a transferral between two people; in the study's shadowy atmosphere, he could make out the faint outline of a phantom. Gestures always created a perspective, especially if they were the gestures of writing. The movement of arm, hand, eye, and pen was an intention blown up like a bladder filled with phantoms. Those phantoms were one person becoming another. He perceived all this through a shimmering haze, as if all the objects around him were coated in a sublime sheen. This was the effect of the drink in the stifling afternoon heat, but it was also part and parcel of the scene itself. He told people he had discovered that gin was the best defense against the heat; what he did not say was that in fact the heat did not trouble him. In truth, creating a pressing need for the illusion of cold when it was hot, or vice versa, could be a marvelously effective way of giving utterances reality; that must be why the human race, in its prototype of the English, spoke so meaningfully of the weather all the time. It was a world within a world, but instead of being theater this was serious, for real. Perhaps that was the meaning behind the drinks he poured himself: cold water for altering the temperature, gin for the sheen without which there could be no inclusions, or they could not be seen. It all came down to the transferral from one state to another, from one body to another, one possibility to another. Which was why, in the end, it was he and not somebody else who was the Restorer of the Laws, and was precisely that and nothing else. He was that because ... Why? No, the reason had slipped from his mind at the same lightning speed it had entered. He shrugged; mentally of course. The moment of understanding had flashed by before he could seize it. He stood as stiff as a mummy for an indefinite length of time, his mind empty. His only movement was to lift the glass to his lips. All at once, the secretary handed him the sheet of paper, a model of neatness. The other hand held out a pen, for him to sign with.