Eighteen-year-old Kit is weird: big, strange, and socially disabled. He and his father Guy live together in a decaying country house on the unstable brink of a vast quarry. Guy is dying, and old friends are gather for one last time, while Kit tries to find out who his mother is.

NPR stories about The Quarry 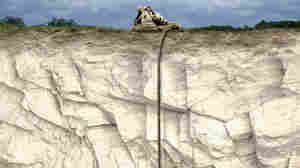 Iain Banks Bids Us Farewell With 'The Quarry'

Excerpt: The Quarry By Iain Banks

Most people are insecure, and with good reason. Not me.

This is probably because I've had to think about who I am and who I'm not, which is something your average person generally doesn't have to do. Your average person has a pair of parents, or at least a mother, or at least knows roughly where they fit into all that family business in a way that I, for better or worse, don't. Usually I think it's for the better, though sometimes not.

Also, it helps that I am very clever, if challenged in other ways. Challenged in this context means that I am weird, strange, odd, socially disabled, forever looking at things from an unusual angle, or however you want to put it.

Most things, I've come to understand, fit into some sort of spectrum. The descriptions of myself fit into a spectrum that stretches from 'highly gifted' at one end to 'nutter' at the other, both of which I am comfortable with. One comes from understanding and respect, while the other comes from ignorance and fear. Mrs Willoughby explained the thinking behind both terms. Well, she explained the thinking behind the latter term, the offensive, deliberately hurtful term; the thinking behind the former, respectful judgement seemed perfectly clear and valid to me. (She got that wincing expression on her face when I mentioned this, but didn't say anything. Hol was more direct.)

'I know. It's not the being clever that's the problem, Kit. It's the telling people.'

'Plus, you're missing something.'

I felt myself rock back in my seat. 'Really?'

'Yes. There are different types of cleverness.'

'Hmm,' I said, which is what I've learned to say rather than the things I used to say, like, No there aren't, or, Are you sure? — in what was, apparently, a sarcastic tone.

'If nothing else,' Hol said, 'other people think that there are different types of cleverness, and that's what matters, in this context.'

One of the ways I am clever is that I can pay very close attention to exactly what people say and how they phrase things. With Hol this works especially well because she is quite clever too, and expresses herself well, and mostly in proper sentences (Holly is a journalist, so perhaps the habits of her trade have had an effect). Also, we have known each other a long time. With other people it can be harder. Even Guy – whom I've known even longer, because he's my dad, after all — can be a bit opaque sometimes. Especially now, of course, as he's dying. They don't think there is a tumour in his head affecting his mind, but he is on a lot of mind-muddling medication.

So, to return to Hol's last phrase, 'in this context': there was an almost audible clunk as she added these words to the end of the sentence. She put those words in there because she knows that I like them, that they make a difference to me. Both Hol and Mrs Willoughby have explained to me — sometimes at great length — that context matters a lot in various situations, and especially in social interactions, which is the stuff I tend to have difficulties with. Adding 'in this context' means she – Hol — wanted me to think about what she'd just said rather than just dismiss it out of hand because it seemed to me at the time that there was, plainly, only one sort of cleverness.

Anyway, other people 'thinking' that there are different types of cleverness was, apparently, what I was supposed to focus on.

'Are you sure, Hol?' I asked, patiently.

'There you go, sounding sarcastic and patronising.'

'But I wasn't being either. I was trying to sound patient.'

'Again, what you meant isn't what matters, Kit. What matters is how you appear, what other people think you meant.'

'It's not my problem if ... ' I began, then fell silent under a look from Hol. The look concerned involves her dipping her head a little to the right and her eyebrows rising while her lips purse a fraction. It was her look that says, as near as I can gauge it, 'Now, Kit, we've been over this before.'

'It is your problem,' she told me. 'If you've given people the wrong impression when you could have given them the right one, you've — '

'Yes yes yes, I need to make allowances for people,' I said, wanting to get back to the proper point. I may have waved my hands, too. 'So, what other sorts of cleverness are there?'

Hol sighed. 'Emotional cleverness, Kit. Empathising with others, getting on with people, intuiting what and how they think.'

'But if people would just say what they — '

I got the look again.

Now it was my turn to sigh. 'That's another area where I have to make allowances, isn't it?'

'Yes, it is. Plus, people don't always know what they think themselves, Kit,' Hol told me (and, in another turnaround, now she was sounding what you might call conspicuously patient). 'Not precisely, not so they can tell you clearly and unambiguously and without contradictions.' She paused, probably waiting for me to protest that, well, people just should know what they think, and express it properly (it was certainly what I was thinking). But I didn't say it. 'And a lot of the time,' she continued – when I just sat there and smiled the way she'd taught me — 'even when people do know what they think and why, they don't always want to tell you.' Another pause. 'Sometimes because they don't want to hurt your feelings, or give you something you might use against them later, either directly against them, to their face, or use against them by mentioning what's just been said to somebody else.'

'Often, yes,' Hol agreed, and smiled. Hol has a plain face but the consensus seems to be that it lights up when she smiles. I like to see her smile, and especially I like to see her smile at me, so I suppose this must be true. Hol has always been my favourite of Dad's old friends (not that he really has any new ones). Even before we came to our financial arrangement, I knew that I trusted her and I would listen to her and take her seriously. 'Sometimes,' she went on, 'they're ashamed of what they're thinking, or just need more time to decide what they really, truly feel, because emotions can get very ... well, tangled.'

'So,' I said, 'what you're saying is, it's complicated.' (This is almost a joke between us. A lot of apparently simple things seem to end up being 'complicated'.)

I thought about this. 'Well, everybody, obviously.'

Holly nodded. 'Well, everybody else, Kit.'

'So I ought to hide my light under a bushel?'

'Oh, Jeez, Kit, you haven't been reading the Bible again, have you?'

'Is that where that's from?'

'No. But should I? Hide my light under a bushel, I mean?'

'Well, just don't insist on putting it under a magnifying glass.'

We were in the sitting room of the house, sitting on overstuffed but threadbare couches on either side of the large, interestingly warped coffee table. A large vase of black glass containing real flowers sat between us. Usually we keep artificial flowers in this vase because real ones are such a bother and the only reason the vase is there anyway is to catch drips falling from the water-stained ceiling directly above. Holly had put the real flowers there. They were yellow; daffodils. This was spring, as in last spring, four Holly visits ago, when Guy seemed to be on the mend, or at least when the cancer was in remission.

I sat back in the seat and nodded in what I hoped was a decisive manner. 'I understand.'

Hol frowned. 'Hmm,' she said. 'Hu-fucking-rah.' (She is, unfortunately, somewhat prone to swearing, so arguably not that clever after all.)