Eating on the Wild Side

Eating on the Wild Side

The Missing Link to Optimum Health

by Jo Robinson and Andie Styner

Describes how to replace modern fruits and vegetables, which are high in starch and sugar and lower in nutrients than earlier generations of the plants, with different varieties, easily located in grocery stores and farmers markets, that have better nutritional value. 75,000 first printing.

NPR stories about Eating on the Wild Side 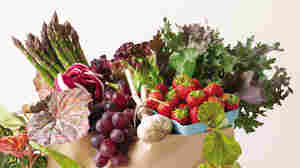 The cover of Eating on the Wild Side. Little Brown and Company hide caption

July 10, 2013 • Our modern fruits, grains and vegetables aren't nearly as nutrition-packed as their wild counterparts were thousands of years ago, says health writer Jo Robinson.

Excerpt: 'Eating On The Wild Side'

From Hunter-Gatherers to Farmers

Until the invention of farming, all the people on the planet lived on wild plants and animals. Anthropologists tell us that these long-ago ancestors lived in small clans of twenty to forty people and moved from camp to camp throughout the year in search of food. They timed their journeys to coincide with the annual migration of game and the ripening of wild nuts, seeds, fruits, and vegetables. By necessity, all their food was local, organic, and seasonal. Because they hunted or foraged all their food, they are referred to as hunter-gatherers.

Our distant relatives continued to dine at nature's café until roughly five thousand to twelve thousand years ago. Then, for reasons not fully understood, groups of people in a handful of areas around the world broke ties with the past and began to raise their own food. In addition to hunting for wild game, they began to tame wild goats, pigs, and sheep so they could have a ready supply of meat. They milked the goats and sheep and turned their milk into cheese and fermented drinks.

They also began to create the very first gardens. In the beginning, gardening was a simple affair. The first farmers gathered seeds and cuttings from wild plants and grew them in one location to make them easier to tend and harvest. For many generations, the farmers raised too little food to meet all their needs, so they continued to gather wild plants. As the centuries passed, however, our ancestors became such skilled farmers that they were able to stop wandering in search of food and settle down in the first permanent settlements. Our species had made the epic transition from being hunters and gatherers to being herders and gardeners. The Agricultural Revolution — the great-grandmother of all food revolutions — had begun.

We Are the Food Makers

As we humans set off on our excellent adventure in agriculture, all the other creatures on the planet remained true to their original diets — and do so to this day. Zebras, lemurs, elephants, eagles, rodents, weasels, bats, wombats, and the great apes eat the same food today as they did eons ago, provided we've left them enough habitat. Although animal handlers report that captive chimpanzees prefer M&M's to bananas, the chimps have yet to make any candy. Out of an estimated seven million species of animals, we alone had the intelligence, dexterity, and ability to plan for the future that allowed us to walk away from our native diet and create a brand-new menu that was more to our liking.

Therein lies the problem. Starting with the very first gardens, our farming ancestors chose to cultivate the wild plants that were the most pleasurable to eat. As a rule, the chosen plants were tender, low in bitterness and astringency, and high in sugar, starch, or oil. Plants that were bitter, tough, thick-skinned, dry, devoid of sugar, or too seedy were left behind in the wilderness. Why go to the trouble of cultivating plants that are unpleasant to eat?

Archaeologists have gathered detailed evidence about those earliest food choices. Wild figs and dates were two of the first plants to be cultivated, and they are among the sweetest of all native fruits. Although hunter-gatherers had consumed only small amounts of grain, the first farmers made starchy cereal grains a central part of their diet. Farmers in the Middle East grew wheat, barley, and millet. African farmers raised pearl millet and sorghum. Corn was king throughout the Americas, and rice became the staple crop of Asia. The era of carbs had begun.

Then as now, people knew what they wanted to eat — sweet, starchy, and fatty food. Because of our ancestors' extraordinary efforts, they were able to produce an abundant supply of these "must-have" plants within a short walking distance of their dwellings. For the first time in our long history on the planet, we humans no longer had to eat bitter or fibrous food or spend hours every day processing our food to make it fit to eat. We were creating the food supply of our dreams.

We now know that one of the consequences of cultivating the sweetest and mildest-tasting wild plants was a dramatic loss in phytonutrients. Many of the most beneficial bionutrients have a sour, astringent, or bitter taste. Unwittingly, when our ancestors rejected strong-tasting fruits and vegetables, they were lowering their protection against a long list of diseases and troubling conditions. Throughout our history of agriculture, our ability to transform our diet has far exceeded our understanding of the way those changes impact our health and well-being.

By the time of the Roman Empire, 250 generations of farmers had already played a role in reshaping the human diet. The differences between wild plants and our man-made varieties had, even then, become marked. The roots of domesticated beets, carrots, and parsnips were twice as large as the roots of their wild ancestors, and they contained less protein, more sugar, and more starch. Most domesticated fruits were several times larger than wild fruits, and they had thinner skins, more sugar, less fiber, more pulp, and fewer antioxidants. Cultivated greens were less bitter and, as a direct consequence, had fewer health-enhancing phytonutrients.

By the end of the nineteenth century, people around the world had created hundreds of thousands of new varieties designed to satisfy their needs and wishes. In the twentieth century, science-based breeding techniques speeded up the process. A plant breeder could start out with an idea for a new variety of plum or corn and make it a reality in just ten years, not several generations. Now, plant geneticists can insert foreign genes into corn or beets or potatoes and create a new variety in a matter of hours.

To this day, the nutritional content of our man-made varieties has been an afterthought. A plant researcher for the United States Department of Agriculture (USDA) can spend years perfecting a new variety of blackberry or apple without ever measuring its phytonutrient content or its effect on blood sugar. If the variety is attractive, pleasing to eat, productive, and disease resistant, it is considered a triumph. Meanwhile, our bodies hunger for the nutrients that we have left by the wayside.