A Cook's Guide to Home Canning, Pickling, and Preserving

An illustrated reference for home cooks and preserving enthusiasts provides more than 100 seasonally organized recipes for options ranging from sweet preserves and savory pickles to produce and condiments. In addition to recipes, Saving the Season includes related information about safety, nutrition and American preserving traditions.

NPR stories about Saving the Season 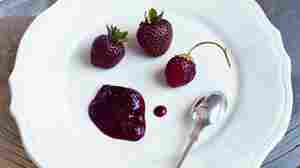 June 29, 2013 • Kevin West, author and blogger, takes NPR's Lynn Neary to a farmers market to choose the summer's best produce for canning. "You take this experience ... and you put it in the jar. And six months from now we will re-experience that moment," West says. 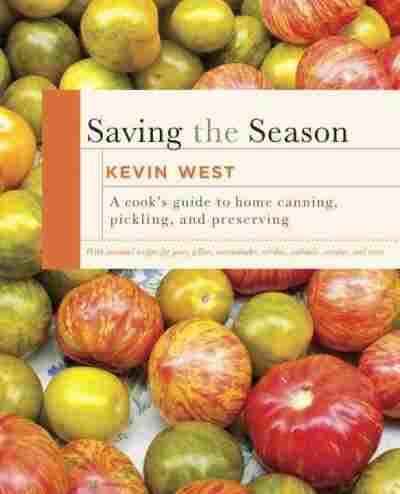 From Saving the Season

June 24 is the Nativity of Saint John the Baptist, the traditional day to harvest green walnuts for making nocino, a delicious liqueur invented at a congress of witches, according to Anna Tasca Lanza, the doyenne of Sicilian cooking. Lanza's witches were Italian, but other countries from Croatia to France to the chilly Teutonic regions equally claim greenwalnut liqueur as their own. I learned to make it at the Institute of Domestic Technology, a cooking school in Altadena, California, where I also teach. When you harvest the nuts—working barefoot, according to some folklore—they are smaller than eggs, smooth to the touch, and crisp like apples, because the shells have not yet hardened. The nutmeats, at this stage, are jelly. Like most liqueurs, nocino is easy but requires patience. You slice the nuts and cover them with strong booze, sugar, and spice, and allow the mixture to infuse for forty days, until it is nearly black. The real test of patience begins after you bottle it. Ten-year-old nocino is said to be the best, and certainly you would never drink this summer's batch before cold weather sets in this fall. Mature nocino has a complex flavor of nutmeg, allspice, coffee, and caramel. Drink it neat as a digestif, or use it to flavor desserts. A few tablespoons of nocino lightly whisked into a cup of heavy cream will cause it to seize, as if magically transformed into cooked custard. The thickened cream is called "posset," and can be used as a sauce alongside cakes or other desserts.

My nocino recipe is based on those from the Institute of Domestic Technology and Lanza's Sicilian cookbookThe Garden of Endangered Fruit. Its fundamentals are green walnuts, 80-proof grain spirits, and sugar. (My secret ingredient is coffee beans.)You can change the aromatics if you like, but use small quantities, because the spices can take over. Green walnuts are sometimes available at farmers' markets, or can be ordered online at www.localharvest.org.

1. Quarter the walnuts and place them in a large glass jar, at least 3-quart capacity. Add the remaining ingredients and stir. Don't worry that the sugar won't immediately dissolve. Seal the jar, and place it in a sunny place for 40 days. The liquid will first turn a sinister green, then black. Once every 10 days, agitate the jar by inverting it a time or two. You can taste the alcohol at any stage and add more aromatics if you like.

2. After 40 days, strain the contents of the jar through a damp jelly bag and catch the liquids in a bowl. Funnel the liqueur into scalded bottles, and seal. Store in a cool, dark place for several months; Lanza suggests opening them on All Saints' Day. Before serving, you may want to strain the liqueur through a coffee filter to remove sediments, but it isn't necessary to do so. The liqueur will keep indefinitely without refrigeration.

On page 39, I explain that processing your pickles in a hot-water bath rather than a boiling-water bath will give you a firmer texture. It follows that if you want pickles with real snap, don't process them at all. These dill-pickle spears—or sandwich chips, depending on how you slice them—can be processed, if you want, for long- term shelf storage, but first try making a batch to keep in the refrigerator. They will be crisp, and the flavor of raw cucumber comes through. It's the freshest-tasting pickle in this book, and perhaps my favorite. The recipe can be scaled up.

1. Dissolve the salt in the water, and add the coriander, fennel, and dill. Set aside.

2. Scrub the cucumbers well, rubbing off any spines. Cut away a thin round from the stem and blossom ends, and slice lengthwise into quarters. Put the spears in a large bowl, and cover with the brine. Weight the cucumbers with a plate, cover the bowl with a kitchen towel, and set aside for 24 hours. If the bowl won't fit in your refrigerator, it's fine to leave it out at room temperature.

3. The next day, pack the cucumber spears into two scalded quart jars, saving the brine. Measure out 2 cups of the brine and reserve. Strain the remaining brine through a fi ne sieve to capture the aromatics, and divide them between the jars. Tuck a dill head and two cloves of garlic into each jar.

4. Mix the vinegar and the 2 cups reserved brine, and bring to a boil. Pour it over the pickles to cover. Seal the jars, and store in the refrigerator for a week before using. For long- term shelf storage, leave ½ inch headspace when filling the jars, then seal. Process in a boiling- water bath for 10 minutes, or in a hot- water bath, between 180 and 185 degrees, for 30 minutes.

[Note] Instead of spears, you could slice your cucumbers into round coins, lengthwise "slabs," or bias-cut ovals. Make the slices 3/8 inch thick and soak them in the brine for 12 hours instead of 24.

When you're making preserves, fully 50 percent of your success is in the shopping—good fruit makes good jam. Technique matters also, and a sound recipe makes a difference. But the crucial remaining factor is organization. Especially when dealing with a large quantity of perishable fruits or vegetables, you have to think through your strategy and plot out your work. If you can't get everything put up immediately, you have to take into account how the produce will ripen—and soon fade—as it waits for you. My strategy for how to use a bushel of peaches would look something like this:

First day/underripe fruit: Pectin levels peak just before ripening, so I'd start with peach jelly, using the same technique as for Apricot Jelly on page 184. If you don't want to make jelly, give the peaches another day to ripen.

First day/just-ripe fruit: Peaches that are fragrant and slightly yielding but still firm enough to handle are ideal for canning in syrup, as either halves or slices in syrup.

Third day/dead-ripe fruit: By now, the peaches will likely have a few brown spots that will need to be cut away, so I'd work up a batch of chutney, which requires long, slow cooking that breaks down the fruit anyway.

Fourth day/tired fruit: Whatever peaches haven't been used by now will likely look a little sad, but even really soft, spotty ones can be trimmed for a batch of Spiced Peach Butter (page 239). Southern peach chutney evolved from an Indian relish calledchatni that British colonials brought home during the days when the sun never set on the Empire. According toThe Oxford Companion to Food, chatni is made fresh before a meal by grinding spices and adding them to a paste of tamarind, garlic, and limes or coconut. Pieces of fruit or vegetable may be incorporated, but the chief flavor characteristic is sour. The British turned that into a fruit preserve, explains the Oxford Companion: British chutneys are usually spiced, sweet, fruitpickles, having something of the consistency of jam. Highest esteem is accorded to mangochutney. . . .Chutney later spread across the Atlantic to the West Indies and the American South, wherethe esteemed mango was replaced by the honorable peach.

1. Combine all the ingredients in a deep pot, and bring to a boil. Moderate the heat, and reduce for as long as an hour, until all the excess liquid boils away and what remains is thick and jamlike in texture. Be sure to taste the chutney at several points, and adjust the seasonings to your preference. Chutney should be deeply flavored and complex, with at least a bit of spicy heat. If you like the bright taste of green chilies, add more minced jalapeños during the last 10 minutes of cooking.

2. Ladle the hot chutney into four prepared pint jars, leaving ¼ inch headspace. Seal, and process in a boiling- water bath for 10 minutes. Allow to cure for a month before eating.