Six Weeks That Saved the Nation

The War of 1812 turned around during a pivotal six-week period in 1814 that enabled a nearly defeated U.S. to rally against British forces in Baltimore.

NPR stories about Through the Perilous Fight 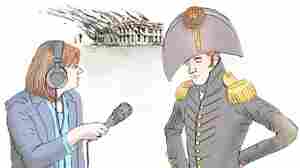 Tamara Keith on the scene in 1814. Sort of. Leif Parsons for NPR hide caption

August 21, 2014 • Two hundred years ago this week, invading British troops destroyed the White House and the U.S. Capitol. NPR wasn't there, but if we were, our coverage might have sounded something like this ... 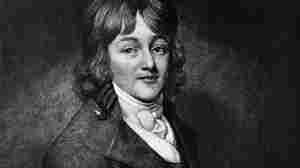 July 4, 2013 • Francis Scott Key wrote the words to the ballad after witnessing the Battle for Baltimore in 1814. According to author Steve Vogel, after it was published, Key's composition took the country by storm. But it didn't become the national anthem until more than 100 years later.

Excerpt: Through The Perilous Fight

Sailing under a white flag of truce, American agent John Stuart Skinner rounded Point Lookout and into the broad mouth of the Potomac River, searching for the enemy fleet. The river was at its widest here, three miles from shore to shore as its water lazily flowed toward the Chesapeake Bay. The sultry August weather so common in the bay had turned cool overnight, and the day was refreshingly crisp. Even from a distance it was easy to spot the HMS Albion. The 74-gun ship-of-the line, weighing nearly 1,700 tons and manned by a crew of 620, was one of the most powerful British warships in North America, and it was surrounded by nearly two-dozen accompanying brigs, sloops, and tenders.

More daunting than the ships and weaponry was the man the agent had come to see: Rear Admiral George Cockburn. He was the most hated man in America, and the most feared. Americans variously compared him to Attila the Hun, Satan, and the most notorious barbarians of ancient times.

For more than a year, the British naval squadron commander had waged a campaign of terror along the Chesapeake Bay, sacking Havre de Grace at the mouth of the Susquehanna, ravaging Hampton, plundering the Virginia shoreline, and torching farms in Maryland, acts that had infuriated Americans. Ruthless, witty and swashbuckling, the lowlands Scot was determined to make Americans pay a hard price for their ill-considered war with Great Britain.

"[T]here breathes not in any quarter of the globe a more savage monster than this same British Admiral," The Boston Gazette declared. "He is a disgrace to England and to human nature." A 4th of July celebration in Talbot County, Maryland, included a toast to Cockburn, "a man in person but a brute in principle; may the Chesapeake be his watery grave." One irate citizen had offered $1,000 for the admiral's head or "five hundred dollars for each of his ears, on delivery."

Skinner, the American agent, had sailed from Baltimore on August 7, 1814, bearing official dispatches for the British. As the government's designated prisoner of war agent, the 26-year-old Skinner was a veteran of on many such missions, carrying communications from Washington or negotiating prisoner exchanges. He was as familiar as anyone in America with Cockburn and his depredations. Just three weeks previously, the British had burned the Maryland plantation in Prince Frederick where Skinner had been born, and earlier in the summer, they had torched his barn and property at nearby St. Leonard. But if he held a grudge, Skinner was too savvy to make it known to Cockburn.

As usual, Skinner was courteously welcomed aboard Albion. For all of Cockburn's haughty bombast and undisputed ruthlessness, Skinner had found him to be a gracious host, always seating him for a meal at the admiral's table and ready to extend "many little offices of liberality and kindness ... to mitigate the rigors of war." Skinner had a rough-and-tumble personality to match his pugilistic face, as well as an innate candor, all of which Cockburn appreciated.

That day, the admiral, his face reddened by the relentless Chesapeake sun, was in a good mood, just having completed a series of raids that had terrified the Potomac shores of Virginia's Northern Neck. At 2 a.m. on August 3, Cockburn had started up the Yeocomico River, probing the little waterway off the Potomac with a force of 500 sailors and Royal Marines in 20 barges. Among them, dressed in red coats, were a special company of 120 Colonial Marines — slaves who had escaped to the British from plantations in Virginia and Maryland, and trained under Cockburn's orders to fight their former masters. Their use was a particularly brilliant and insidious stroke, inciting deep-seated fears among the locals of a slave revolt.

A Virginia militia artillery company waiting at Mundy's Point opened fire on the British with six-pound cannons, and the first shot beheaded a marine in the lead boat. The Virginians poured fire on the invaders, but ran low on ammunition. Major Pemberton Claughton, one of the Virginia militia commanders, was shocked to see a slave who had escaped from his plantation among the redcoats swarming ashore. Admiral Cockburn, at the head of this "gallant band" of British seamen and freed slaves, reported that he chased the retreating Americans ten miles "almost at a run," burning every house they passed, including Major Claughton's home. Finally, the raiding party collapsed on the ground, exhausted by the 90-degree heat. But there was no time for rest — Cockburn learned that the Virginia militia was regrouping at the nearby village of Kinsale.

"What! Englishmen tired with a fine morning's walk like this," cried Cockburn. "Here, give me your musket; here, yours, my man. Your admiral will carry them for you." Cockburn placed a musket on each shoulder and began marching, with "the desired effect of rousing the men afresh," wrote his aide-de-camp, Capt. James Scott.

Leading from the front was the Cockburn way, and so was what followed. Returning to their boats, the British sailed to Kinsale, opened fire on the town, and scattered the militia. "Here we killed 8," wrote Capt. Robert Rowley, one of Cockburn's party. "Saw a quantity of blood evidently from wounded carried off."

The village was immediately fired and some 30 homes destroyed. "The buccaneers spared nothing but the hovel of a poor old negro woman," a witness reported. " ... every article was taken of which they could carry, the rest destroyed." A Virginia militiaman killed by grapeshot was dragged out, his pockets turned inside out and rifled. The British carried off five captured schooners brimming with hogsheads of tobacco, flour, five prisoners, a field gun, and two horses belonging to a militia commander and his son.

Kinsale was "totally destroyed," William Lambert, a former government clerk living in nearby Kilmarnock, informed Secretary of State James Monroe. The war, Lambert added with bitter sarcasm, was being carried on "with inveterate malignity" by the "humane, well-bred disciples of Admiral Cockburn."

Spreading fear was Cockburn's mission, and the sack of Kinsale had served this goal quite well. "The ruffian system of warfare carried on by the enemy, aided by such means, will light up one universal conflagration throughout these counties," Brigadier Gen. John Hungerford, the Virginia militia commander for the Northern Neck, reported Aug. 5. "Our negroes are flocking to the enemy from all quarters, which they convert into troops, vindictive and rapacious — with a most minute knowledge of every bye path," he added.

Even more pleasing to Cockburn as he wrapped up his Virginia raids was the news brought by two British frigates, freshly arrived from Bermuda, which caught up with the admiral along the Potomac August 7: Troop ships carrying 5,000 battle-hardened British Army troops were about to sail into the bay.

Captain Robert Rowley mused about the news in a letter home to England. "I suppose some grand attack will be meditated," he wrote.

A grand attack was precisely what Cockburn had in mind.