Urbanist and technology expert Anthony Townsend takes a broad, historical look at the forces that have shaped the planning and design of cities and information technologies. 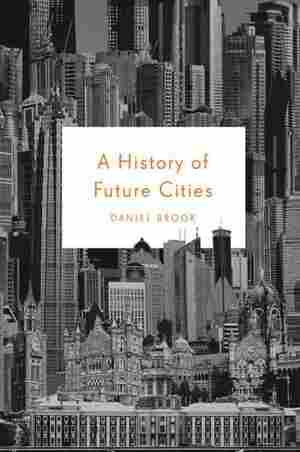 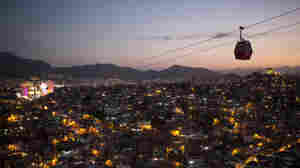 Cable cars move commuters over a complex of shantytowns in Rio de Janeiro, one of many cities taking part in the smart city boom around the world. Felipe Dana/AP hide caption

July 11, 2013 • Around the world, cities like Rio de Janeiro are using new technologies to solve their problems. And while there's great promise in many of these "smart" city programs, urban planner Anthony Townsend is wary of putting so much power in the hands of tech companies.

The first came in February when United Nations demographers predicted that within the year, the millennia-long project of settling the planet would move into its final act. "The world population will reach a landmark in 2008," they declared; "for the first time in history the urban population will equal the rural population of the world." We would give up the farm for good, and become a mostly urban species.

For thousands of years, we've migrated to cities to connect. Cities accelerate time by compressing space, and let us do more with less of both. They are where jobs, wealth, and ideas are created. They exert a powerful gravitational pull on the young and the ambitious, and we are drawn to them by the millions, in search of opportunities to work, live, and socialize with each other. While in the end it took slightly longer than the original forecast, by the spring of 2009, most likely in one of China's booming coastal cities or the swelling slums of Africa, a young migrant from the hinterlands stepped off a train or a jitney and tipped the balance between town and country forever.

Cities flourished during the twentieth century, despite humanity's best efforts to destroy them by aerial bombardment and suburban sprawl. In 1900, just 200 million people lived in cities, about one-eighth of the world's population at the time. Today, just over a century later, 3.5 billion call a city home. By 2050, United Nations projections indicate, the urban population will expand to nearly 6.5 billion. By 2100, global population could top 10 billion, and cities could be home to as many as 8 billion people.

This urban expansion is the biggest building boom humanity will ever undertake. Today, India needs to build the equivalent of a new Chicago every year to keep up with demand for urban housing. In 2001, China's announced plans to build twenty new cities each year through 2020, to accommodate an estimated 12 million migrants arriving annually from rural areas. Already largely urbanized, Brazil will instead spend the twenty-first century rebuilding its vast squatter cities, the favelas. In sub-Saharan Africa, where 62 percent of city dwellers live in slums, the urban population is projected to double in the next decade alone. Just in the developing world, it is estimated that one million people are born in or migrate to cities every single week.

The next step was to untether ourselves from the grid. In 2008, for the first time, the number of Internet users who beamed their bandwidth down over the airwaves surpassed those who piped it in over a cable. In the technical jargon of telecommunications industry statisticians, the number of mobile cellular broadband subscribers surpassed the number of fixed DSL, cable, and fiber-optic lines. This shift is being driven by the rapid spread of cheap mobile devices in the developing world, where the mobile web has already won. In India the volume of data sent across wireless networks now surpasses what's conveyed by wire.

Smartphones in hand — over a billion worldwide by 2016, according to Forrester, a market research firm — we are reorganizing our lives and our communities around mass mobile communications. Talking on the go is hardly a new idea — the first mobile phone call was placed in the United States in 1946. But it wasn't until the 1990s that personal mobility came to so dominate and define our lives and demand a telecommunications infrastructure that could keep up. By freeing us to gather where we wish, our mobiles are a catalyst for density; the most robust cellular networks are those that blanket stadiums in bandwidth so spectators can share every score by talking, texting, and photos sent to the social web. But these same networks can be a substrate for sprawl, a metropolitan nervous system conveniently connecting our cars to the cloud. They may be our most critical infrastructure, and seem to be our highest priority. Even as we struggle to find the public will to fund basic maintenance for crumbling roads and bridges, we gladly line up to hand over hard-earned cash to our wireless carriers. Flush with funds, the US wireless industry pumps some $20 billion a year into network construction. While the capital stock invested in the century — old power grid is estimated at $1 trillion in North America alone, nearly $350 billion has been spent in the last twenty-five years on the 285,000 towers that blanket American cities with wireless bandwidth.

The transition away from wires is almost complete. Mobile phones are the most successful consumer electronic device of all time. Some 6 billion are in service around the globe. Three-quarters are in the developing world. In just a few years, it will be unusual for a human being to live without one.

The final transformation of 2008 caught us by surprise. The urban inflection point and the ascendance of wireless were two trends demographers and market watchers had long seen approaching. But just as we verged on linking all of humanity to the global mobile web, we became a minority online. We'll never know what tipped the balance — perhaps a new city bus fired up its GPS tracker for the first time, or some grad students at MIT plugged their coffee pot into Facebook. But at some point the Internet of people gave way to the Internet of Things.

Today, there are at least two additional things connected to the Internet for every human being's personal device. But by 2020 we will be hopelessly outnumbered — some 50 billion networked objects will prowl the reaches of cyberspace, with a few billion humans merely mingling among them. If you think banal chatter dominates the Web today, get ready for the cacophony of billions of sensors tweeting from our pockets, the walls, and city sidewalks, reporting on minutiae of every kind: vehicle locations, room temperatures, seismic tremors, and more. By 2016, the torrent of readings generated by this Internet of Things could exceed 6 petabytes a year on our mobile networks alone (one petabyte equaling one billion gigabytes). It will drown out the entire human web — the 10 billion photos currently archived on Facebook total a mere 1.5 petabytes. Software in the service of businesses, governments, and even citizens will tap this pool of observations to understand the world, react, and predict. This "big data," as it is increasingly known, will be an immanent force that pervades and sustains our urban world.

This crowded and connected world isn't our future — we are already living in it. Comparing today's China to his first glimpses of the communist state in the 1980s, US ambassador Gary Locke captured the historic nature of this shift. "Now ... it is skyscrapers, among the tallest in the world," he told PBS talk-show host Charlie Rose on the air in early 2012. "It is phenomenal growth ... using smartphones everywhere you go. The transformation is just astounding."

But the transformation is just getting started. This book explores the intersection between urbanization and the ubiquitous digital technology that will shape our world and how we will live in it. How we guide the integration of these historic forces will, to a great extent, determine the kind of world our children's children will inhabit when they reach the other end of this century. But before we look ahead, it makes sense to look back. For this is but the last act in a drama that has played out since the beginning of civilization.