An American cop and his Kenyan partner investigate a murder tied to a hotel bombing in Nairobi that the CIA and police wrongly believe was an al-Qaida attack. Soon, they find themselves on a round-the-world pursuit for the perpetrators. 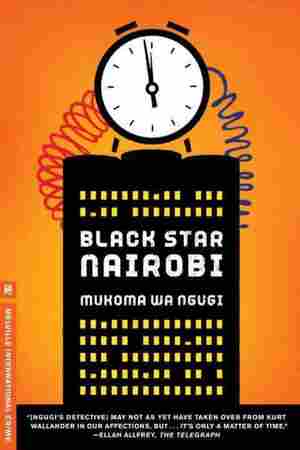 July 13, 2013 • A dead body and a hotel bombing trigger the plot of Black Star Nairobi, the latest crime novel from Kenyan-American author Mukoma Wa Ngugi. Detectives Ishmael Fofona and David Odhiambo search for the perps during the upheaval around the Kenyan elections in December 2007.

A day before the explosion at the Norfolk Hotel, O and I stood in the middle of the infamous Ngong Forest, looking at the body of what had once been a suit-wearing tall black man. Devoured by the wild animals of Ngong, the man's corpse looked more like an animal carcass. This was the worst kind of death — the victim barely resembled a human being.

It was around midday but it might as well have been midnight, with us canvassing for clues in the light of a full moon — the canopy of the ancient trees let in an annoying in-between light, too low to see well in, yet too bright for flashlights.

"This man has many secrets to tell." He pointed at the man's face — the half smile left on it suggested to me triumph at being discovered.

That was the point of Ngong Forest — a corpse left there sent a message.

In the United States, there's the Nevada desert — and football stadiums, if you count Jimmy Hoffa. In Kenya, if someone with enough credibility told you that he or she was going to send you to Ngong, you had better back down unless you could get them there first.

I hadn't been in Kenya that long, but I could rattle off names: J. M. Kariuki, a radical of this or that, tortured to death, his body discovered by a herd boy. Robert Ouko, a well-groomed politician who had allegedly committed suicide in Ngong: first, he maimed himself, and then, when he didn't bleed to death, he set himself on fire before finally shooting himself in the head. Witnesses for the prosecution and defense all died mysteriously, including the herd boy who, again, had found the body.

It was always a herd boy, venturing into the depths of the forest, who found the dead body. In our instance, he happened to have a cell phone and so we were able to get to the body in a matter of hours.

O and I should have just walked away. Add the detail that the disciplined grouping of the two shots, one through where the heart should have been and the other in the head, suggested a trained and efficient killer, and we should have run.

Had it been any other day last year, we would have. Since O and I set up what we had cleverly named the Black Star Agency three years ago, we had been working the strangest of cases: from missing penises — easy to solve with a sharp knee to the groin — to cheating spouses to rigged local council elections.

We were barely breaking even. It was only because O had never quit working for the CID that we were able to pilfer a missing-persons case here and a murder there, so we managed to stay afloat. Therefore, when Yusuf Hassan, the CID chief, threw the body at us, it was a favor. The CID would pick up the tab as well as pay me a consultancy fee.

More than just being flat broke, you could say we were like boxers who, having slugged through predictable wins, were ready to finally fight a worthy opponent. We were ready for a case like the one that nearly broke us, our first case together — the case of the dead white girl found on the porch of an African professor back in Madison, Wisconsin. Now, I'm not saying finding a missing penis is a waste of time, but sometimes, you just want to do what you do at your best, at its most challenging — not for show, but just because you are that damn good. We were hungering for real work ... and some cash.

"Whoever killed him took the casings," O said, pointing at their absence around the body.

We carefully pulled open the shredded jacket that was still wet from bodily fluids and rainwater. There were some clawed-through American dollars, a few euros, and Kenyan shillings, but no identification. His pants pockets were empty. The suit had no label. He could have been anybody. This much I knew, though: to deserve the brutality of Ngong Forest, our guy had to be somebody.

"We might never figure out who he is," I said, pointing to the barely fleshed bones that had been his hands. DNA was useful only with a large criminal database — Kenya's was in its infancy, and unless we were extremely lucky, there would be no match. And dental records? Forget about it. We just had to hope that the body would yield some secrets.

There was nothing more to do but get the body to the pathologist. We didn't have any body bags and the Administrative Police, or APs as we called them for short, had to carefully roll him onto a woolen blanket.

"Ishmael, you cannot come to Ngong Forest and not smoke a joint," O announced, looking up at the sun filtering in like moonlight.

"We're here — might as well enjoy the solitude," he added and lit up.

O hadn't changed much over the years — he still wore the same leather jacket, even on the hottest of Nairobi days. Though he was now in his early forties, he hadn't put on weight. His thin frame made him look taller than he actually was. His eyes were always bloodshot from sleepless nights and too much weed. Whenever we were in a dangerous situation, a smile that seemed to suggest he knew something the other guy did not played on his lips. It had taken me a while to figure it out — he had no limits, he could maim, torture, and kill if that was what the situation required. It was just work for him. He had seen and caused enough death to come to terms with his own mortality. Most criminals are ready to kill but not to die — when fuckers met O, he had the advantage.

It was this capacity for duality, almost like a split personality, that ultimately made him dangerous. The good guy worked in the world of nine-to-five; he was happily married and always came home at the earliest possible moment. However, when we entered the world of thieves and murderers, he fit right in and he followed their rules as often as he made and broke them. There were advantages to working with a man like O — he never lost perspective, so much so that he often seemed cold. As long as you were on the same side, you were safe. I had once admired that but lately I had begun to fear what would happen if one day whatever held his duality in place came unhinged — and I happened to be standing on the other side.

"This place, it reminds me how lucky I am — just to be alive, to be walking out of here," he said.

"Any excuse to smoke up?" I said, not believing a single word.

He laughed. "No, Ishmael, any excuse to celebrate life," and he blew the dark marijuana smoke into the forest.

It was a long mile or so to the road and, as O sank deeper into his joint, I sank deeper into my mind, listening to the forest. There are several kinds of quiet: one kind is where everything around you is quiet, another is where everything around you is in rhythm and you are not — like the quiet that comes with white noise. The quiet in Ngong Forest was the noisy kind. We were no more or less loud than the wind forcing its way through the trees, or the laughing hyenas, roaring leopards, and God knows what else; we humans just happened to be making a different sound. The sound of tearing clothes caught in the bushes, well-padded shoes rubbing and pulling against the forest undergrowth, the curse that followed bare skin catching on something thorny. It was as if we were singing out of tune in a loud band. That feeling of being all too human made me want to get the fuck out of Ngong Forest.

We finally reached the road that cut across the forest. The other two APs we had left behind to make sure ghosts and criminals didn't steal the police cars couldn't hide their relief at seeing us. They enthusiastically helped roll the body in another blanket, heaved it into the back of their pick-up, and left for the pathologist.

Naturally, O and I went to Broadway's Tavern to discuss the case over some Tusker beer and roast goat. It was how we did our best thinking.