On the Road With Led Zeppelin, Alice Cooper, and the Who in 1973, the Year the Sixties Died and the Modern Rock Star Was Born

Title
What You Want Is in the Limo
Subtitle
On the Road With Led Zeppelin, Alice Cooper, and the Who in 1973, the Year the Sixties Died and the Modern Rock Star Was Born
Author
Michael Walker

Documents the courses of three history-making tours by rock-and-roll artists The Who, Led Zeppelin, and Alice Cooper to evaluate how they significantly impacted the music industry.

NPR stories about What You Want Is in the Limo 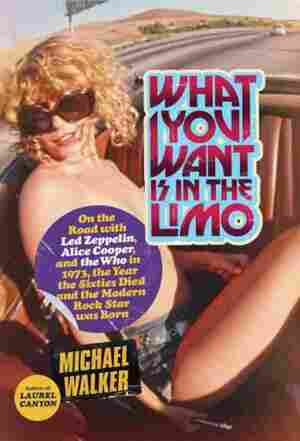 July 30, 2013 • In the new book What You Want Is in the Limo, author Michael Walker argues that a peak year in the careers of Led Zeppelin, Alice Cooper and The Who also marked a cultural shift — from the peace, love and understanding of 1960-era music to '70s rock decadence.

Excerpt: What You Want Is In The Limo

In 1973, three legendary bands embark upon tours of North America. Led Zeppelin, the Who, and Alice Cooper already rule the eight-track players in high school parking lots across America. Each band's previous album sold more than one million copies in the United States; each band is still endowed with its original lineup. And although they don't know it, in 1973 each has just released a career-defining album that will turn out to be a commercial and creative watershed: Zeppelin's Houses of the Holy, the Who's Quadrophenia, and Cooper's Billion Dollar Babies. What the bands also can't know is that their 1973 tours in support of these albums, which will collectively touch nearly every metropolitan area in the United States and Canada, represent the apogee for a certain type of rock stardom that has been building — indeed, that each of these bands has helped to build — which the world has not seen since and probably never will again.

Subsequent generations of rock musicians will literally kill themselves trying to emulate the example set in 1973, be it the attendance records smashed, the quantity and quality of drugs, the booze and groupies har- vested, the hotel rooms and vital organs ravaged or — most elusive — the evanescent aesthetic and sexual heat generated. Why? Because, in this brief and shining moment in 1973, modern rock stardom is born.

This is not to be confused with rock and roll stardom as defined by Elvis and Chuck Berry in the 1950s or by the Beatles in the 1960s. The rock star of 1973 is a new animal in every respect. The template created in 1973 will, three years later, metastasize into mega-albums by Peter Frampton and Fleetwood Mac and, in the eighties and nineties, tours upsized from civic arenas to Jumbotronned stadia and records shipped in the tens of millions. But while it lasts, the Spirit of '73 burns hot, blue, and righteous — the title of a ZZ Top classic released that summer — throughout rock and the culture beyond.

How did this moment, so estranged from the rock culture of the 1960s, arrive only four years after the supposed hippie pastoral of Woodstock? How did rock go from Beatles in tab-collar suits and fans throwing jelly babies to Led Zeppelin careering through the provinces by limo and private jet trailed by — good morning, little schoolgirl! — feral fourteen-year-olds with fake IDs? How do the same musicians who once espoused, or pretended to espouse, tie-dyed collectivism suddenly conjure a backstage culture more Weimar Berlin than Woodstock Nation? And what does this say about the popular culture of those times? Or the fact that forty years later it still makes us wonder?

The sixties created an outsize hunger for rock culture but lacked the infrastructure to deliver it; in 1973 supply finally catches up with demand. As the sixties bled into the seventies, the naïve counterculturalism that bound rock bands in generational solidarity to their audience began to fray. A new generation of fans too young for Woodstock inherited the tropes of the sixties minus the boring poli-sci socio-overlay. Thus do peace, love, and understanding devolve into sex, drugs, and rock and roll — the sex being younger, the drugs harder, and the rock and roll louder, longer, and infinitely more belligerent.

In the midst of this, the money suddenly pouring into the record industry's coffers confers upon rock bands the status of young princes. In the sixties, a convincing show of empathy with the audience was compulsory; the newly flush rockers of the early 1970s dispense with the charade and start behaving like, well, stars. Not for them the aw-shucks of Elvis, the cheek and charm of the Beatles, however feigned; no, they are rock stars — a taxonomy and work in progress that manifests in limos and Learjets and contract riders specifying vintage cognacs, which in turn feed a galloping sense of entitlement that breeds contempt for anyone not in the inner sanctum.

Into this supercharged atmosphere Led Zeppelin, Alice Cooper, and the Who launch the most ambitious tours of their careers. It is a measure of the times that the bands emerge from these voyages utterly changed. Following its '73 tour, Led Zeppelin retreats from the road for a year and a half and — 1975's semicelebrated Physical Graffiti notwithstanding — spends the rest of the seventies in a creative funk interspersed with per- sonal calamities that stoke rumors that the band is cursed before its drummer, John Bonham, dies in his sleep after downing forty ounces of vodka before and during rehearsals for a comeback tour. Emotionally and creatively spent, Alice Cooper disintegrate at the peak of their suc- cess within months of playing their last gig of 1973, on New Year's Eve in Buffalo. The Who never revisit the creative muse of Quadrophenia on record or onstage and exit the decade after a pair of desultory albums that culminate in drummer Keith Moon's death by overdose of the drug weaning him from alcohol and the tragedy of eleven fans trampled to death in a stampede at a Who concert in Cincinnati.

Like a power chord struck on a Les Paul, the electric guitar favored by Zeppelin's Jimmy Page for its endless sustain, the impact that these three 1973 albums and tours have on rock and popular culture continues to reverberate today.

The Billion Dollar Babies tour will prove especially influential: Kiss's fire-breathing theatrics, Marilyn Manson and Slipknot's calculated horror shows, Lady Gaga's self-conscious role-play — all are deeply indebted to the example Alice Cooper set in the spring and summer of 1973. Like-wise, every hair band who trashes a Days Inn , every David Lee Roth who caterwauls bare-chested and every Slash who slings a Les Paul low over his hip, owes a tip of the top hat to Robert Plant and Jimmy Page's onstage duende, perfected on Led Zeppelin's '73 tour. And every time a Bono gets a stadium full of disaffected youth shouting along to parables about Martin Luther King Jr., he can thank the Who's Quadrophenia tour for demonstrating that rock can deliver a thinking man's agenda and still crank the amps to 11.

All of which makes it essential to dust off the metaphorical coke mirror, rouse the groupie passed out in the Holiday Inn of the mind, and make sense of this chaotic, hilarious, decadent, and, it must be said, unprecedented and important year in American popular culture. Dancing days may never be here again, but it's instructive to revisit the time and place when they unquestionably are.