Joining the war effort as nurses in 1915, two spirited Australian sisters, carrying a guilty secret, become the friends they never were at home. They find themselves courageous in the face of extreme danger as they serve alongside remarkable women during the first World War.

NPR stories about The Daughters of Mars 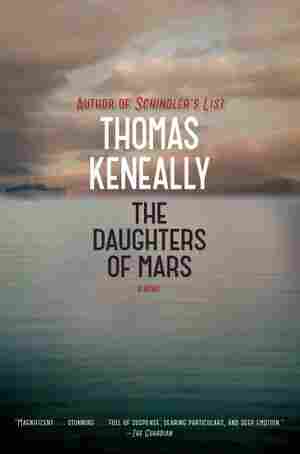 August 24, 2013 • Thomas Keneally's new novel, The Daughters of Mars, follows two Australian sisters who become nurses during World War I. Naomi and Sally Durance share a guilty secret, but they don't share any sisterly closeness — until the horrors of war begin to bind them together.

August 20, 2013 • Thomas Kenneally's new novel, The Daughters of Mars, follows two Australian sisters who become nurses in World War I. Reviewer Jean Zimmerman says the book is "the work of a master storyteller, sharing a tale that is simultaneously sprawling and intimate."

Excerpt: The Daughters Of Mars

For six months Mrs. Durance ate her fruit and sat in sumps of sunlight on the veranda. But the cancer owned her by night. Sally still worked the day shift at Macleay District but now slept on call in the same room as her mother, her father having moved to a lean-to at the back of the homestead. Sally was to administer a sixth of a grain of morphine hypodermically when brave and reticent Mrs. Durance confessed, one way or another, to agony. Naomi took her holidays and came home on a visit and gave her sister a break from the regimen. In between, Mr. Durance paid their neighbor Mrs. Sorley's girl to sit with Mrs. Durance by day and was attentive himself. Since Mr. Sorley had been killed by a native cedar — which when cut had slipped sidewards rather than forwards — the Sorley kids were ever ready for employment.

Sally noticed more clearly now that though her father and mother were souls of decency, Eric Durance moved about the bedroom as if he and his wife were acquaintances only. He seemed to fear he might be seen as an intruder. There had always been that distant courtesy between her parents. Sally knew they'd infected Naomi and her with it too. It might be one of the reasons Naomi had cleared out — in the hope that on a different stage she might have a franker soul.

Mrs. Durance suffered so much night pain that she frequently told Sally she was praying to God for death. These were remarkable and dramatic things for her to say and — since she had always had contempt for overstatement — would be forced out of her only by the fiercest anguish.

In the seventh month of it, Naomi came back from Sydney again to sit with her mother by day and share the night watch. The second night she was home, Sally slept in her own room while Naomi took up post in Mrs. Durance's room on the camp cot, a surface of canvas no blanket could soften. Naomi was meant to wake Sally at four so that she could take over, but did not come rapping on her door till near dawn. Naomi was in a dress and boots and her eyes looked smeared after gales of tears.

Mama's gone, she said. I'm sorry, Mama's gone. I ran over to the Sorleys' and asked their boy to ride into town to get Dr. Maddox.

Sally stammered with a confused and bitter grief and went to go off at once down the hallway. Naomi took her shoulders and gazed at her, straight into her face. Naomi's eyes seemed full of conspiracy. To Sally she had the eyes of a co-murderer. At that instant their shared mercy and their crime drew them together so utterly that they were no longer city and country nurses but sisters once more of the same womb.

You didn't wake me for my shift, said Sally.

It wasn't necessary, Naomi asserted, frankly, with her gaze on her.

She went before it was time to wake you.

Let me see her.

I washed her and laid her out.

I wanted you to sleep. I burned her nightdresses and the rags she used and took all the tonics and pounded the bottles to dust. Especially that rhubarb concoction Mrs. Sorley swore by.

There was indeed still a taint of smoke in the air.

Naomi led her sister by the hand and they walked down the hallway to the plain room they had both been conceived in. Blackbutt walls hemmed in the dim corridors they loved and hated, which seemed to pull Sally closer to home but which had proved to be escape avenues for Naomi.

There was her mother — gray-faced, prepared, serene — the girl she had been at some time visible again in these features delivered of pain.

Sally heard herself howl and went to her mother's body, kissing the face. The skin of the dead yielded differently. They were beyond pain but past affection too. She kissed the hand. It smelled of the scented soap Naomi had washed the corpse with. This too was proof of death. The living mother smelled of workaday Sunlight soap.

Sally found herself on her knees, still caressing the hand, Naomi standing behind and above her. Naomi, who always presumed to do things first. Sally did not know whether to hate her, to attack her eyes, or fall flat in gratitude and wonder. Standing with a purpose in mind, she noticed the hypodermic needle, the morphine solution they had made up of pills actually prescribed by Dr. Maddox, and the unused bottled tablets in case the old doctor wanted to inspect them or return them to stock.

She went to the dresser, was poleaxed with loss by the mother-of pearl hairbrush with strands of her mother's hair in it. She knew the little drawer where her mother kept her subdued pink lipstick and her beige face powder.

Yes, said Naomi, you should put some color on her poor face.

It was a prayer — not an order — and Sally set to.

The stolen reserve of morphine she had put together to finish her mother had been in the towel and linen cupboard in the hallway. How had Naomi found it? You could bet the solution Naomi had made up and injected for mercy's sake had been poured out, and the spare illicit tablets Sally had filched from Macleay District consigned to fire with the rhubarb tonic. To Sally — putting rouge and color into her mother's cheeks — it seemed knowledge grew between Naomi and her without them looking at each other. Yesterday they had been near strangers. Now they were altered. A different kind of reserve was imposed on them, and a different intimacy.

Is Papa up? Sally asked. Does he know?

Not yet. I was frightened. Will we tell him in a moment? Perhaps let the poor fellow rest a few more minutes.

For he would need to do the milking even on the morning of his wife's death.

But she finds it hard to face him, Sally perceived. Naomi — who had tried to avoid the weight of home and its taint of illness — had certainly assumed the weight now. She'd taken up station on the far side of the bed, across from where Sally, on her knees, put reasonable Methodist coloration on the poor, released features.

Naomi said, I didn't have any idea till I came home that it was as bad as that. Her pain was the whole world to her. She could see nothing but it. Well, not any longer.

Sally was engrossed with her mother.

It was easy, Mama, to steal what you needed. I cut out two pages from the drugs record book. Former nurses who had managed the drugs register had done similar excisions because they did not approve of some missed or untidily written entry. Then for your dear sake I copied the dosages on fresh pages, adding an extra dose of an eighth of a grain of morphine in this case and that, until I'd created a phantom two grains, which I then fetched from the drugs cabinet and brought home to you. It's unlikely a doctor or matron will remember a specific dose as months go by. But I don't care if they do.

She had kept the tablets hidden behind the bed linen in the hallway dresser. These two grains when mixed in solution and injected would bear away disease and the fuss of enduring all useless treatment. They would reach deep into the body and halt the mechanism of agony. And had now.

She kissed her mother's brow before gracing it with the powder. Eric Durance would be astonished by his wife's beauty in death.

Naomi declared, I gave her half a grain and we kissed and held hands, though I had to be careful — a touch would break her bones. Then she went.

You were standing over her? said Sally.

They both knew how rare it was that a patient expired while the nurse was standing there to observe and hold a hand. The dead went almost secretively.

Again, Sally's astonishment that Naomi had done the right, fierce, loving, and hard thing Sally had meant to do! Even in this she was not to be outshone, the half-mad Sally thought. But Naomi was there because she had found the secret cache and took the burden of soothing her mother's breath down to nothing. A solemn loss and rejoicing were the day's order — Mama's freedom now from a world she had never since their babyhoods seemed accustomed to. As for her children, they must now get accustomed to something new. To new love and new hate and mutual shame.