The Rituals of Love & Karaoke

After his wife's death, a Rolling Stone writer finds solace in music. Embracing his past and looking to his future, he find the courage to begin again ... by singing off-key in front of strangers. 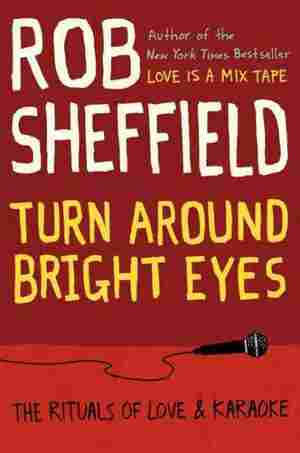 August 4, 2013 • Rob Sheffield had his life pulled out from him 16 years ago when his wife died suddenly of a pulmonary embolism. He overcame his grief through singing karaoke, and tells about it in his new book, "Turn Around Bright Eyes: The Rituals of Love and Karaoke."

Once upon a time I was falling apart. Now I'm always falling in love.

By "now" I mean Saturday night, in one of the sleazy karaoke bars where I always seem to wind up. It's me and my wife, somewhere in New York City. We're here to sing the night away. It's just after eight, early enough to beat the midnight crowds, too late to talk ourselves out of what lies ahead. We're not going home before we get a few songs in. And we're not getting up on time tomorrow. Sometimes we drag some innocent bystanders along. Tonight it's just us.

Either way, we always come here for a fix of that transcendent experience we can only get from singing. The electric frazzle in the voices, the crackle of the microphones, the smell of sweat, mildew, vodka, and pheromones — the full karaoke experience. Tonight we are setting out to belt some of our favorite songs. We'll do songs we've never tried before. We'll take on duets we haven't sung together. And we'll do the standards we always have to do. But when you take that karaoke microphone in your hand, you don't know what kind of adventure you're stepping into. So you just have to surrender and let the song take over. You start to sing karaoke, and some kind of psychic heart-switch flips. If you're lucky, and the beer doesn't run out, it's more than just a night of debauchery. It's a spiritual quest.

Welcome to Sing Sing, our beloved karaoke den on Avenue A. Ally and I cherish this spot because it has everything you want in a karaoke place: great songbook, private rooms, surly bartenders, cheap drinks. Every time we head over to Sing Sing, I get that thrill of anticipation as we pad down Avenue A. As soon as I see that red awning over the door, even from a few blocks away, the adrenaline starts to flow. The awning has the classic yin-and-yang symbol of the Tao. Except it's at the center of a microphone.

From the sidewalk outside, Sing Sing looks like any other karaoke bar. There's always a picture of a microphone outside. There's a door guy checking drivers' licenses, probably wishing he could be the door guy somewhere swankier, maybe a club where they have a velvet rope and a strict no-Journey policy. Inside, it's dim fluorescent lights and red walls. The customers perch on their bar stools, just a few notes away from crashing to the floor. There's usually a bartender. And there are always songs. That's why we're here.

I love the crowd at Sing Sing. It's part of the show. You can always hear rockers and rappers and disco cowgirls and smoothed-out crooners. Despite the early hour, there's already a bachelorette party full of blitzed bridesmaids teetering on their heels, ready to start splashing their Disaronno-and-Sprite on everyone. There are some lurkers in the shadows, too wasted to remember whose birthday they came here to celebrate. Maybe none of us can sing on key, but nobody minds. We're not here to judge, right? Nobody's here because they're a great singer. We came because we want to be stars for a night.

Some places have a stage; other places you sing at the bar or grab a table. One of the reasons we love Sing Sing is they have the private rooms, which is definitely the way we want to go tonight. If you get there soon after 8 p.m., you can usually score one, but by ten, you'll get stuck on the waiting list.

Karaoke has lots of rituals. The first, naturally, is showing up. The second: Ally and I check in at the front desk to get our room. It's eight dollars an hour per person for the room, or two dollars per song if you sit at the bar. But it's cheaper to rent the room, which means you stay later and sing more. You can sign up for a specified time, or you can sing until the bartenders throw you out at closing time. I can already tell tonight is going to be the second kind. But hey — it's Saturday night, so I guess that makes it all right.

The karaoke host leads us down the hall. I get that familiar tingle as we head downstairs, across the black and white tiles, under the flickering bulbs associated with prison movies or Ministry videos. Sing Sing has a few dozen rooms in the basement — it's a labyrinth down there. Ally and I have sung in every one of those rooms by now. The host turns on the karaoke machine and makes sure the remote control works. The TV screen has the lyrics and the goofy karaoke videos. There's also a buzzer on the wall we can press to order more drinks.

This room was obviously decorated by a color-blind stripper in 1982. It's halfway between "suburban rec room" and "motel meth lab." The couch has been jumped on by so many wasted girls over the years, you know it's indestructible. And the day it gets vacuumed will be the day Buddy Holly shows up to sing "Peggy Sue" for you in person. If you're Catholic, this room might remind you of a confessional. But no, the rooms are never pretty. Why should they be? The owners know why you keep coming back here, and it's not the decor. It's that raw, primal need.

There's never a clock, never a window. It's just like a casino where they want to keep the suckers playing as long as possible. After a few songs, you'll have no idea how long you've been singing, or how much longer you can last. If you've ordered a few rounds, you can use the empties to measure how long you've been there.

Down in the karaoke room, the first order of business is to grab yourself a songbook. They're fat binders, the size of cinder blocks. Some of the books might be soggy from the previous occupants' spilled cocktails. Others might smell funkier than the couch. The pages are laminated, which might have to do with the amount of human bodily fluids that get splattered on them. But I've flipped through every page of this book with love and reverence. For some of our favorite tunes, we don't even have to look up the number. "Ziggy Stardust," that's 117718. (The version without the video. It's always better without the video.) Those magic numbers are fried onto my brain. I mean, I couldn't tell you my blood pressure right now, but I can tell you my favorite Aaliyah song is 119283.

Ally and I already know our first song tonight. She just takes the remote and punches in 117498. That's "Total Eclipse of the Heart." Everybody has their warm-up song, their go-to jam, the one that gets the blood pumping. This one is ours. For all karaoke freaks around the nation, "Total Eclipse of the Heart" is one of those sacred anthems. It's the kind of song that announces, "Dearly beloved, we have so totally gathered here today." It's the entrance antiphon of the ceremony.

But for Ally and me, it's the first duet we ever sang, ten years ago, right after we met. Our first karaoke date was a Lower East Side loft party. (Certain friends of mine still remember this as "liquid mescaline night.") The place was thick with clubsters and models and writers, plus a couple of karaoke hosts, Sid and Buddy, dressed up as their favorite dead rock stars. Ally and I made our debut with "Total Eclipse of the Heart." The piano intro began and we took up our mikes. Ally took the hard part, i.e., the half of the song that has several million words crammed in there. Me, I took the easy part. I began to sing the mantra: "Turn around."

It's funny — ten years ago, this song was just another eighties oldie to me. I probably heard it all the time, yet never noticed it. I figured I already knew it. But I had never sung it with this woman. And after that, it was a whole new song. Turn around. So I hear it now and it reminds me of this woman I love. It's just one of the many insane adventures we stumbled into together. Turn around. No matter how many times I hear it, the song will always flood me with memories of all the times we've sung it. Next time I hear it, tonight might be one of those memories. Turn around.

The song always starts the same way. Those same four piano notes, over and over. But I can already tell this is just the first shot of a marathon epic karaoke quest. I don't care how late we have to stay to get our fix. We will torch one great song after another, until they pull the plug and kill the lights and beg us to go home. Turn around.

One long night of karaoke, looping the clock around. And forever's gonna start tonight.