by Louisa Shafia and Sara Remington

A sumptuous primer on the seasonal cuisine of Iran features dozens of recipes for traditional and modern dishes, demystifying unfamiliar ingredients while sharing healthy adaptations of such classic favorites as Jeweled Rice, Pomegranate Soup and Saffron Ice Cream. 10,000 first printing. 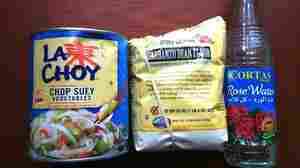 Pomegranate Molasses Could Be Your Secret Weapon

September 2, 2013 • Cook Your Cupboard an ongoing food series about working with what you have on hand — like chickpea flour, rose water and pomegranate molasses.

Pomegranate Molasses Could Be Your Secret Weapon 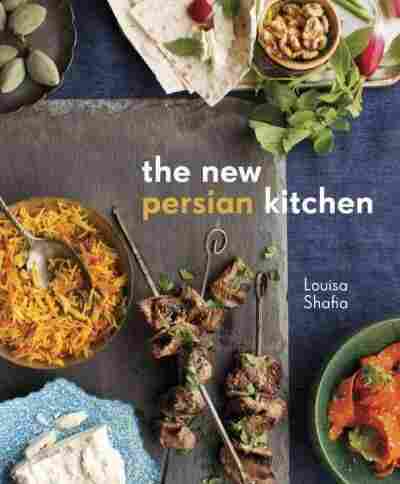 
I saw a garden pure as paradise . . .
A myriad different hues were mingled there
A myriad scents drenched miles of perfumed air
The rose lay in the hyacinth’s embrace
The jasmine nuzzled the carnation’s face


Imagine that you are in a vast desert with the hot sun searing your back. A high stone wall with an elaborate gate appears, and you walk through it. Suddenly you feel cool air on your skin and hear the soft melody of water dancing in a fountain. You are in a lush, blooming garden, and a deep breath brings the honeyed fragrance of roses to your nose. All around you are fruiting trees of pistachios, almonds, walnuts, peaches, apples, pears, sour cherries, and pomegranates. From the ground rise neat rows of squash, cucumber, carrot, eggplant, garlic, and rhubarb. A patch of purple crocus reveals three red saffron stigmas sprouting from each dewy flower, while the scent of limes, turmeric, cardamom, and mint fill the air.

I’m often asked, “So, what exactly is Persian food?” The best way I can think of to describe it is as a lush garden in the desert, a familiar image from classical Persian lore. Like our mythical garden, Persian cuisine is perfumed with the floral scents of citrus, rose water, and quince. Indeed, fresh and dried fruits feature in meat, rice, and desserts alike, while ingredients such as pomegranates, saffron, and pistachios are called on as much for their taste as for their striking appearance, which evokes the colors of nature. Why a desert garden? Through a system of underground aquifers, ancient Persians transformed vast stretches of arid land into fertile oases, and over thousands of years, the miracle of water in such unlikely places led to a cuisine that relishes the gifts of the garden in every bite. The New Persian Kitchen takes this reverence for fresh food as its starting point, drawing on traditional Persian ingredients and health-conscious cooking techniques, to create a new Persian cuisine that’s part contemporary America and part ancient Iran.

The journey of writing this book began a dozen years ago at my first cooking job, at San Francisco’s vegan Millennium restaurant, when head chef Eric Tucker asked me to come up with a new entrée. Out of the blue, my first idea was to make the classic Persian dish fesenjan, a sweet and tart stew of pomegranate molasses, ground walnuts, and seared chicken or duck. I crafted a meatless version of the dish and enhanced the color with grated red beets. To my delight, the chef and kitchen staff received my creation enthusiastically, and the dish made it onto the menu. Though my father comes from Iran, and I had grown up eating dishes like fesenjan, I had simply never given much thought to Persian cooking. Happily, that little push would jump-start my exploration into the food of Iran, and ultimately, into my own Persian heritage.

I grew up in a leafy neighborhood in Philadelphia in the 1970s, a time and place in culinary history marked by a growing enthusiasm for natural foods, contrasting obsessions with Chinese home cooking and Julia Child, and the onset of the “quick weeknight dinner”—a boon to working moms in the form of Ortega tacos, frozen pizza, and canned soup. Our home was influenced by all of these trends, but with a notable difference: there was an otherworldly Persian element in the form of red eggplant stew spiced with pomegranate molasses; fluffy saffron rice; succulent lamb kebabs pulled from hot metal skewers with reams of pillowy flatbread; and a love of fresh fruits like watermelon, oranges, and grapes, all owing to my father’s Iranian heritage.

My mother, an Ashkenazi Jew who was born and raised in suburban Philadelphia, and my father, the product of a large Muslim family in Tehran, met while my mom was working as a librarian at the hospital where my dad was an intern. He was late returning books; she called to remind him, and the rest is history. Although my dad had no relatives in the States, and few Persian friends, we did attend grand Norooz (Persian New Year) banquets and dinners at the homes of my dad’s Persian colleagues. There were also rare visits from our family in Iran, when my dad’s sister, my beautiful Aunt Meliheh, would spend days in our kitchen making a feast worthy of Cyrus the Great. Through these experiences, and my mom’s impressive attempts to re-create the food of my dad’s homeland, the tastes and smells of Persian food were imprinted on my senses.

In the years since, as a culinary professional, I’ve been drawn to fresh food and healthful cooking, and I’ve prepared everything from raw to vegan to high-end Swedish food at restaurants in New York and San Francisco. Over time, the allure of my Iranian ancestry has grown stronger, and my passion for produce-centered cooking has been increasingly colored by childhood memories of burbling Persian stews and steaming pyramids of rice. The New Persian Kitchen represents the synthesis of those influences and my experience in contemporary cooking.

Obscured for years by a veil of political animosity, Persian food is a global treasure waiting to be discovered. Poised between East and West, Iran boasts a remarkable history that stretches back at least three millennia. Crisscrossed for centuries by intercontinental traders, and at one time extending from North Africa to the Hindu Kush, the Persian Empire was subjugated by both neighboring countries and distant rivals. These many outside influences resulted in a cuisine seasoned by Greeks, Romans, Arabs, Mongols, Turks, Africans, Indians, Chinese, and even Britons and the French. Yet even while embracing new flavors, Persian food has retained its startlingly unique fundamental character.

With the recipes in the following pages, I aim for a similar blending of the foreign and the familiar. Indeed, about half of these recipes are original creations that explore Persian ingredients and cooking techniques in fresh, new ways, while the other half are time-honored dishes that correspond closely enough to the originals to merit including their Persian names.

In general, you’ll find that the recipes here emphasize whole grains and gluten-free flours, use minimal amounts of oil and fat, and call for alternatives to white sugar. For readers who want to make the meat dishes without the meat, many of the recipes include a suggestion for how to adapt them to a vegetarian diet.
For kosher cooks looking to avoid mixing meat and dairy, the main dairy ingredient to be aware of in Persian food is yogurt, which is used as an accompaniment to most entrées, and is sometimes cooked right into a dish. Where it’s called for in a meat dish, simply leave the yogurt out. Fresh lemon or lime juice, olive oil, or a combination of oil and citrus makes a great substitute. Finally, since Persian cuisine may be unfamiliar to many readers, I’ve suggested a variety of seasonal menus (see page 186).

My Persian grandfather Yousef was a devoted practitioner of alchemy, the mysterious and ancient science of turning base metals into gold. I’d like to think that his zeal for transformation was handed down to me and manifests in my passion for turning raw ingredients into substances even more delectable and refined than they were in their original form. In the Persian kitchen, our tools are fire and spice, and the secret ingredient is love. With that in mind, I invite you to turn eastward and join me on this adventure into the fairy-tale spices and fantastical fruits of a timeless cuisine. With a warm reverence for the past, and a firm foothold in the present, we’ll create our own kitchen alchemy, transmuting fresh ingredients into dazzling feasts.

1. Heat a small skillet over medium-high heat. When hot, add the sesame seeds and alternate between shaking the pan and stirring the seeds. When the seeds start to pop, after a couple of minutes, transfer them to a plate and let cool to room temperature.

2. In a small bowl, whisk together the garlic, vinegars, honey, sesame oil, red pepper flakes, sesame seeds, and 1 teaspoon salt. Pour the dressing over the carrots, add the cilantro, and toss well. Season to taste with salt and serve.