Accessibility links
Cat Sense NPR coverage of Cat Sense: How the New Feline Science Can Make You a Better Friend to Your Pet by John Bradshaw. News, author interviews, critics' picks and more.

Anthrozoologist John Bradshaw, and the author of Dog Sense, draws on the latest scientific and behavioral research to explain the origins, evolution and modern-day needs of domestic cats, revealing how an understanding of a cat's ancient instincts is an essential part of a healthy cat-human relationship. 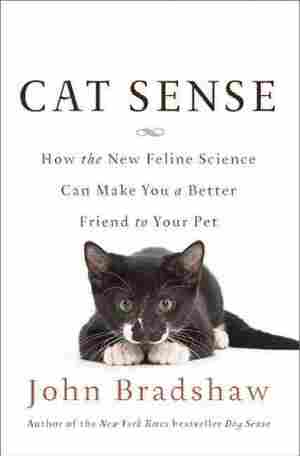 September 5, 2013 • Kitties don't play — they hunt. And their aloof appearance has evolutionary roots. A new book explains cats' mysterious nature and how their relationship with humans has changed over the years.

Cats have fascinated me since I was a child. We had no cats at home when I was growing up, nor did any of our neighbors. The only cats I knew lived on the farm down the lane, and they weren't pets, they were mousers. My brother and I would occasionally catch intriguing glimpses of one of them running from barn to outhouse, but they were busy animals and not over-friendly to people, especially small boys. Once, the farmer showed us a nest of kittens among the hay bales, but he made no special effort to tame them: they were simply his insurance against vermin. At that age, I thought that cats were just another farm animal, like the chickens that pecked around the yard or the cows that were driven back to the barn every evening for milking.

The first pet cat I ever got to know was the polar opposite of these farm cats, a neurotic Burmese by the name of Kelly. Kelly belonged to a friend of my mother's who had bouts of illness, and no neighbor to feed her cat while she was hospitalized. Kelly boarded with us; he could not be let out in case he tried to run back home, he yowled incessantly, he would eat only boiled cod, and he was evidently used to receiving the undivided attention of his besotted owner. While he was with us, he spent most of his time hiding behind the couch, but within a few seconds of the telephone ringing, he would emerge, make sure that my mother's attention was occupied by the person on the other end of the line, and then sink his long Burmese canines deep into her calf. Regular callers became accustomed to the idea that twenty seconds in, the conversation would be interrupted by a scream and then a muttered curse. Understandably, none of us became particularly fond of Kelly, and we were always relieved when it was time for him to head back home.

Not until I had pets of my own did I begin to appreciate the pleasures of living with a normal cat — that is to say, a cat that purrs when it is stroked and greets people by rubbing around their legs. These qualities were probably also appreciated by the first people to give houseroom to cats thousands of years ago; such displays of affection are also the hallmark of tamed individuals of the African wildcat, the domestic cat's indirect ancestor. The emphasis placed on these qualities has gradually increased over the centuries. While most of today's cat owners value them for their affection above all else, for most of their history, domestic cats have had to earn their keep as controllers of mice and rats.

As my experience with domestic cats grew, so did my appreciation of their utilitarian origins. Splodge, the fluffy black-and-white kitten we bought for our daughter as compensation for having to relocate, quickly grew into a large, shaggy, and rather bad-tempered hunter. Unlike many cats, he was fearless in the face of a rat, even an adult. He soon learned that depositing a rat carcass on our kitchen floor for us to find when we came downstairs for breakfast was not appreciated, and after that he kept his predatory activities private — without, I suspect, giving the rats themselves any respite.

However brave he was against a rat, Splodge usually kept away from other cats. Every now and then, we would hear the cat-flap clatter as he arrived home in a tearing hurry, and a quick glance out the window would usually reveal one of the older cats in the neighborhood, glaring in the general direction of our back door. He had a favorite hunting area in the park nearby, but kept himself inconspicuous when traveling there and back. His diffidence toward other cats, especially males, was not just typical of many cats; it also exemplified a weakness in social skills that is perhaps the greatest difference between cats and dogs. Most dogs find it easy to get along with other dogs; cats generally find other cats a challenge. Yet many of today's owners expect their cats to accept other cats without question — either when they themselves wish to get a second cat, or when they decide to move, depositing their unsuspecting cat into what another cat thinks is its territory.

For cats, a stable social environment is not enough; they rely on their owners to provide a stable physical environment as well. Cats are fundamentally territorial animals that put down powerful roots in their surroundings. For some, their owner's home is all the territory they need. Lucy, another of my cats, showed no interest in hunting, despite being Splodge's great-niece; she barely strayed more than a dozen yards from the house — except when she came into season and disappeared over the garden wall for hours on end. Libby, Lucy's daughter and born in my home, was as brave a hunter as Splodge had been, but preferred to call the tomcats to her rather than go to them. Even though they were all related and all lived in the same house most of their lives, Splodge, Lucy, and Libby all had distinctive personalities, and if I learned one thing from observing them it was that no cat is completely typical: cats have personalities, just as humans do. This observation inspired me to study how such differences come about.

The transformation of the cat from resident exterminator to companion cohabiter is both recent and rapid, and — especially from the cat's perspective — evidently incomplete. Today's owners demand a different set of qualities from their cats than would have been the norm even a century ago. In some ways, cats are struggling with their newfound popularity. Most owners would prefer that their cats did not kill cute little birds and mice, and those people who are more interested in wildlife than in pets are becoming increasingly vocal in their opposition to the cat's predatory urges. Indeed, cats now probably face more hostility than at any time in the past two centuries. Can cats possibly shake off their legacy as humankind's vermin exterminator of choice, and in just a few generations?

Cats themselves are oblivious to the controversy caused by their predatory natures, but all too aware of the difficulties they encounter in their dealings with other cats. Their independence, the quality that makes cats the ideal low-maintenance pet, probably stems from their solitary origins, but it has left them poorly equipped to cope with many owners' assumptions that they should be as adaptable as dogs. Can cats become more flexible in their social needs, so that they are unfazed by the proximity of other cats, without compromising their unique appeal?

One of my reasons for writing this book is to project what the typical cat might be like fifty years from now. I want people to continue to enjoy the company of a delightful animal, but I'm not sure that the cat, as a species, is heading in the right direction. The more I've studied cats, from the wildest feral to the most cosseted Siamese, the more I've become convinced that we can no longer afford to take cats for granted: a more considered approach to cat keeping and cat breeding is necessary if we are to ensure their future.

Excerpted with permission from Cat Sense: How the New Feline Science Can Make You a Better Friend to Your Pet, by John Bradshaw. Available from Basic Books, a member of The Perseus Books Group. Copyright 2013.