Accessibility links
I Don't Know NPR coverage of I Don't Know: In Praise of Admitting Ignorance (Except When You Shouldn't) by Leah Hager Cohen. News, author interviews, critics' picks and more.

In Praise of Admitting Ignorance (Except When You Shouldn't)

Leah Hager Cohen advocates for honoring doubt and admitting when the answer is "I don't know," considering the ramifications of admitting ignorance and how it can increase the possibility for true communication.

NPR stories about I Don't Know 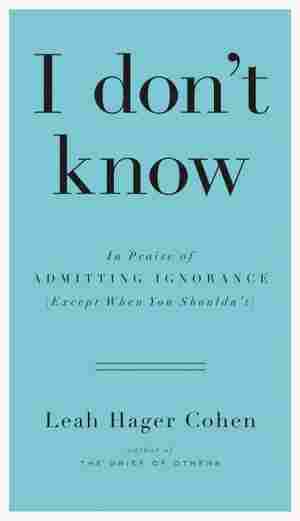 September 18, 2013 • Author Leah Hager Cohen says it's time to stop faking your way through conversations. "Once you finally own up to what you don't know, then you can begin to have honest interactions with the people around you," she explains.

Let's look at the prison piece," said the professor. "What does the nut graph tell us?"

Around me rose a soft rustle as other students rifled knowledgeably through the photocopied news stories we'd been given at the start of class. I found the article on inmate crowding, but as I turned its pages, failed to spot anything that might fit the professor's specification. I looked at first for something acorn-shaped, then for anything vaguely pictorial, but could find no pie chart, no bar graph, no pyramid diagram — nary an illustration in the entire piece. I glanced around. Everyone else seemed to have managed the task; they sat absorbedly regarding their copies of the article while the professor continued, parsing the information apparently contained within this elusive "nut graph." What page were they all on? I strained to see, but couldn't get an angle. How distinctly I remember growing damp then, my skin flocked with sweat.

I was twenty-two and in my first week of graduate school in journalism. I knew by their appearances that most of my classmates were older, just as I knew from the school's brochure, which promised to provide journalists "a unique opportunity to hone and deepen their skills at any point in their careers," that many of them already had experience working in the field, whereas I had never so much as written for my college newspaper. But until the moment I searched in vain for the devilish little entity called a nut graph, I'd been more thrilled than cowed, eagerly optimistic about joining their ranks.

Now I sat awash in shame. It wasn't the shame of incompetence so much as the shame of hubris. To think I had dared imagine I could be a journalist! I couldn't even keep up with the class in the very first week of instruction.

Did I raise my hand to ask for help? Turn to a neighbor with whispered appeal?

I did not. The cost felt too great. To confess my ignorance would be to expose my inadequacy; I would be cast off, dismissed from this world to which I craved entry. Such was my fear, and it was powerful enough to make stewing in the solitary confinement of my shame seem a preferable alternative.

In time I would learn that "nut graph" is, in fact, "nut graf" (graf being journalism slang for paragraph) and refers to that part of an article, usually following the lead, that gives a condensed overview of its news value. In time I would discover that I was, after all, up to the task of successfully completing the course of study. In time, as I incrementally proved my worth to myself and others, I would even find the courage to speak up, on occasion, when I came across something I did not understand.

But the memory of that first class more than two decades ago remains uncomfortably sharp. Its residue of fear and shame has never entirely dissipated. And I still sometimes struggle with saying "I don't know."

Fakery is a vital currency in our social intercourse. That's not necessarily all bad. A lot of the time we pretend as a way of fortifying or easing connections. When we feign recognition, for example, or delight in seeing someone, or gladness to go out of our way, these are acts of goodwill. At best, pretense can be a form of kindness.

But the benign desire to spare ourselves and others embarrassment or disappointment or pain can lead to actions that engender greater falsehood, promulgate more fear. How easily we fall into the pattern of using deception as a shield against feeling uncomfortable. At worst, it can breed a habit of shirking responsibility and avoiding vulnerability — behaviors that ultimately distance us from the very prizes we crave: true connection with others and integrity within ourselves.

This book looks at two kinds of pretending: pretending to know stuff we don't, and pretending not to know stuff we do — for just as we might avoid saying "I don't know" for fear of being ridiculed or rejected, the flip can also be true: Sometimes we pretend ignorance of things we think might lower our cachet, whether to prove our membership in highbrow culture ("What's a Kardashian?") or to accommodate social pressures (as so many women of my mother's generation were warned, "Boys aren't attracted to smart girls").

This book also looks at two kinds of fear: fear of estrangement and fear of stepping into the abyss — for as much as we might worry that saying "I don't know" could cost us the human company we desire, evict us from our place around the hearth, there's an even more primal fear associated with not knowing: that our inability to comprehend the universe might threaten our very survival. Our efforts to compensate for both social and psychic fears manifest in some pretty interesting ways.