A dual portrait of the powerful Cold War Secretary of State and his equally influential brother, the director of the CIA, this book places their lives and accomplishments against the history of their time to offer insight into how they shaped modern beliefs and America's international role.

NPR stories about The Brothers 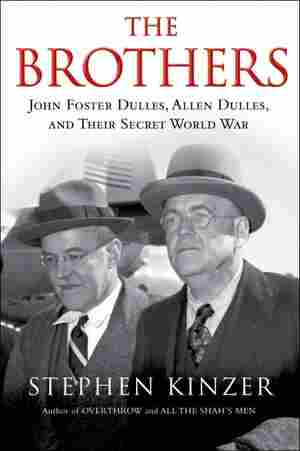 October 16, 2013 • In 1953, President Dwight Eisenhower appointed John Foster Dulles as secretary of state, and Allen Dulles as director of the CIA. In his new book, The Brothers, journalist Stephen Kinzer says the Dulles' actions "helped set off some of the world's most profound long-term crises."

September 29, 2013 • Sharing power in the Eisenhower administration, John Foster Dulles and Allen Dulles were the forefathers of using covert operations to upset foreign governments. Journalist Stephen Kinzer, who wrote a book on the siblings, says Americans are still paying the price for them.

When John Foster Dulles died on May 24, 1959, a bereft nation mourned more intensely than it had since the death of Franklin Roosevelt fourteen years before. Thousands lined up outside the National Cathedral in Washington to pass by his bier. Dignitaries from around the world, led by Chancellor Konrad Adenauer of West Germany and President Chiang Kai-shek of Taiwan, came to the funeral. It was broadcast live on the ABC and CBS television networks. Many who watched agreed that the world had lost, as President Eisenhower said in his eulogy, "one of the truly great men of our time."

Two months later, Eisenhower signed an executive order decreeing that in tribute to this towering figure, the new super-airport being built at Chantilly, Virginia, would be named Dulles International.

Enthusiasm for this idea waned after Eisenhower left the White House in 1961. The new president, John F. Kennedy, did not want to name an ultra-modern piece of America's future after a crusty Cold War militant. As the airport neared completion, the chairman of the Federal Aviation Authority announced that it would be named Chantilly International. He left open the possibility that a terminal might be named for Dulles.

That sent partisans into action. One of them was Dulles's brother, Allen, who had run the Central Intelligence Agency for nearly a decade. Pressure on Kennedy grew, and he finally relented. On November 17, 1962, with both Eisenhower and Allen Dulles watching, he presided over the official opening of Dulles International Airport.

"How appropriate it is that this should be named after Secretary Dulles," Kennedy said in his speech. "He was a member of an extraordinary family: his brother, Allen Dulles, who served in a great many administrations, stretching back, I believe, to President Hoover, all the way to this one; John Foster Dulles, who at the age of 19 was, rather strangely, the secretary to the Chinese delegation to The Hague, and who served nearly every Presidential administration from that time forward to his death in 1959; their uncle, who was secretary of state, Mr. Lansing; their grandfather, who was secretary of state, Mr. Foster. I know of few families and certainly few contemporaries who rendered more distinguished and dedicated service to their country."

Then, in what became a newsreel clip seen around the world, Kennedy pulled back a curtain and unveiled the airport's symbolic centerpiece: a larger- than- life bust of John Foster Dulles. It was on a pedestal overlooking an evocative reflecting pool at the center of the airport that the architect, Eero Saarinen, hoped would calm travelers' turbulent spirits.

Half a century after Dulles's death stunned Americans, few remember him. Many associate his name with an airport and nothing more. Even his bust has disappeared.

During renovations in the 1990s, the reflecting pool at Dulles International Airport was filled. The bust was removed. When the renovation was complete, it did not reappear. No one seemed to notice.

After several fruitless inquiries, I finally tracked down the bust. A woman who works for the Metropolitan Washington Airports Authority arranged for me to view it. It stands in a private conference room opposite Baggage Claim Carousel #3. Beside it are plaques thanking the Airports Authority for sponsoring local golf tournaments. Dulles looks big-eyed and oddly diffident, anything but heroic.

Dedicated by the president of the United States while the world watched, now shunted into a little- used room opposite baggage claim, this bust reflects what history has done to the Dulles brothers.

A biography published three years after John Foster Dulles died asserted that "he provoked an extraordinary mixture of veneration and hatred during his lifetime, and since his death, in spite of a surge of emotion in his favor towards the end, his memory has remained contentious and intriguing." That memory faded quickly. In 1971 a journalist wrote that although the Dulles name had not been completely forgotten, "certainly most of the éclat had gone out of it."

John Foster Dulles was, as one biographer wrote, "a secretary of state so powerful and implacable that no government in what was then fervently referred to as the Free World would have dared to make a decision of international importance without first getting his nod of approval." Another biographer called his brother, Allen, "the greatest intelligence officer who ever lived."

"Do you realize my responsibilities?" Allen asked his sister when he was at the peak of his power. "I have to send people out to get killed. Who else in this country in peacetime has the right to do that?"

These uniquely powerful brothers set in motion many of the processes that shape today's world. Understanding who they were, and what they did, is a key to uncovering the obscured roots of upheaval in Asia, Africa, and Latin America.

A book tracing these roots could not have been written in an earlier era. Only long after the Dulles brothers died did the full consequences of their actions become clear. They may have believed that the countries in which they intervened would quickly become stable, prosperous, and free. More often, the opposite happened. Some of the countries they targeted have never recovered. Nor has the world.

This story is rich with lessons for the modern era. It is about exceptionalism, the view that the United States is inherently more moral and farther- seeing than other countries and therefore may behave in ways that others should not. It also addresses the belief that because of its immense power, the United States can not only topple governments but guide the course of history.

To these widely held convictions, the Dulles brothers added two others, both bred into them over many years. One was missionary Christianity, which tells believers that they understand eternal truths and have an obligation to convert the unenlightened. Alongside it was the presumption that protecting the right of large American corporations to operate freely in the world is good for everyone.