Accessibility links
League Of Denial NPR coverage of League of Denial: The NFL, Concussions and the Battle for Truth by Mark Fainaru-Wada and Steve Fainaru. News, author interviews, critics' picks and more.

The NFL, Concussions and the Battle for Truth

by Mark Fainaru-Wada and Steve Fainaru

Title
League Of Denial
Subtitle
The NFL, Concussions and the Battle for Truth
Author
Mark Fainaru-Wada and Steve Fainaru

Mark Fainaru-Wada and his brother Steve Fainaru take an exhaustive look at how the NFL has dealt with allegations that playing football can lead to brain damage.

NPR stories about League Of Denial 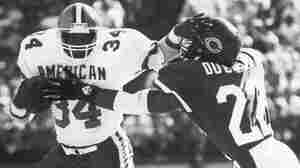 Dave Duerson (right), in 1988. Duerson committed suicide in 2011 and wrote a note that included this request: "Please see that my brain is given to the NFL's brain bank." AP hide caption

October 7, 2013 • Brothers Mark Fainaru-Wada and Steve Fainaru take an exhaustive look at how the NFL has dealt with allegations that playing football can lead to brain damage. They say the NFL has repeatedly avoided tying football to brain injury, even as it has given disability payments to former players with dementia-related conditions.

The national obsession with football, which blew right through the recession, has turned the NFL into the richest and most powerful sports league in the nation and a ubiquitous presence in our lives. ESPN's research has discovered that for the first time, more people prefer watching games on television to attending them. The NFL is broadcast over five networks—including its own—and brings in annual rights fees of $5 billion. In the fall of 2012, 23 of the 25 top-rated shows on TV were NFL games. Once, when the league moved a game from Sunday to Tuesday because of a blizzard, a spokesman predicted that the ratings would be unaffected because the NFL is the "ultimate reality show" and impervious even to acts of God.

The players—the larger-than-life men on whom this $10 billion industry was built—participate in what the historian and former Kansas City Chiefs offensive lineman Michael Oriard has described as "contact ballet." The violence, of course, has always been a big part of football's appeal, but it's cinematic and filtered, almost like a war movie. The destructive force behind the sport was seldom considered. In 2004, a football-loving physicist at the University of Nebraska named Tim Gay set out to calculate the magnitude of a Dick Butkus hit. Applying Newton's second law of motion, he calculated that Butkus, who played at 245 pounds (about 30 pounds lighter than many linebackers today), generated 1,150 pounds of force when slamming into a running back of approximately the same size. "That's the weight of a small adult killer whale!" Gay added helpfully. But rarely did fans dwell on the implications for the men on either side of that transaction.

And then, one Saturday morning in 2002, an obscure forensic pathologist cut open Mike Webster's skull.

That decision—and its consequences, growing by the day—is the subject of this book. There has never been anything like it in the history of sports: a public health crisis that emerged from the playing fields of our twenty-first-century pastime. A small group of research scientists put football under a microscope—literally. What they found was not the obvious, as many people later would claim. We all knew that football was violent and dangerous, that one hit could break your neck or even kill you. No, what the researchers were saying was that the essence of football—the unavoidable head banging that occurs on every play, like a woodpecker jackhammering at a tree—can unleash a cascading series of neurological events that in the end strangles your brain, leaving you unrecognizable.

The researchers who made this discovery—you could count them on one hand—thought NFL executives would embrace their findings, if only to make their product safer. That is not what happened. Instead, the league used its economic, political, and media power to attack pioneering research and try to replace it with its own. Its resources, of course, were considerable. For years, the NFL would co-opt an influential medical journal whose editor in chief was a consultant to the New York Giants. The league used that journal, which some researchers would come to ridicule as "the Journal of No NFL Concussions," to publish an unprecedented series of papers, several of which were rejected by peer reviewers and editors and later disavowed even by some of their own authors. The papers portrayed NFL players as superhuman and impervious to brain damage. They included such eye-popping assertions as "Professional football players do not sustain frequent repetitive blows to the brain on a regular basis." The NFL's flawed research was shaped by a web of conflicting interests. Riddell, the league's official helmet maker, used the research to create and successfully market a helmet it claimed significantly reduced concussions in children—a claim that triggered an investigation by the Federal Trade Commission, which concluded it was false.

The NFL's strategy seemed not unlike that of another powerful industry, the tobacco industry, which had responded to its own existential threat by underwriting questionable science through the creation of its own scientific research council and trying to silence anyone who contradicted it. There are many differences, as we shall see, but one is that football's health crisis featured not millions of anonymous victims but very public figures whose grotesque demises seemed almost impossible to reconcile with their personas. One eight-year NFL veteran would kill himself by drinking antifreeze. Another prominent player would crash his Ford pickup into a tanker truck while leading police on a high-speed chase. Two players, Dave Duerson and Junior Seau, would fire handguns into their chests; Seau, one of the finest linebackers to play the game, used a .357 Magnum that his family didn't know he owned to shoot himself in a guest room of his beach house filled with the memorabilia of a 20-year career. As the crisis grew, the brains of those famous players became valuable scientific commodities. A macabre race ensued among researchers to harvest and study them—even while the bodies were still warm. Minutes after Seau's body was carted out of his house, his oldest son, Tyler, began getting calls seeking his father's brain.

The story is far from over. As this book was being written, nearly 6,000 retired players and their families were suing the league and Riddell for negligence and fraud. Their argument was that the NFL had "propagated its own industry-funded and falsified research" to conceal the link between football and brain damage. One week before the start of the 2013 season, the NFL settled the case—agreeing to pay the players $765 million, plus an expected $200 million in legal fees. The NFL did not admit wrongdoing, but the settlement hardly resolved the question at the core of the league's concussion crisis: How dangerous is football to one's brain? Unlike smoking, there was no scientific consensus about the risks of playing football. One neurosurgeon connected to the NFL said children were more likely to sustain a brain injury riding a bike or falling down. Another neurosurgeon, also connected to the league, called for abolishing tackle football entirely for children younger than 14.

The prevalence of chronic traumatic encephalopathy (CTE)—the name for the insidious disease found in the brains of Seau, Duerson, and the others—is also unknown. The leading expert on the subject is a blond Green Bay Packers fan named Ann McKee, who works out of a redbrick building at the Department of Veterans Affairs outside Boston in an office cluttered with football helmets, bobblehead dolls, and a Packers cheesehead resting atop a plastic heart. In a nearby building, the largest collection of NFL brains is stored in a freezer at −80 degrees Celsius.

By the fall of 2012, McKee had examined the brains of 34 former NFL players. Thirty-three had CTE. We asked her what percentage of NFL players probably had it.

McKee: I don't think everybody has it, but I think it's going to be a shockingly high percentage.

Question: If you believe that there is a shockingly high number of football players who are bound to suffer from it, how can we even justify having people play professional football?

McKee: I think I would lose my audience.