Taking a summer job on a Pacific luxury cruise liner to help his struggling family, Shy anticipates a season of lucrative tips and pretty girlfriends only to have everything radically transformed by a massive California earthquake that jeopardizes the survival of everyone he knows.

NPR stories about The Living 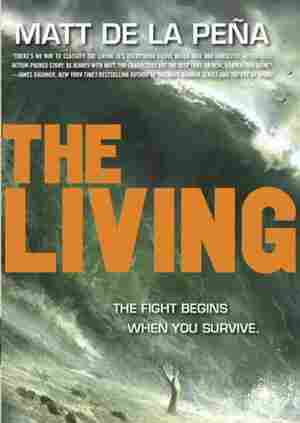 November 23, 2013 • When the earthquake strikes — the big one that Californians have been warned about — Shy finds himself on a cruise ship serving towels to the wealthy patrons. But he's not out of harm's way. Matt de la Pena discusses his new novel, The Living, with NPR's Scott Simon. 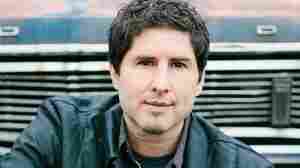 Matt de la Peña is the author of Ball Don't Lie, Mexican WhiteBoy, We Were Here, I Will Save You and, most recently, The Living. Random House Children's Books hide caption

November 11, 2013 • Young adult fiction writer Matt de la Peña didn't finish reading a novel until he was in college. In his Mexican-American family, men who read books were seen as "soft." But he discovered his passion in literature, which he now shares with his young readers and family.

He knew he'd been sleeping a long time because the sun was directly overhead now and beating down hot. The air warm and dry. The ocean lay mostly flat under the brightest blue sky he'd ever seen, like a postcard.

Then everything came rushing back.

The waves and the ship fires and California and his family. He should be on the Lido Deck now, passing out towels to passengers. Miniature golf clubs. Sneaking peeks at every woman in a bikini, including moms. Waiting for Carmen to cruise by with her coffee so they could talk. But the Lido Deck no longer existed because the entire cruise ship was at the bottom of the Pacific. And he was stranded at sea all alone. No other survivors anywhere.

He leaned over the jagged edge, looked directly into the water, and his heart climbed up into his throat.

There were five or six sharks circling beneath his sinking boat. Jaws partly open and full of teeth. Eyes black. He watched, horrified, as one of them broke from the pack, rose up and banged its snout into the bottom of his boat, knocking him on his ass.

"What the hell!" he shouted, angrily pushing himself off one of the corpses and sloshing through the water to pick up the raft oar. Now he was pissed. On top of everything else he had to deal with this? He stood and started beating at the ocean and screaming down the sharks: "Get your asses away from here!"

They dispersed for a few seconds, then re-formed their pack and continued circling.

Shy pulled the oar into the boat and sat in the water trapped. He rocked himself back and forth trying to catch his breath and trying to think, his heart pounding against the inside of his chest as he looked around.

The sweatshirt had come out of the gash in the boat, which was why it had taken on so much water. If he didn't figure out a way to fix it, he'd sink, and if he sank . . . He remembered his grandma's warning in the library: I have pictures of their teeth, though, mijo. They have rows and rows.

Shy wadded up the arm of the sweatshirt a second time, shoved it back into the hole. Then he moved through the bodies and dug back through the supplies.

He pulled out the tarp, ripped open the packaging. But he couldn't figure out how to secure it over the hole, so he tossed it aside, grabbed the fiberglass patch kit. He had to bail out enough water so that the hole was no longer submerged and it had a chance to dry. Only then could he try patching it.

More scooping, two hands at a time, splashing the water overboard as quickly as he could. He did this for what seemed like hours, until his arms and shoulders burned and his back ached. All the while the sharks continued circling the boat. Sometimes knocking against the bottom or lifting their huge, menacing heads out of the water and flashing their teeth.

The sun traveled slowly across the sky and began falling toward the sea. By the time the sky was lit up with colors, the water level inside the boat was down near his ankles.

He kneeled, pulled the sweatshirt arm from the gash. It was no longer underwater, but it was still wet. And all the clothing on the boat was soaked, including his own, so he couldn't dry it. Finally he leaned his face down and blew on the gash, breath after breath, each deep inhale triggering that sharp pain in his ribs.

After several minutes, he felt around the gash with his fingers. It was dry. He opened the kit, positioned the patch over the hole, pasted on a thick coat of resin.

A shark slowly emerged from the water and showed its teeth, gave a strange sideways glance. Shy leaped to his feet and grabbed the oar. He raised it over his head and came down with as much power as he could muster, cracking the shark in the teeth.

"That's right, shark bitch!" he shouted as it ducked back into the water. "Come back up here if you want some more!"

He stood with the oar poised above his head again, but the sharks all stayed underwater.

Eventually Shy sat against the tallest side of the boat and stared up at the swirling sunset sky, picturing Carmen's face when the ship alarm first started blaring. It killed him, that look.

His stomach was starting to cramp from hunger.

The ocean continued whispering to him, the way it had since day one of his first cruise. But he knew he'd never understand.

As the sky grew dim, he moved across the boat and kneeled down to feel around the resin-covered patch. It was completely dry. Strong when he knocked against it with his knuckles. At least the boat wouldn't sink, he told himself. And the sharks had gone away.

Shy's thoughts soon turned to food and water. His stomach grumbled and his mouth was dry as a desert. It seemed unfair to be completely surrounded by water he couldn't drink.

He was staring out over the ocean and rocking himself against his favorite side of the boat when something in the distance caught his eye.

Shy stood and waved his hands. "Over here! Hey!"

He dug into his supplies and fired another flare into the darkening sky, his second. Only four left.

He heard a man's voice in the distance and saw waving.

The oar was back in his hands, but how would he use it? He tried rowing from one side, but it only made the boat turn in a circle. He moved to the very front of the boat, dug the oar into the water on one side and pulled, then quickly switched to the other.

He wasn't able to get much leverage, but to his surprise the boat started inching forward, little by little, in almost a straight line.

A couple of the sharks were back now, swimming out ahead of him.

It took a long time for Shy to get close enough to make out actual people in the dark. He counted seven heads, most kneeling on either side of a raft, paddling toward him by hand, though it wasn't doing much good.

A man he didn't recognize shouted: "Hurry! We don't have much air left!"

There were a few sharks circling the raft, too. And the half-deflated sides were dangerously close to the water.

Shy dug harder as he began recognizing some of the faces staring back.

The oilman. Toni from Destiny. Both wild-eyed, on their hands and knees, paddling.

Then Shy saw a second girl, just behind them.

The blonde he'd had to kick off the Honeymoon Deck during the storm. Addison.