NPR stories about The Beatles 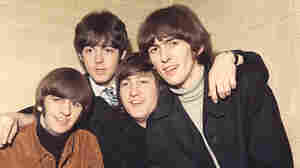 November 27, 2013 • Between 1962 and 1965, The Beatles were featured on 53 BBC radio programs. For The Beatles: The BBC Archives, executive producer Kevin Howlett had to search for many of these recordings, and they weren't easy to find.

In a remarkable night for BBC television, The Beatles dominated the Saturday evening schedule of 7 December 1963. First, The Beatles were seen by 23 million viewers in Juke Box Jury. The show had been an integral part of Saturday night viewing since 1959. Based on an American format, four 'jurors' reviewed a record and then ruled whether it would be a hit or a miss. Presenter David Jacobs rang a bell if the panel's verdict was 'Hit'. A 'Miss' was rejected by the sound of a klaxon. John had appeared on an edition in June 1963, alongside frequent panellist Katie Boyle and the obligatory teenagers: actors Bruce Prochnik (playing the title role in the current West End production of Oliver!) and Caroline Maudling. John voted every one of the records played a 'Miss' – even 'Devil In Disguise' by his first rock 'n' roll hero Elvis Presley. 'Well, I used to go mad on Elvis, like all the groups, but not now. I don't like this and I hate songs with "walk" and "talk" in it... you know, those lyrics: "She walks, she talks". And I don't like the double beat – dum-cha, dum-cha – that bit. It's awful. Poor old Elvis. I've got all his early records and I keep playing them. He mustn't make another like this. But somebody said today he sounds like Bing Crosby now... and he does.' Katie Boyle asked John whether sounding like Bing Crosby was necessarily a bad thing. 'Well, for Elvis... yes', John replied. Within a month of the broadcast, 'Devil In Disguise' was number one in the UK.

Juke Box Jury was usually filmed in London, but the special Beatles edition was recorded in front of members of the group's Northern Area Fan Club in the Empire Theatre, Liverpool. Once again, an Elvis record was selected on the jukebox – 'Kiss Me Quick'.

PAUL: The only thing I don't like about Elvis now is the songs. You know, I love his voice. I used to love all the records like 'Blue Suede Shoes' and 'Heartbreak Hotel'... lovely. But I don't like the songs now. And 'Kiss Me Quick'? It sounds like Blackpool on a sunny day.

GEORGE: I must admit I didn't like it very much. Not at all. It's an old track. And I think, seeing as they're releasing old stuff, if they'd release something like 'My Baby Left Me' it'd be number one, because Elvis is definitely still popular. It's just the song's a load of rubbish. I mean, Elvis is great. He's fine. But it's not for me.

JOHN: Well, I think it'll be a hit because it's Elvis, like people said. But I don't think it'll be very great. I like those hats, though, with 'Kiss Me Quick' on it!

In a review of The Swinging Blue Jeans' version of 'The Hippy Shake', they pointed out the original was by Chan Romero and that they performed it too. Their unanimous judgement that it would be a hit proved to be true. The record that seemed to interest them most was 'The Nitty Gritty' by Shirley Ellis.

JOHN: Er, yeah. I like it. I thought it was somebody else. I've never heard of Shirley Ellis. I like all those kind of things. I'll buy it. But I believe it won't be a hit.

DAVID JACOBS: Who did you think it was?

JOHN: At first I thought it was Mary Wells. I liked that.

PAUL: The same as he said. In fact, I will say exactly the same, 'cause I agree with him. I love these kind of records, but I don't think this one will be a hit, 'cause I dunno... It doesn't say anything.

RINGO: You know, we all like this sort of thing. I'd buy it, but I don't think it'll be a hit.

GEORGE: Well, it definitely won't be a hit, in England anyway. It probably will be, or probably is already in the States. But I don't think it'll be a hit. The public haven't got round to that sort of stuff yet. When they do, I mean, that would be...

JACOBS: So, you think that our teenagers are behind the Americans in their tastes?

GEORGE: Yeah. I mean, just lately they've been going for some more way-out stuff, and rhythm and blues, and this sort of thing we've always liked. We've liked it for years. And it still hasn't caught on in England.

PAUL: Well, it's just that people who buy the records, their taste doesn't match the teenagers generally. Lots of teenagers love this kind of music but don't buy it, because they don't buy records.